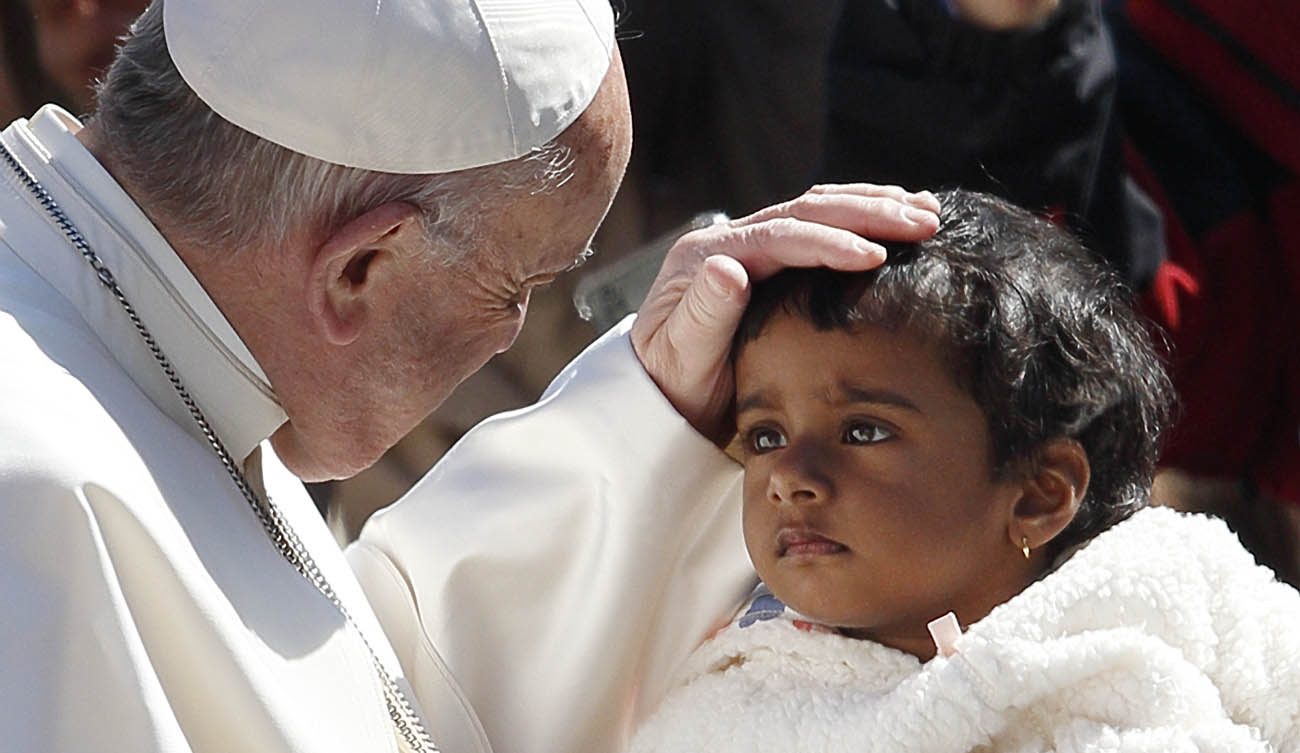 Pope Francis greets a child during his general audience in St. Peter's Square at the Vatican March 29. (CNS photo/Paul Haring)

Real Christian hope “is not based on our word, but on God’s Word” and promises of salvation and eternal life, the pope said during his general audience in St. Peter’s Square March 29.

Continuing a series of reflections on how the Apostle Paul describes the nature of Christian hope, the pope looked at how Abraham’s faith is held up as a model for everyone in the apostle’s Letter to the Romans (4:16-25).

Despite all logic — Abraham was old and his wife infertile — Abraham “believed, hoping against hope that he would become ‘the father of many nations,'” which shows how faith is so closely connected to hope, the pope said.

“Our hope is not based on human reasoning, predictions and assurances,” he said; real hope arises “where there is no more hope, where there is nothing left to hope for.”

True hope “is rooted in faith and, precisely for this reason, it is able to go beyond all hope” because it is built on faith in God and his promise, he said.

“This is the paradox and, at the same time, the strongest part,” he said, because from a human point of view, that promise seems “unsure and unforeseeable.”

Looking at the people gathered for the general audience, the pope asked them if they really believed in God’s love for them and his promise of eternal life.

“There is only one price” to be paid for this, he said. “Opening your heart. Open your hearts and God’s power will carry you forward. He will do miraculous things and he will teach you what hope is.”

Just “open your heart to faith and he will do the rest,” he added.

Mary, too, believed in the unbelievable when the angel told her she would become the mother of God, the pope said in remarks to pilgrims from Arabic-speaking countries, particularly Iraq.

Like Mary, they are called to embrace that which they do not understand God is doing, and to open their hearts and minds to him, so that his will may be done, he said.

He later launched an appeal for more to be done to protect civilians in Iraq, reaffirming his prayers for civilians trapped in parts of Mosul and those displaced by war.

The pope also greeted a delegation of Iraqi authorities representing Shiites and Sunnis, and one representing Christians and other religious minorities, who were accompanied by Cardinal Jean-Louis Tauran, president of the Pontifical Council for Interreligious Dialogue.

“The richness of the beloved Iraqi nation lies precisely in this mosaic that represents unity in diversity, the strength of union, prosperity in harmony,” the pope said.

He encouraged them to continue their efforts and invited people to pray that “Iraq may find peace, unity and prosperity through reconciliation and harmony among its diverse ethnic and religious communities.”

PREVIOUS: Congo’s bishops give up on peace mediation

NEXT: This time, Guterres visits Zaatari refugees as the U.N.’s top official