Reaction mixed to EU ruling on religious symbols in workplace

MANCHESTER, England (CNS) — Religious leaders have criticized a ruling by the European Union’s highest court that could allow employers to prohibit staff from wearing visible religious symbols in the workplace.

However, British organizations set up to defend Christians from harassment in the workplace were untroubled by the ruling.

The European Court of Justice, based in Luxembourg, ruled differently on two cases March 14. In one case, it said a firm that demanded a Muslim employee removed her headscarf was not in breach of an EU employment directive on freedom of religion because it banned the wearing of “any political, philosophical or religious sign.”

But Catholic Bishop Philip Egan of Portsmouth, England, told Catholic News Service March 15 the ruling was “totalitarian” and could lead to Christians being forced to remove a crucifix or a St. Christopher medal.

“It limits the religious expression of an individual,” said Bishop Egan, who has encouraged the people of his diocese to be open about their faith.

“This is a grave infringement of human rights,” he said. “It is a disproportionate application, like cracking a nut with a huge sledgehammer … before we know it we are going to have huge restrictions.”

The court considered the case of Samira Achbita, a receptionist for the Belgian branch of G4S Secure Solutions, a security company. Achbita was fired in 2006 for refusing to take off her Islamic headscarf. Asma Bougnaoui, a French design engineer fired from Micropole SA, an information technology consultancy firm, was fired when a client objected to her wearing a headscarf. 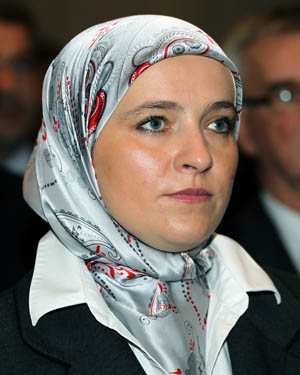 Amra Babic, Europe’s first mayor to wear a hijab, is pictured during a 2012 news conference in Sarajevo, Bosnia-Herzegovina. Religious leaders have criticized a ruling by the European Union’s highest court that could allow employers to prohibit staff from wearing visible religious symbols in the workplace. (CNS photo/Fehim Demir, EPA)

The court found no discrimination in the first case because “G4S’s internal rule refers to the wearing of visible signs of political, philosophical or religious beliefs and therefore covers any manifestation of such beliefs without distinction.”

But in the Bougnaoui case, the court concluded that “the willingness of an employer to take account of the wishes of a customer no longer to have the employer’s services provided by a worker wearing an Islamic headscarf cannot be considered an occupational requirement that could rule out discrimination.”

The Church of England, in a statement posted on its website March 14, said the ruling on Achbita “raises significant questions about freedom of religion and its free expression, whether it be Sikhism and the wearing of turbans and kara through to the wearing of a cross.”

The ruling was criticized by the London-based Conference of European Rabbis as a sign that faith communities were “no longer welcome” in Europe, and by the Islamic Human Rights Commission, also based in London.

“This gives legal cover to what is essentially an ongoing hate campaign to make Muslims second-class citizens in Europe,” said Arzu Merali, head of research at the Islamic Human Rights Commission, in a statement posted on the group’s website March 14.

She said: “It will only increase feelings of marginalization and disenfranchisement in Muslim communities.”

However, Neil Addison, director of the Liverpool-based Thomas More Legal Centre, said: “I am perfectly happy with it.”

He told CNS in a March 15 telephone interview the blanket ban on symbols must include nonreligious manifestations of belief such as “wearing a gay rights ribbon.”

“You can’t ban one without banning the other,” he said, adding: “The starting point is that you are at work to work and the employer has a right to determine its image.”

Andrea Williams, chief executive of the London-based Christian Legal Centre, said the judgment did not overturn the 2013 ruling at the European Court of Human Rights in Strasbourg, France. That ruling stated that British Airways could not prohibit the wearing of the cross as part of its uniform policy.

The ruling, she said, “has not changed the law in the United Kingdom or anywhere else in the European Union.”

She said: “Precisely stated, the Court of Justice made no ruling on the legality of prohibiting the wearing of religious symbols at work, it simply clarified a point of law in relation to defining the directive, and left it to the national courts to address the substantive questions involved.

“The banning of headscarves, apart from other religious symbols, is not novel to European law,” Williams said. “The European Court of Human Rights has upheld bans on the wearing of Islamic headscarves in cases involving Turkey, Switzerland and France for reasons as diverse as the incompatibility of Shariah law with democratic principles to the protection of women from discrimination and their devaluation or oppression.”

PREVIOUS: The path toward corruption is a slippery road, pope says

NEXT: Irish archbishop: St. Patrick was an ‘undocumented migrant’