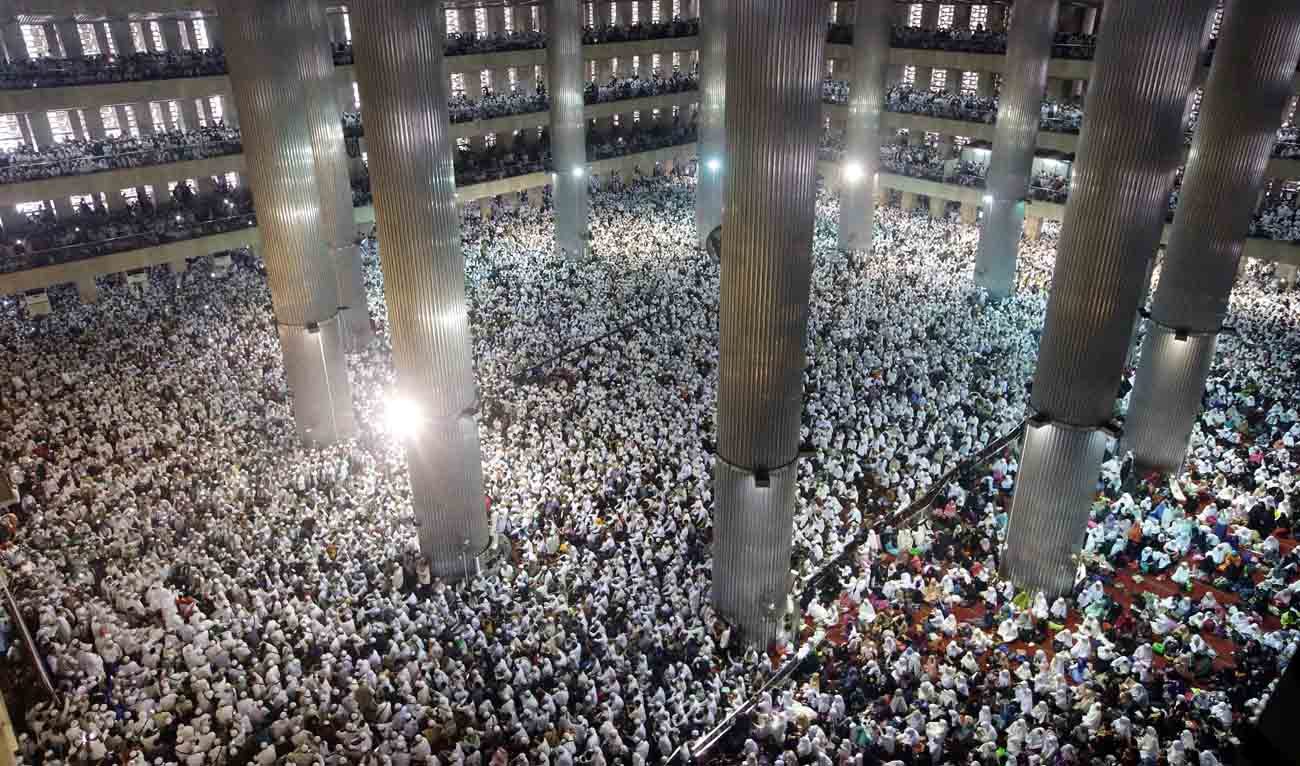 Indonesian muslims pray during mass prayers at Istiqlal Mosque in Jakarta, Indonesia, Feb. 11. Catholic engagement with Islam must be based on goodwill, said Father Diego Sarrio Cucarella, a member of the Missionaries of Africa and director of studies at the Pontifical Institute for Arabic and Islamic Studies in Rome. (CNS photo/Bagus Indahono, EPA)

VATICAN CITY (CNS) — Between their morning cappuccino and their evening plate of pasta, a group of Catholic students from around the world are studying Arabic and Islam in the heart of Rome’s Trastevere neighborhood.

Since 1926, the Missionaries of Africa have sponsored the Pontifical Institute for Arabic and Islamic Studies, preparing students to live and minister in the Muslim world, promoting dialogue and mutual respect.

“Catholic engagement with Islam, in the spirit and light of Vatican II, must be based on goodwill and an objective knowledge of the other tradition, and not on misconceptions and false ideas inherited from centuries of conflict and hostility,” said Father Diego Sarrio Cucarella, a Missionary of Africa and director of studies at the institute, which is known by its Italian acronym, PISAI.

“PISAI seeks to prepare its students for an active role in Muslim-Christian relations, whether in the academic or pastoral field, or society at large,” he said. The 54 students enrolled in 2016-17 come from 22 countries; 35 of the students are priests or religious and 19 are laypeople.

The largest group of students — 22 of the 54 — come from Africa, which “reflects the growing presence of African students in the pontifical universities and institutes in Rome,” Father Sarrio said, but also reflects the special support the Missionaries of Africa give the continent’s dioceses. The missionaries are sponsoring the studies of five diocesan priests from Africa.

The institute’s U.S. connections are found in the student body, among the professors and in a formal collaboration with Georgetown University in Washington, D.C. Father Sarrio earned his doctorate at Georgetown as did Franciscan Father Jason Welle, who is teaching at PISAI. But, even more formally, Jesuit Father Thomas Michel, an Islamic scholar who had been teaching at the Georgetown campus in Doha, Qatar, is spending the 2016-17 academic year at PISAI and gave the first “Georgetown Lecture on Contemporary Islam” at the institute in late February.

John Borelli, special assistant to the Georgetown president for Catholic identity and dialogue, said officials at PISAI and the Vatican Congregation for Catholic Education suggested Georgetown and PISAI develop a deeper relationship, which is something Georgetown officials also were interested in. “Both institutions are committed to promoting understanding between Christians and Muslims and thus being of assistance to the implementation of the church’s commitment to interreligious dialogue and relations,” he said.

PISAI’s reputation is built on its emphasis on students learning Arabic — many of the courses are taught in Arabic — and on giving students a solid understanding of classical Islam, “the formative centuries during which Islam developed its theological, philosophical and legal thought,” Father Sarrio said. But as Islam around the world has become “increasingly complex,” he said, PISAI asked Georgetown to collaborate particularly with courses and lectures on contemporary Islam, where “they have a recognized expertise.”

Father Welle, who grew up in rural Minnesota, met the Franciscans and Islam when traveling in the Middle East with other undergraduates from St. Olaf College in Northfield. “The languages and cultures of the region took hold of my imagination and never let go,” he told Catholic News Service.

“Many Franciscans through the centuries have committed themselves to developing relationships with our Muslim brothers and sisters, but the path of the scholar has a special place in the dialogue,” he said. “Some of the greatest heroes of the Islamic tradition are its outstanding scholars.

“When Christians commit ourselves to searching for knowledge within that tradition as well as within our own, it shows our Muslim brothers and sisters that we are serious about understanding them and their tradition,” Father Welle said.

So, he said, when engaged in dialogue, “I am most impressed by Muslim scholars who clearly exhibit that their search for knowledge has a higher purpose, and I pray that they encounter Christians who exhibit that same higher purpose.”

Peter Dziedzic, one of the U.S. students at PISAI, said many of the political and cultural references to Islam in the United States today are “discouraging, because I would have assumed that over a decade after 9/11 we would have had a higher level of religious literacy” and knowledge of the Islam the vast majority of Muslims believe in. President Donald Trump’s travel restrictions, he said, are particularly striking given the “deep and radical hospitality” he has experienced in predominantly Muslim countries.

Dziedzic came to PISAI after studies at DePaul University in Chicago, as a Russell Berrie fellow at Rome’s Pontifical University of St. Thomas and more than 16 months as a Fulbright scholar in Morocco. He currently is a member of the Lay Centre at Foyer Unitas, an international and interreligious community of lay scholars in Rome.

“In a globalizing world, you have to study other traditions. You cannot just ignore them and you cannot try to develop a sound theology without considering them,” he said.

“If more Christians knew Muslims, if more Democrats knew Republicans, if they knew their stories, they would understand where other people are coming from,” Dziedzic said. “It’s impossible to hate or fear the ‘other’ if you have a face, or tears or laughter” in mind to confront the stereotypical claims made about them.

NEXT: Dutch church leaders speak out against populist shift