What ‘Hosanna in the highest’ really means 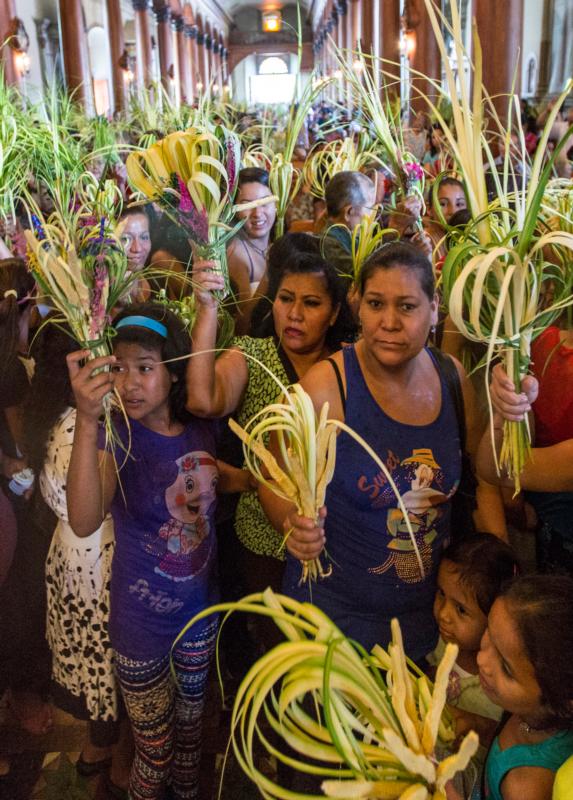 Parishioners at St. Lucy Parish in Suchitoto, El Salvador, wait to have their palms blessed during a Palm Sunday Mass March 29, 2015. The liturgy on Palm Sunday begins differently from most Masses. (CNS photo/Octavio Duran)

The liturgy on Palm Sunday begins differently from most Masses. In most Catholic churches, people gather outside or in the vestibule where they hear a reading from the Gospel according to Matthew (21:1-11) about Jesus’ triumphant entry into Jerusalem. Palms are then blessed and the congregation processes into the church together.

While all four of the Gospel accounts tell basically the same story of what happened that day in Jerusalem, only Matthew uses these words: “Hosanna to the Son of David; blessed is he who comes in the name of the Lord; hosanna in the highest” (21:9). What exactly does the word “hosanna” mean and why would the crowd shout it about Jesus at this time?

Hosanna is a transliteration of the Hebrew word “hosi-ah-na,” which means to save or rescue, or designates the person who saves or rescues. According to Strong’s Concordance the “-na” suffix is used to express “intense emotion.”

While originally the word was used as prayer of intercession asking for God to intervene and save his people (Psalm 118:25 says, “Lord, grant salvation! Lord, grant good fortune!”) by Jesus’ day the word had become a shout of jubilation, a statement of praise because God had saved his people. At the Jewish feast of Tabernacles and at Passover the word continues to be used in this way.

But there is more to this phrase in Matthew than just the word “hosanna.” In verse 9, Matthew continues with the phrase “blessed is he who comes in the name of the Lord,” which comes from Psalm 118:26.

This is significant because, according to the comments in the New American Bible, Psalm 118 is “a thanksgiving liturgy” that was used during a procession of the king and the people into the Temple.

The psalm recalls and celebrates how God faithfully responded to Israel’s pleas for assistance. This psalm was also used as a blessing given to pilgrims when they arrived at the Temple in Jerusalem.

Gradually this phrase saw its meaning develop as well, acquiring what Pope Benedict XVI in his book “Jesus of Nazareth” described as “messianic significance.”

“It had become,” Pope Benedict writes, “praise of Jesus, a greeting to him as the one who comes in the name of the Lord, the one awaited and proclaimed by all the promises.” So, in shouting “Hosanna” as Jesus entered Jerusalem his disciples were acknowledging him as the Messiah, the promised one sent from God to save Israel.

In so doing we recognize once again (as the crowd did on that day in Jerusalem) that Jesus is Lord, the promised one of God who comes to save us. Our prayers have been answered. Now we celebrate God’s saving power and love for us.

Hosanna in the highest.

NEXT: At Palm Sunday, an unflinching look into the Passion of Jesus