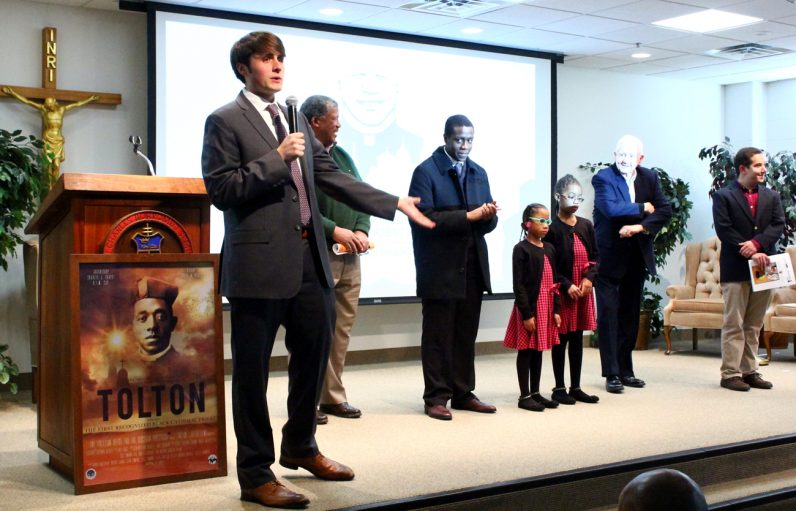 Bill Rose, director and producer of “Tolton,” introduces those who participated in the filming of the movie.

The premiere of Joyful Films’ documentary “Tolton,” telling the story of the 19th century priest Father Augustus Tolton, was presented by the archdiocesan Office for Vocations to the Diocesan Priesthood and cohosted by the Office for Black Catholics.

Besides making an appeal for young men to discern a vocation to priesthood through the testimony of seminarians, particularly those of color, the event also garnered attention for the canonization of the Servant of God Father Tolton. 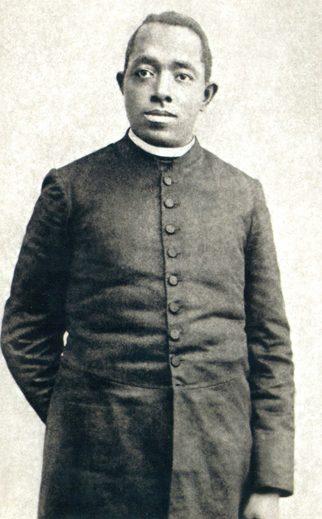 His cause for sainthood was launched in 2010 by the late archbishop of Chicago, Cardinal Francis George, and the process is currently under review at the Vatican.

During the program at St. Charles Seminary, Father Stephen D. Thorne, pastor of St. Martin de Porres Parish in North Philadelphia and the African American vocations coordinator for the Philadelphia Archdiocese, explained that although there were other priests of African descent serving in America before Father Tolton, they were “passing” for white. Father Tolton was the first openly Black priest, he said.

Father Gerard Jordan, a Norbertine priest based at Daylesford Abbey in Paoli, has been working hard in recent years to spread the word about Father Tolton by visiting parishes throughout the archdiocese and updating them on the progress of the cause.

He got involved in the work after Bishop Joseph N. Perry, an auxiliary bishop of the Archdiocese of Chicago, asked Father Jordan to accept speaking engagements about Father Tolton because the bishop had more requests to speak about the cause than he could commit to.

“When you go into his life story you can see the connection through the Jim Crow era, past the civil rights movement and even to the election of President Barack Obama,” Father Jordan said. “He accomplished much in civil rights and then became the first Black man to be recognized as an ordained Catholic priest in North America.”

Father Jordan said there have already been two miracles attributed to Servant of God Father Tolton that have been submitted to Rome for review. There is also a collection of 90 letters that Father Tolton wrote that showed how closely his life modeled that of Jesus Christ, according to Father Jordan.

The narrator of the documentary was Bishop Perry, and it also featured in interviews or presentations Philadelphia Archbishop Charles J. Chaput and several priests and parishioners of the Philadelphia Archdiocese.

Deacon William Bradley, the director of the Office for Black Catholics, welcomed the guests to the seminary, after which vocation director Father Stephen DeLacy offered a prayer.

Paula Manchester, an adjunct theology professor at St. Charles Seminary, gave a brief overview of the history of African American Catholics in her presentation, “From Slave to Priest.”

Moses traced his journey from New York City to staying with relatives in North Philadelphia. It was while at St. Martin de Porres Parish that he was encouraged by Father Thorne to discern a possible call to the priesthood.

Flores readily admitted that growing up he was “culturally Catholic.” He said since he did not attend Catholic school or attend Mass regularly he only had a cursory knowledge of the faith. That all changed around 2007 when the now 26-year-old seminarian realized his call was not to working as a welder but to the priesthood. “I am filled with peace, and find joy in reading the Bible,” Flores said.

Bill Rose, the Joyful Films director and producer, also shared an anecdote of his realization that God was not calling him to the priesthood. He said after taking theology courses at St. Charles Seminary and praying about it, he realized that filmmaking was his vocation. He also introduced those present to his fiancé.

Also present was Ben Melaku, an Ethiopian by birth who is enrolled at the Catholic Theological University in Chicago while in formation for the priesthood with the Vincentian order. He spent a one-year internship last year at the Shrine of the Miraculous Medal in Philadelphia’s Germantown section.

“Since I am from Chicago I was already familiar with the Tolton story,” Melaku said.

He recounted how in his courses on Black spirituality he learned about leaders such as Dr. Thurman Evans and Sister Thea Bowman, and Father Tolton, who “served as an inspiration to many of the seminarians,” Melaku said.

“So, I loved the film. I thought it was something that needed to done. I am more inspired now. Since I am also Black his story inspires me. I hope he is canonized a saint.”

The program concluded with Deacon Bradley leading the audience in a prayer for the cause of Father Tolton, written by Bishop Perry.

“O God, we give you thanks for your servant and priest, Father Augustus Tolton, who labored among us in times of contradiction, times that were both beautiful and paradoxical,” the prayer began. “His ministry helped lay the foundation for a truly Catholic gathering in faith in our time. We stand in the shadow of his ministry. May his life continue to inspire us and imbue us with that confidence and hope that will forge a new evangelization for the Church we love.”

Augustus Tolton was born in Missouri in 1854 and was reared as a Catholic, since his mother practiced the faith. He and his parents were previously enslaved but escaped to freedom. He became an ordained Catholic priest in Chicago in 1885 at the age of 31.

Father Tolton served several parishes in Chicago and then led a mission in the Society of St. Augustine. He passed away during a Chicago summer heatwave in 1897. 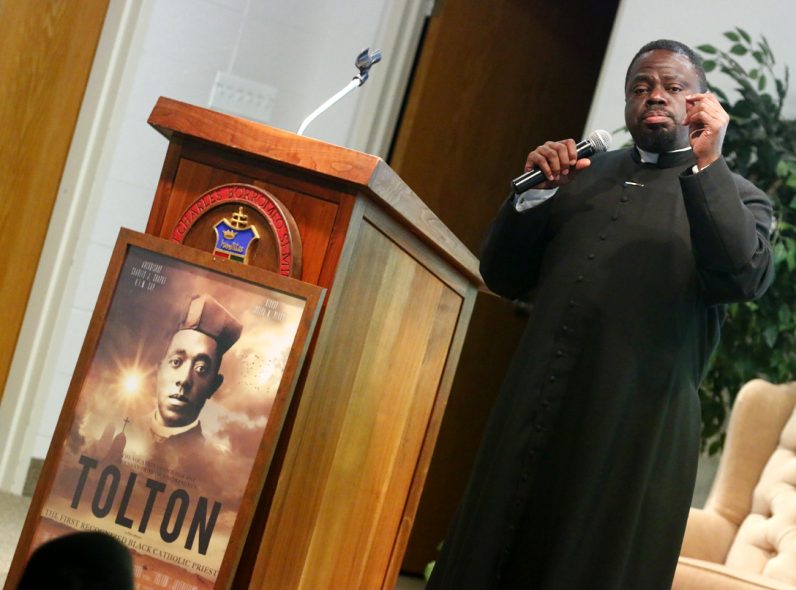 Seminarian Jamey Moses speaks on his life’s journey that led him to discern the priesthood at St. Charles Borromeo Seminary. (Sarah Webb)

NEXT: Priest charged with stealing $500K from fund for clergy retirement home