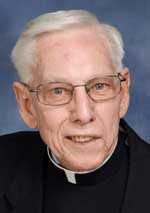 A priest of the Archdiocese of Philadelphia responsible for a retirement home for priests faces federal charges of embezzling more than $535,000 from that same home.

Msgr. William A. Dombrow, 77, was charged by the U.S. District Attorney in Philadelphia on April 5 with four counts of wire fraud in a scheme he is alleged to have devised to siphon off funds intended for care of retired archdiocesan priests at Villa St. Joseph, Darby, where he has served as the rector since 2005.

Catholic Human Services of the archdiocese operates the nursing care and residence for 50 retired and ill archdiocesan priests.

The District Attorney alleges that Msgr. Dombrow set up an account at Sharon Savings Bank in Darby unbeknownst to the archdiocese, directed money from the estates of retired or deceased priests as well as bequests of lay donors to Villa St. Joseph, and transferred money electronically for his personal use.

The scheme is alleged to have begun in December 2007 and continued through May 2016. In a statement, the District Attorney charges that the priest “had sole access” to the bank account, “which was funded by gifts from wills and life insurance proceeds that were intended for the archdiocese.”

Father Rogers, named in the 2005 Philadelphia Grand Jury report on child sexual abuse by clergy, died in February 2015 after living at the Villa since 1998, and for 12 years under its Prayer and Penance program.

Developed by the archdiocese in response to the clergy abuse scandal in Philadelphia, the program is designed to house archdiocesan priests, stripped of ministerial faculties, who have been found credibly accused of sexual abuse of minors.

In a statement April 6, the Philadelphia Archdiocese said Sharon Savings Bank alerted the archdiocese last summer to “irregularities” about an account connected to the Villa.

“Upon review of information supplied by the bank, this account was immediately frozen,” said archdiocesan spokesman Ken Gavin. “At that time, the matter was referred to law enforcement by the archdiocese and Msgr. William Dombrow’s priestly faculties as well as his administrative responsibilities were restricted. Throughout the investigation, the archdiocese has cooperated fully with law enforcement.”

The FBI and the Darby Police Department cooperated in the investigation into the priest’s alleged actions.

The District Attorney’s office expects Msgr. Dombrow to plead guilty to the charges by the end of April. If convicted on all charges he faces a maximum of 80 years in jail plus fines, and three years of supervised release.

Msgr. Dombrow was ordained in 1970 for the archdiocese. He has served as pastor and parochial vicar at several archdiocesan parishes, chairman of the Archdiocesan Priests’ Committee on Alcoholism and director of the Matt Talbot-Emmaus Institute in Philadelphia, a former program of the archdiocese.

NEXT: Take Action Sunday coming in support of life