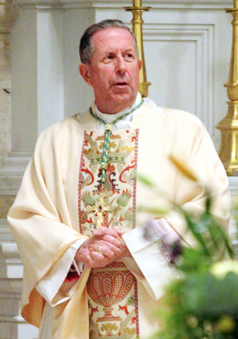 Archbishop James P. Green is shown in a 2016 file photo celebrating his 40th anniversary of priesthood during a Mass at St. Charles Seminary. He was ordained a priest of the Philadelphia Archdiocese in 1976 and has served in the Vatican’s diplomatic corps since 2003. (Photo by Sarah Webb)

Archbishop James P. Green, a Philadelphia native and former priest of the Archdiocese of Philadelphia, has been named by Pope Francis as apostolic nuncio to Sweden and Iceland. The appointment was announced in Rome April 6.

The archbishop currently serves as nuncio to Peru.

Ordained a priest in 1976 by the late Cardinal John Krol, Archbishop Green, 66, has served the Holy See since 1987 and in the Vatican’s diplomatic corps since 2003.

The former member of St. Timothy Parish in Northeast Philadelphia and graduate of Father Judge High School and St. Charles Borromeo Seminary was ordained an archbishop in 2006 by Pope Benedict XVI.

Archbishop Green has been assigned to several countries in Europe and the Far East and has been posted as apostolic nuncio, a type of ambassador for the Holy See, in southern Africa and Peru.

He also previously served in the nunciature in Scandinavia, based in Denmark.

NEXT: Justice Samuel Alito will speak at St. Charles Seminary in May