New name, new energy to draw the young back into church 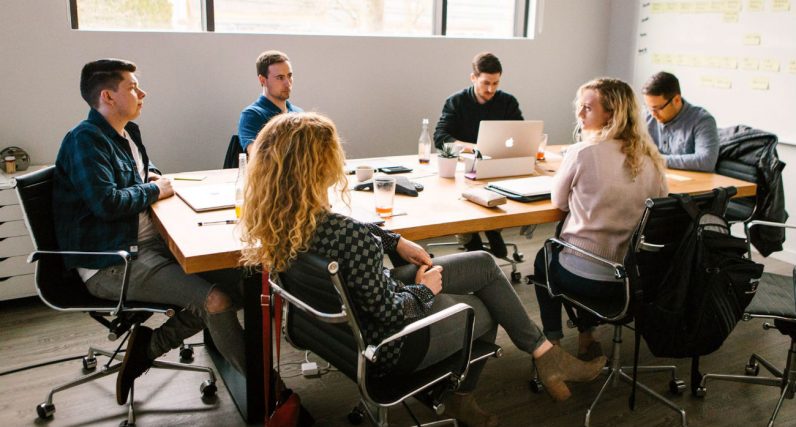 Staff members and a consulting team plan strategy and a brand name for Anthem, the new ministry for youth and young adults in the Archdiocese of Philadelphia.

Surveys say the Catholic Church in the United States is losing a generation of leaders. Young people — in particular the millennial generation born between roughly the early 1980s to the late 1990s — are walking away from their faith in droves.

Fully 41 percent of American adults of all ages who say they were raised Catholic now no longer identify themselves as such, according to a 2014 Pew Research Center survey. 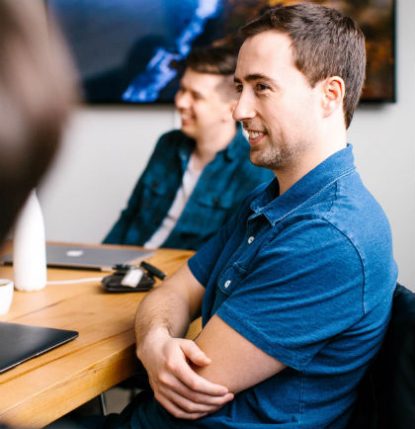 Jacob King, director of Anthem, the youth and young adult ministry of the Archdiocese of Philadelphia.

The most alarming indicator for Jacob King is that among the group that has left the church, 79 percent have done so by the age of 23.

King was among them at one time as a teenager, but today he is a young man of 32 on a mission to reconnect young adults and youth with the Catholic faith of their heritage by proposing it in a whole new way.

He is the director of the Archdiocese of Philadelphia’s initiative in this area, which formerly was called the Office for Youth and Young Adults until it closed in 2012. The new name for the office he leads, Anthem, reflects in one word a shift in outlook and in strategy for the church.

“We have to present (the Catholic faith) in a whole new way,” King said. “We have to start with new directions, things (young people) haven’t heard, and present the church in a different way, hoping they’ll give it a second thought.”

The name Anthem, chosen through a planning process facilitated by the Canadian consulting firm Glass Canvas, has a universal appeal because while it has a secular connotation it also has a religious meaning related to biblically rooted sacred music. “It has a Christian undertone but it’s not something that would sound like church,” King said.

He and his team, which includes assistant director Meghan Mastroianni and events coordinator Abby Gutowski, identified characteristics of the church including authority and teaching, and that of secular culture, which emphasizes friendships. They noticed that young people tend to strongly desire friendly relationships, so they developed their Anthem “brand name” and its focus in that direction.

“We realized we need to be more toward the secular and friend (view), and invite people into a relationship,” King said. “It’s a new way of looking at the church (as) a relationship with Jesus.”

That orientation might be new to young people who for whatever reasons have developed an unfavorable view of the church, and because of that, have not explored developing a relationship with Christ. 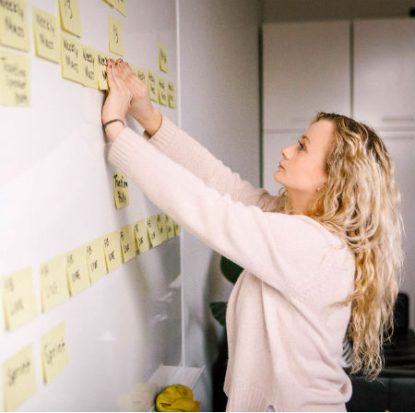 Gutowski, the 24-year-old staff member, explained how many young people perceive the church and their role in it: You first learn about behavior and moral living, then about Jesus, and only then are you invited into the church community — if you have demonstrated the first two.

“Truthfully, it’s a little bit backwards,” Gutowski said. “To appeal to (young people), you can’t start out with behavior. That comes (later, when) you’re not even looking at them as rules. Those are things you are going to desire to do because you already have that relationship with Jesus.”

Emphasizing the invitation to a welcoming community based on relationship with Jesus, then exploring moral teachings, flips the church perception on its head, and is most likely to attract young people, the Anthem staff believe.

“First, you belong,” said Gutowski. “It doesn’t matter where you are in life; whether you are a beginner, a cradle Catholic, still unsure why we do the things we do. No matter who you are, you belong. And once you belong, you’re going to desire to know more. Once you have that from the start and you age in that relationship, the behavior will come.”

Only when young people feel they belong to a church that welcomes them and in which they experience their relationship with God can Anthem begin to address hot-button issues and form youths in the faith.

Popular misconceptions on what the church teaches on moral issues “is what pushes young people away from the church,” Gutowski said. “They think Catholics hate those who are different, those who don’t fit in. We’re actually all about love and mercy.”

Getting the attention of millennials who are no longer in a Catholic school setting and who are pulled by so many secular forces will be challenging.

That is why Anthem is planning to host an annual large-scale regional concert event with big-name secular artists to attract young people who otherwise are not inclined to give the Catholic Church a second look.

They are drawn to big parties and festivals because they are fun, “and if we’re not offering something of that caliber, they’re not going to want to come,” Gutowski said. “We have to bring that entertainment value to the events that we do.”

Also in the planning are numerous smaller events with speakers and service activities hosted in more intimate settings throughout the archdiocese. Some events would be geared for young adults, others for teenagers and youths, with respect to the differences in age and interests.

Another goal for Anthem, besides hosting events, is to support and train parish youth ministers and leaders of parish-based young adult groups. Such programmatic support and training from the archdiocese, King believes, will free those youth leaders to get out from behind their desks and into the community where they can entice more young people to belong.

Just as St. Augustine sought God with a restless heart more than 15 centuries ago and proclaimed “our hearts are restless until they rest in thee,” King believes the apparent drifting from faith by today’s young people is itself an opportunity for a new evangelization.

“The Catholic Church has that fullness of relationship with Christ,” King said, calling it “a love affair where you can fall the most in love with Christ and the sacraments that really draw (people) into Christ.”

For the Anthem ministry, “the goal is walking with someone all the way from having no faith up to discipleship and to wanting to give my life to God,” he said.

PREVIOUS: Sacred art works to be auctioned, sold this Saturday

NEXT: In age of cyberattacks, parish computers, data at higher risk