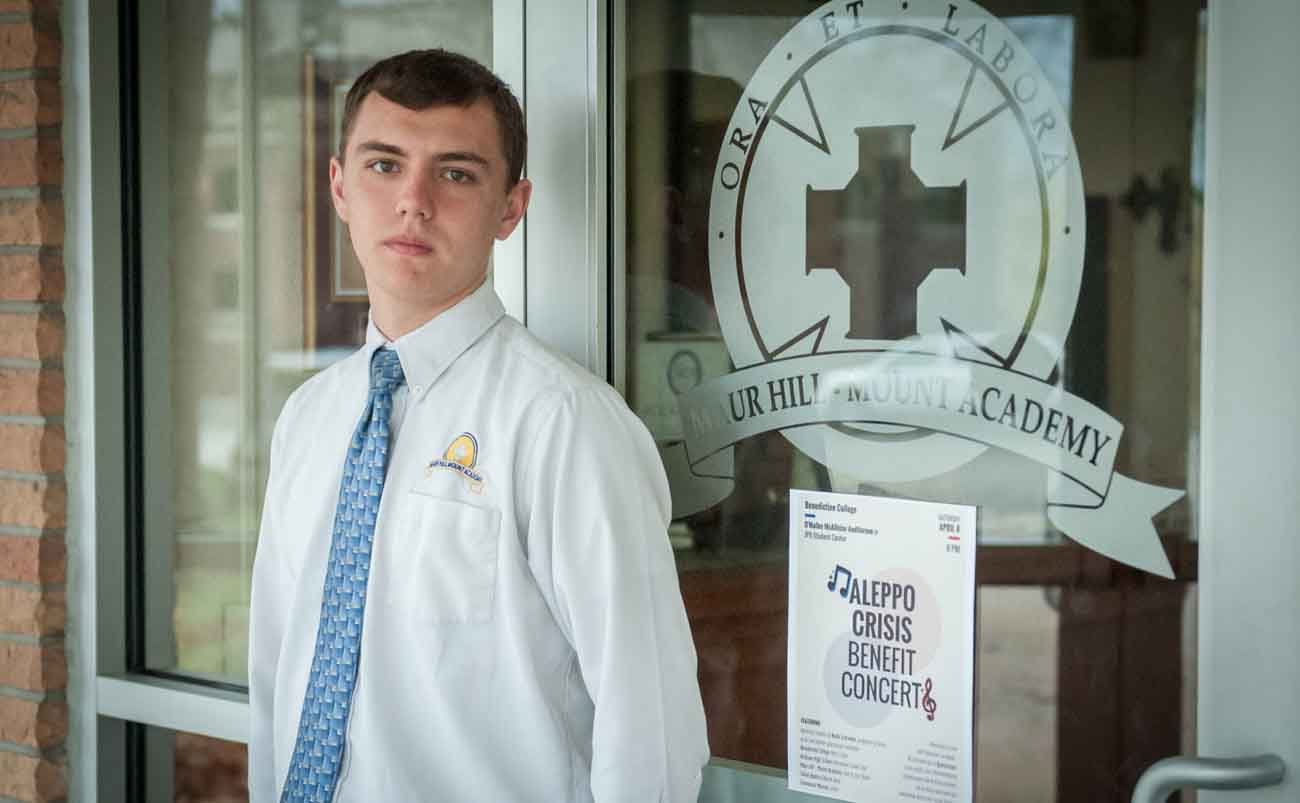 Not far enough for one Maur Hill-Mount Academy senior to decide it wasn’t his problem.

When Christopher Rziha’s mother forwarded him an email from a woman named Danielle Blosser and an organization named Questscope, he read it with interest.

The email was soliciting emergency funds for the refugee centers providing aid for those displaced by the violence in Aleppo.

Rziha wanted more information — about the problems in the war-torn country and what Questscope was doing about it.

So, Rachel Stone, Questscope communications officer, explained its work in an email to the Atchison resident.

“For over 25 years, Questscope has worked inside Jordan and Syria and the MENA (Middle East and North Africa) region with young people and their communities whose lives have been devastated by war and poverty,” Stone wrote. “We provide alternative education, mentorship (including spiritual formation and psychosocial support) and emergency assistance.

“In the current crisis inside Syria, Questscope has supported over 600,000 people who have been made homeless (internally displaced) by this conflict in over 100 locations throughout the country,” she said.

“Our team of 300 staff and 1,500 volunteers,” Stone concluded, “provides food, water, medicine, sanitation, psychosocial counseling and support, nonfood items (primarily clothing) and education for out-of-school children. We are currently among the largest distributors of emergency food aid in Aleppo, where one third of our Syria team currently operates.”

That was enough for Rziha.

He took the idea of raising money for Aleppo to the pastor of St. Benedict Parish, Benedictine Father Jeremy Heppler. Together, they brainstormed ideas.

“We were leaning more toward how we can use the talents of our community and parish,” Father Heppler told The Leaven, newspaper of the Archdiocese of Kansas City. “We knew there was a lot of musical talent here. Christopher basically took it from there.”

Father Heppler said he has been impressed with the senior’s initiative to take on a project of this magnitude.

“He really took the lead on this and showed what we can all do if we put our minds to it,” the priest said. “He’s done such a good job with it all.”

Nadia Schroeder, a professor of Arabic at the University of Kansas in Lawrence, was enlisted to make opening remarks. Schroeder has worked actively with Questscope, www.questscope.org.

In interviews in advance of the concert, Rziha and Father Heppler both said they expected the night to be a bit of an eye-opener for those unfamiliar with the conditions in Syria.

Rziha said he hoped it would “cause people to think about their life and what they have in relation to others who may not be able to enjoy all the comforts of home or may not even have a home.”

Although this is the first time Rziha has planned a large event, he feels the support he received carried him through “in putting this all together” and he was grateful for it.

“It helps me to know that it’s God’s will when it all falls into place so perfectly,” he said. “Stuff I would have never even dreamed being able to do — all the people that were in my life at the right time — I’m grateful to God for that.”

Hunninghake writes for The Leaven, newspaper of the Archdiocese of Kansas City.