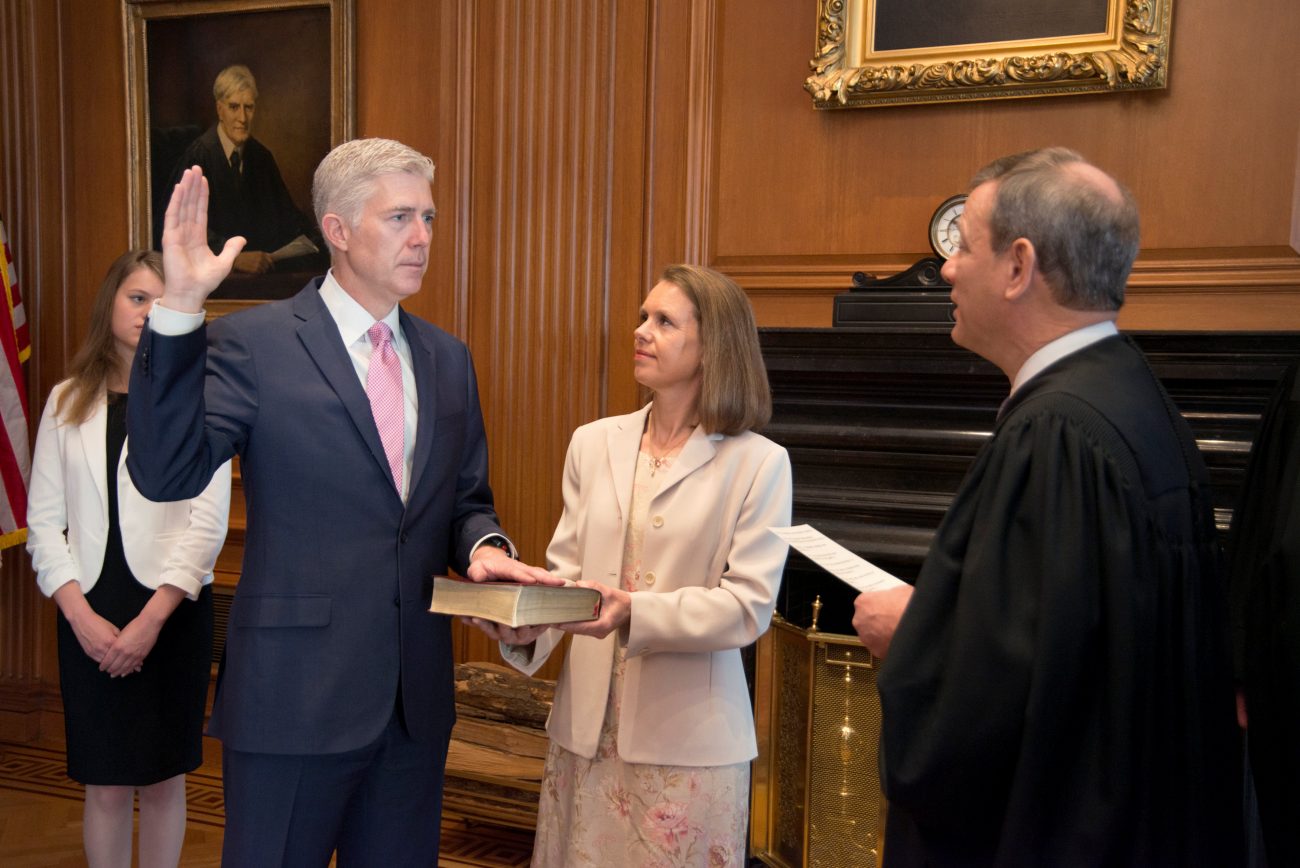 U.S. Chief Justice John Roberts, right, administers the constitutional oath to Judge Neil Gorsuch as his wife, Louise, holds the Bible during an April 10 private ceremony at the Supreme Court in Washington. It was the first of two oaths he was taking to be sworn in as the newest Supreme Court justice. (CNS photo/U.S. Supreme Court via Reuters)

WASHINGTON (CNS) — After he was sworn in for the U.S. Supreme Court in a public ceremony at the White House Rose Garden April 10, Justice Neil Gorsuch said he would be “a faithful servant of the Constitution” and of the laws “of this great nation.”

Justice Anthony M. Kennedy, for whom Gorsuch once clerked, administered the oath to the court’s 113th justice. At 49, the former federal appeals court judge from Colorado is the youngest justice to serve on the court in 25 years.

Earlier in the day, Chief Justice John Roberts administered the constitutional oath in a private ceremony inside the Justices’ Conference Room at the court.

President Donald Trump praised, saying Gorsuch “will go down in history as one of the truly great justices in the history of the U.S.” He said his now-confirmed nominee to the court will render his judgments “not on his personal preferences but based on a fair and objective reading of the law.”

In his remarks in the Rose Garden, Gorsuch said he felt humbled by being called to serve on the nation’s highest court and he told his former law clerks he was grateful for their service. “Your names are etched in my heart forever,” he remarked.

He was confirmed for the court April 7 in a 54-45 vote. The move came after lawmakers a day earlier had voted 52-48 along party lines to approve a rules change introduced by Senate Majority Leader Mitch McConnell, R-Kentucky, to cut off debate and allow confirmation of Trump’s nominee by a simple majority, rather than the 60 votes needed.

The three Democratic senators who joined the Senate’s 51 GOP members to vote for confirmation were Sens. Joe Donnelly of Indiana, Heidi Heitkamp of North Dakota and Joe Manchin of West Virginia.

“For decades, liberal senators and interest groups had attacked Republican judicial nominees with procedural and political weapons that Republicans were slow to match,” National Right to Life senior policy adviser Douglas D. Johnson said in a statement. “This week, the Republicans took decisive action to restore parity to the judicial confirmation process, and we commend them for it.”

Gorsuch has been a judge of the U.S. Court of Appeals for the 10th Circuit, based in Denver. Nominated by then-President George W. Bush, he was unanimously confirmed for the circuit court in 2006 and that same year, he received a “unanimously well qualified” rating from the American Bar Association.

Gorsuch has degrees from Columbia, Harvard and Oxford universities. He clerked for two Supreme Court justices and worked for the Department of Justice. He is an adjunct law professor at the University of Colorado and he wrote a 2009 book arguing against the legalization of assisted suicide and euthanasia.

NEXT: Bishops back bill to let agencies opt out of adoption for same-sex couples