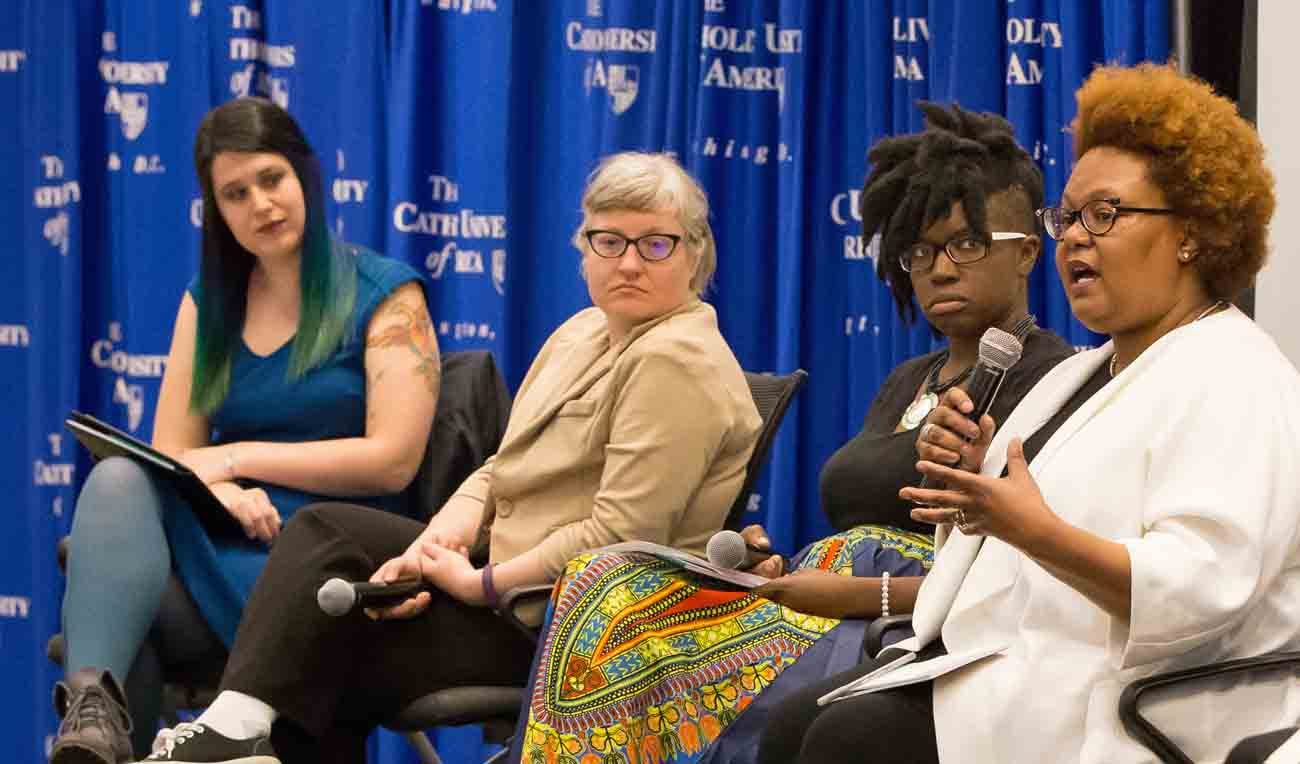 WASHINGTON (CNS) — Convened for a panel discussion on whether pro-life advocates can be feminists, three speakers from each side of the abortion issue debated the topic for an hour and ultimately agreed on one thing: the need for both sides to build more coalitions to improve conditions for women, including better overall access to health care.

The April 10 panel discussion on the campus of The Catholic University of America in Washington was sponsored by the university’s Institute for Human Ecology and moderated by Angela Knobel, associate professor of philosophy and an institute fellow. It drew a crowd of 125.

“I was a feminist before I was pro-life, and I’m honestly pro-life because I’m a feminist,” said panelist Aimee Murphy, founder and executive director of Rehumanize International in Pittsburgh. Her organization, formerly Life Matters Journal, is an education and advocacy group dedicated to promoting a consistent ethic of life from conception to natural death.

Like Murphy, the other two pro-life panelists, Cessilye Smith of Doulas for Life and Destiny Herndon-De La Rosa of New Wave Feminists, also strongly emphasized a consistent life ethic that opposes abortion and all threats to life.

Murphy explained that as a 16-year-old in California, she feared she was pregnant after her on-again, off-again boyfriend raped her. She considered having an abortion until he told her she’d have to have one, that he would drive her to a clinic and pay for it. If she didn’t do it, he said, he might kill her and then himself because he couldn’t tell his mom about the situation.

“I had been pro-choice, due in great part to the cultural environment I was steeped in,” she said, but “in that moment,” when the boyfriend threatened her, “everything changed.” “I decided that I couldn’t perpetuate the cycle of violence and oppression. I had to be better, I had to choose nonviolence” and reject abortion, recalled Murphy, who later learned she was not pregnant.

“When I adopted this philosophy of nonviolence, I was drawn more deeply into feminism,” said Murphy. “I realized that if all humans truly are equal, regardless of sex or race, then that equality must be inherent in us … (and) it must also apply to preborn human beings as well as to their mothers: both in our culture and in the law.”

Merritt is co-founder and co-director of Reproaction in Missouri, formed to increase access to abortion and “advance reproductive justice.”

“In Missouri, the pro-life movement has even pushed legislation that would require a woman get permission from a man to gain access to abortion,” she said in an apparent reference to state laws that require a 72-hour waiting period after an initial consultation with a physician about obtaining an abortion and parental consent for minors to get an abortion.

“Feminism is an action agenda to secure the social, economic and political equality of women,” said Merritt. “It is possible to support, find comfort, and feel empowered by parts of feminism without being feminist. It is not possible to support the pro-life movement and be a feminist.”

But “the debate over feminism is not a debate over whether we can work together,” Merritt added, noting that she volunteers with the Franciscan Sisters of Mary in helping pregnant women in need. She and the sisters will never agree about abortion, but together they can help women, she said.

Smith, of Doulas for Life, said she seeks to change the narrative about pro-lifers being only concerned with saving babies. In calling for “a consistent ethic of life,” she said “with that consistency comes a genuine interest in all of humanity.”

“When you see specific political parties seeking to cut government programs that many women facing unplanned pregnancies would need in order to keep and raise their children, it causes many to wonder just how ‘pro-life’ we really are,” Smith added. “It gives the impression that once again we’re all about the babies, but not the women.”

“There will always be variations of feminism, but when it’s all said and done, it’s about equality,” she said. “As pro-life feminists, we simply extend that equality to the fetus which is just at a different stage of human development.”

Society aims to normalize the “barbaric procedure” of abortion, Smith said. She also objected to how “we have made abortion … a pillar of feminism. Something is wrong here.”

Panelist Robin Marty, a writer and activist, said she thinks it is possible to be both pro-life and feminist. She uses both “pro-choice” and “pro-life” to describe herself. She supports a right to abortion, but is pro-life, she said when it comes to efforts to see that women can “access contraception easily … with no financial burden so there are less unintended pregnancies to begin with.” She also supports women who want to “get pregnant and parent ” without coercion “and regardless of age, economic standing, the number of children they already have, or their place in life.”

She said she is “willing to work with anyone” on such issues as ending welfare caps, creating high school day care programs and expanding parental housing on campuses.

Megan Klein Hattori, an assistant professor of sociology at the University of Massachusetts in Boston, said she was not sure pro-lifers can be feminists. “We talk about feminism, but most of us know that ‘feminisms’ is more appropriate. Feminists have always come from amazingly different standpoints.”

She also urged coalition-building to help provide comprehensive sex education to all children, get women and girls access to long-acting contraception, and get “the pill out of the hands of doctors and into the hands of women.”

“Labels are killing us, labels are dividing us, labels are polarizing us,” said Herndon-De La Rosa. Her mother as a teen became pregnant with her, she said, and chose “to give me the precious gift” of life. But her mom also had the support of family, noted Herndon-De La Rosa. She repeated the same pattern as her mom and faced pregnancy herself as a teen, but she chose life because she, too, had family support.

She’d like to see more efforts to ensure all pregnant women have resources they need so they don’t have to feel abortion is their only option. “There are so many places where we can work together,” Herndon-De La Rosa added. “It’s not pro-choice when we feel we don’t have a choice. … That a woman ever has to choose violence for her child is awful.”