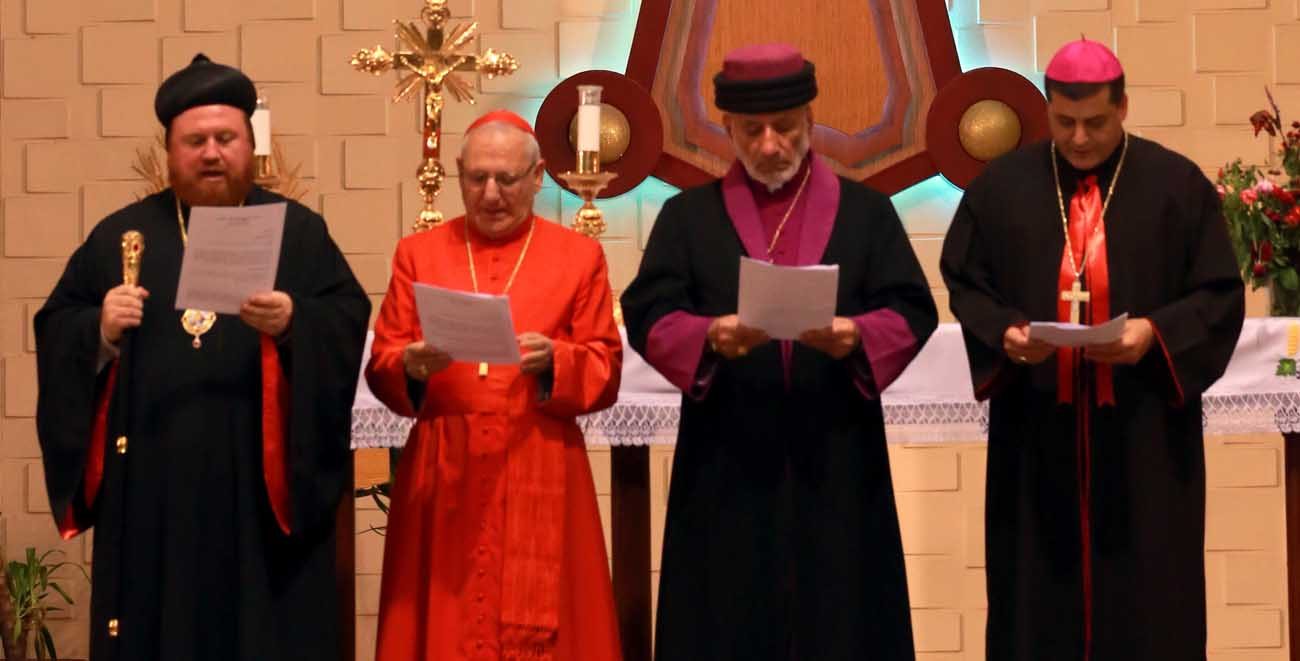 Chaldean Catholic Patriarch Louis Sako of Baghdad, Iraq, in red, leads a 2016 prayer service with other religious leaders at the Church of our Lady of Perpetual Help in in Ainkawa, Iraq. The patriarch is supporting a more than 80-mile peace march during Holy Week. (CNS photo/Amel Pain, EPA)

IRBIL, Iraq (CNS) — The Chaldean Catholic patriarch is supporting a more than 80-mile peace march during Holy Week to urge an end to violence in his homeland and throughout the Middle East.

The Chaldean Catholic Church has dedicated 2017 as the Year of Peace. For the patriarch, Holy Week culminating in the Easter celebration offers a fresh hope to breathe new life into prayer and reflection, reconciliation and dialogue.

“Peace must be achieved by us (religious leaders) as well as politicians, through courageous initiatives and responsible decisions,” said Patriarch Louis Sako of Baghdad.

He has repeatedly called on Iraqis to engage in “serious dialogue, openness and honesty” to realize national reconciliation and unity among the country’s vast mosaic of religious and ethnic peoples, battered by years of sectarian violence.

“Some 100 people, Iraqis and foreigners, are expected to participate in the march, which will begin on Palm Sunday (April 9) with a Mass in Irbil,” the patriarch told Catholic News Service by phone.

“They will walk from Irbil to Alqosh in the Ninevah Plain, needing one week or more because the journey is very long, some (140 kilometers) 87 miles,” he said. “I will join them in a village near Alqosh on Holy Thursday,” April 13.

The march presents a “great occasion for unity,” and a common front against the violence and bloodshed that have scarred Iraq and the region, he said.

“Another group from Lyon, France, will help make the Way of the Cross using as the stations villages from Telaskov to Bakova, a walk of two to three hours,” Patriarch Sako told CNS.

This peace initiative is meant to demonstrate the bond among Iraqi communities and churches around the world during the years of suffering and persecution. These once-flourishing Christian towns have formed the bedrock of centuries of Christian history and were recently liberated from the brutal control of the so-called Islamic State militants.

Telaskov translates as “Bishop’s Hill” and, before the Islamic State takeover, was a thriving, modern town of 11,000. But when ISIS attacked in 2014, Christians fled. Although it is currently a ghost town, there are hopes that it will revive when mines and booby traps left by the militants are removed and its infrastructure rebuilt.

Last September, representatives of the Chaldean Catholic Archdiocese of Irbil told the U.S. Congress that they had received no U.N. or U.S. government-administered humanitarian aid for 70,000 Christian or Yezidi survivors of what has been now designated as a genocide against them and other Iraqi minorities, carried out by the Islamic State since 2014.

“At the moment, we are going through the tunnel, and we need to work hard and pray without ceasing for peace in our country and the region and for the safe return of the forcibly displaced people to their homes and properties,” Patriarch Sako said in a recent Lenten address.

He urged the faithful “to rely on wisdom and patience and to stay united together on the land where we were born (and have) lived for 1,400 years together with Muslims, sharing one civilization.”

Ahead of Easter, Patriarch Sako said he hopes for “a real resurrection, a quick return of displaced to their homes, and a restoration of peace at our churches, country and the whole world.”

PREVIOUS: Pope to seminarians: Using church for personal ambition is a ‘plague’

NEXT: Corruption stifles the fresh air of mercy, pope says