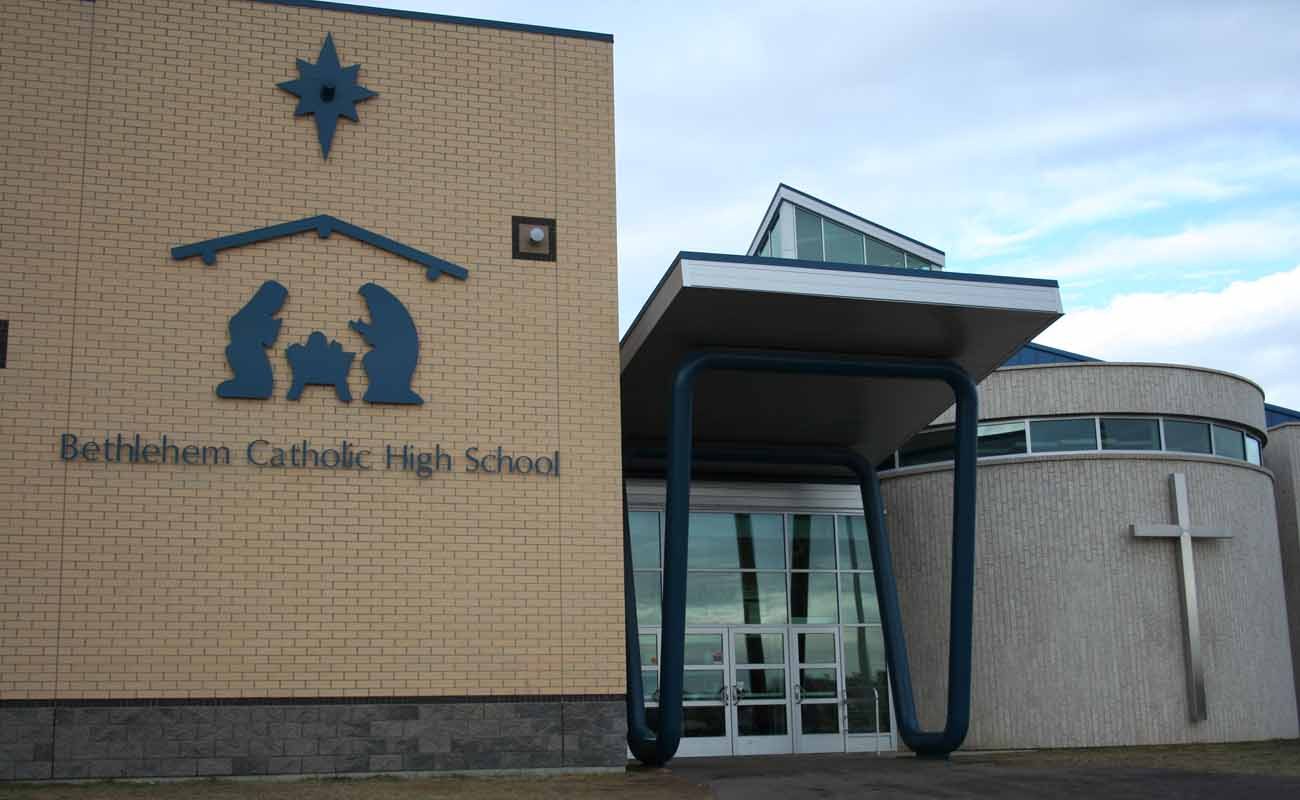 The exterior of Bethlehem Catholic High School is seen in an undated photo in Saskatoon, Saskatchewan. Queen's Bench Justice Donald Layh ruled April 21 that the government of Saskatchewan is violating a section of the Charter of Rights and Freedoms by funding non-Catholic students who attend Catholic schools. (CNS photo/courtesy Greater Saskatoon Catholic Schools)

Queen’s Bench Justice Donald Layh ruled April 21 that the government of Saskatchewan is violating a section of the Charter of Rights and Freedoms by funding non-Catholic students who attend Catholic schools.

Recognizing his ruling will have repercussions, Layh gave the province until June 30, 2018, to end the practice.

The Saskatchewan Catholic School Boards Association said it was “obviously disappointed” with the decision and would consider an appeal.

“We’ll take some time to go over the 230-page decision, consult with our lawyers and process what this means for the division, for Catholic education in Saskatchewan, and for all of the families who choose Catholic education,” said an association statement.

“This has already been a 12-year journey, instigated by the public boards, and we don’t have much of an appetite to spend more on legal defense. However, we have an obligation to stand up for the constitutional rights of separate school divisions, so we are giving serious consideration to an appeal. In the event of an appeal, a final decision would be a long way down the road.”

Archbishop Bolen offered his “full support” to the school board members “as they continue to defend the constitutional rights of separate school divisions in the province.”

In his decision, Layh wrote that the Constitution Act of 1867 does not require the province to fund non-Catholic students who attend Catholic schools. The constitution, he said, only protects the rights of Catholic schools “to the extent they admit students of the minority faith.”

When the state funds non-Catholics in Catholic schools, it violates the Charter of Rights by failing to uphold its duty of religious neutrality and by failing to apply equality rights, the judge wrote.

The court case was initiated in 2005 when Good Spirit Public School Board launched an action against Christ the Teacher Catholic Schools board.

Due to declining enrollments, the Good Spirit public board closed its school in the rural community of Theodore, about 125 miles northeast of Regina. The Catholics in the area, which included families in the school, then successfully petitioned the government to form a new Catholic school division in the town. That new body purchased Theodore public school and renamed it St. Theodore.

When the Catholic school opened, it accepted local non-Catholic students whose parents objected to busing their children to a public school in another town. More than 60 percent of St. Theodore students are non-Catholic.

The public school board then launched a lawsuit against Christ the Teacher Catholic Schools and the government of Saskatchewan. The trial ended last summer.

The case has cost the public and Catholic school divisions and the government of Saskatchewan several million dollars.

Beyond the financial implications, the decision “threatens the choice of parents, limiting the education options of non-Catholic parents for their children,” said the Saskatchewan Catholic School Boards Association website.

Flegel is a contributor to Prairie Messenger, based in Muenster, Saskatchewan.