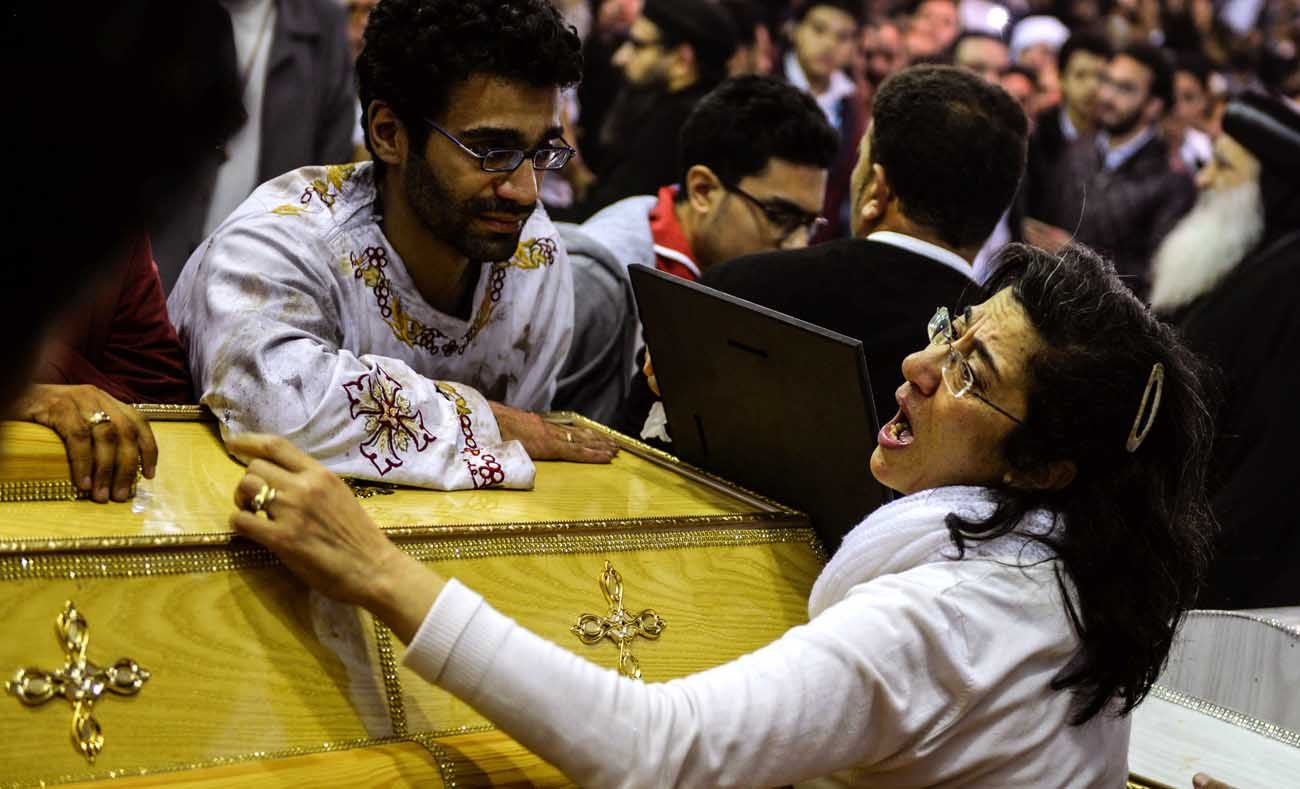 Mourners attend the April 10 funeral for victims of a bomb attack the previous day at the Orthodox Church of St. George in Tanta, Egypt. That same day, April 9, an explosion went off outside the Cathedral of St. Mark in Alexandria, where Coptic Orthodox Pope Tawadros II was presiding over the Palm Sunday service. (CNS photo/Mohamed Hossam, EPA)

“The pope’s trip to Egypt proceeds as scheduled,” Greg Burke, Vatican spokesman, told Catholic News Service by email April 10. The pope is scheduled to meet governmental and interfaith leaders during an April 28-29 visit to Cairo.

“Egyptians are looking forward to Pope Francis’ visit, although the atmosphere at present is heavy,” Father Rafic Grieche, spokesman for the Egyptian bishops, told CNS April 10, the day after the attacks.

“The pope’s mission is to be beside his brothers at the time of difficulty. Now is the real time that he can bring peace and hope to the Egyptian people as a whole and to the Christians of the East, in particular,” Father Grieche added.

He said people were uneasy entering churches with metal detectors and other security measures.

“It’s not like going to a normal church. But we need these measures to keep people safe,” he said.

He said after the attack, he celebrated a Mass with 2,000 people.

“The people knew already about the attack in Tanta, but they did not want to be afraid. In the evening, they also came for the prayers of the Holy Week,” Father Grieche said.

Coptic Orthodox Pope Tawadros II was in the Cathedral of St. Mark in Alexandria April 9 for the Palm Sunday service, when an explosion went off outside the church. Security footage appeared to show a security officer direct a man who was seeking entry into the cathedral to go through a metal detector. The man took a step under the detector then backed up a step, followed by a huge explosion that cut off the camera feed.

Earlier, a bomb exploded 70 miles away inside the Church of St. George in Tanta, 50 miles north of Cairo, during its Palm Sunday service. Estimates say at least 44 people were killed and more than 100 injured in the two attacks, making it one of the deadliest against the nation’s Christians in decades.

It was the single deadliest day for Christians in decades and the worst since a bombing at a Cairo church in December killed 30 people.

Pope Tawadros told the Italian national network Rai News April 9 the attacks would “not damage the unity and cohesiveness” of the Egyptian people.

“Egyptians are united before this terrorism,” he said, adding that “these vile attacks that hit people of peace in places of prayer demonstrate that terrorism lacks any religion.”

Retired Coptic Catholic Bishop Antonios Mina of Giza, Egypt, said the incidents were an attack against the nation’s unity, its Coptic Christians, “to remind them that they have no rights, and against all Christian minorities of the country that anxiously await Pope Francis.”

“Despite it all, we will never lose hope. These atrocious gestures make us firmer in the faith and stronger,” he said. “Egypt’s Christians are warriors of hope.”

One Catholic leader highlighted his country’s failure to address the real causes behind the Palm Sunday massacres.

Speaking to “the officials and the wise of this country,” Coptic Catholic Bishop Botros Fahim Awad Hanna of Minya said that “you don’t fight terrorism with words or slogans, nor with security or armies alone.”

In a posting on his Facebook page, Bishop Fahim said that when Pope Francis goes to Cairo, he “will come to say no to terrorism and evil, and yes to goodness and fraternity. Love will never fail.”

Cardinal Daniel N. DiNardo, president of the U.S. Conference of Catholic Bishops, said the attacks on the churches were “unspeakable persecution.”

“In the midst of what should be peace, horrible violence yet again,” he said. On behalf of all U.S. bishops, the cardinal expressed “our deepest sadness” for all those killed and injured, and their loved ones.

“I also express our solidarity with the Coptic church in Egypt, an ancient Christian community that faces mounting persecution in its historic home from violent extremism. I also pray for the nation of Egypt, that it may seek justice, find healing, and strengthen protection for Coptic Christians and other religious minorities who wish only to live in peace.”

Cardinal DiNardo also pledged the U.S bishops’ solidarity with the Coptic church in an April 10 letter to Pope Tawadros. He echoed Pope Francis’ call for an end to violence and said he joined with the pontiff “in praying for all those who suffer and who have perished, that the Lord will bring healing to victims and their families and consolation as we approach Easter and its promise of the Resurrection.”

Egypt is 90 percent Sunni Muslim; Christians make up the remaining 10 percent, with that majority being the Coptic Orthodox church. The Catholic community in Egypt numbers about 272,000, less than 0.5 percent of the population.