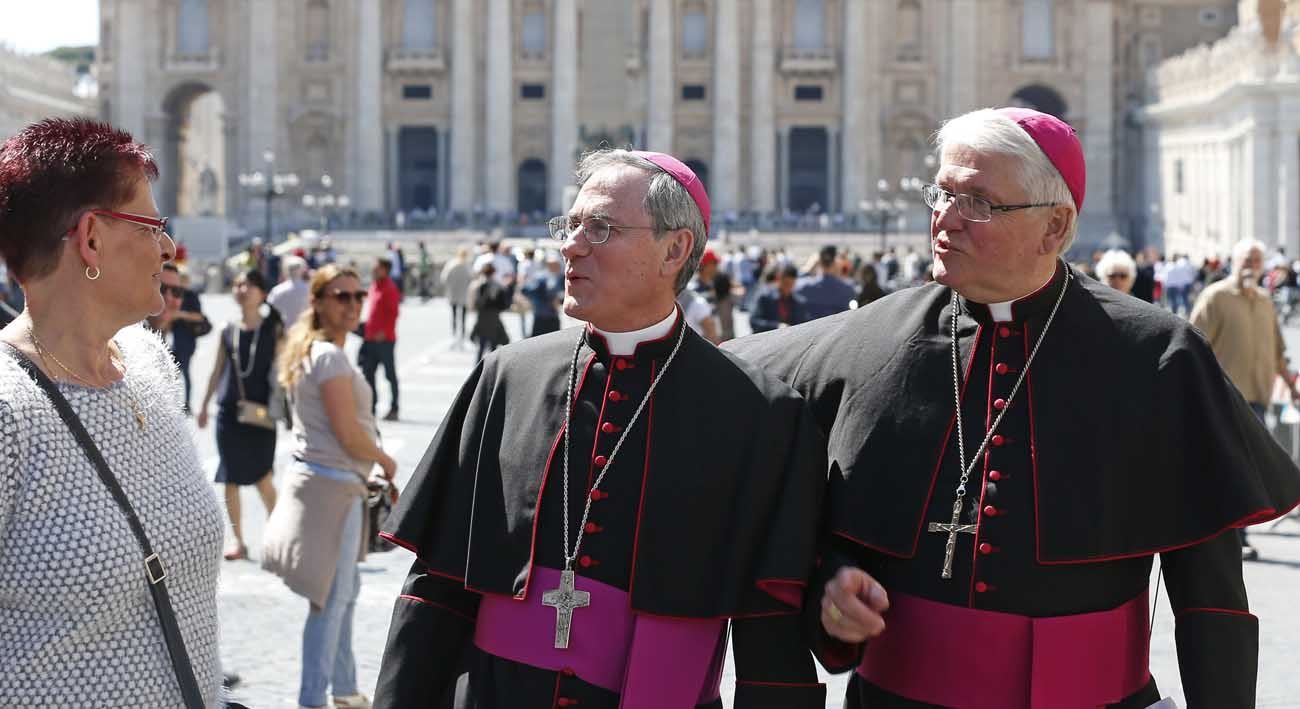 Bishops Ronald P. Fabbro of London, Ontario, and Douglas Crosby of Hamilton, Ontario, chat with a tourist after posing for a photo in front of St. Peter's Basilica during their "ad limina" visits to the Vatican April 25. (CNS photo/Paul Haring)

VATICAN CITY (CNS) — Like the two groups of Canadian bishops that preceded them, the bishops of Ontario said their meeting with Pope Francis was time spent with a brother bishop with similar joys and challenges in his pastoral work.

The 21 Ontario bishops making their “ad limina” visits to the Vatican spent almost two hours talking with Pope Francis April 25. The visits “ad limina apostolorum” — to the threshold of the apostles — are a combination of a pilgrimage to the tombs of Sts. Peter and Paul and meetings with the main Vatican offices to exchange information, insights and ideas.

The meeting with Pope Francis was an informal exchange of concerns and signs of hope — and at least one joke told by Pope Francis that Bishop Ronald Fabbro of London and Bishop Douglas Crosby of Hamilton declined to share with Catholic News Service. But it was funny, they said.

The serious matters discussed during the meeting ranged from Canadian Catholic Church relations with the country’s indigenous communities to immigration and from the persecution of Christians around the world to the introduction of medically assisted suicide in Canada.

Bishop Crosby, who is president of the Canadian Conference of Catholic Bishops, said the Ontario group spoke particularly about members’ concerns that proposed Ontario laws and policies surrounding euthanasia currently offer no real guarantees of the freedom of doctors and nurses to conscientiously object to actively helping a person die. The proposals also do not offer conscience guarantees to Catholic hospitals and health care providers.

Pope Francis, the bishop said, “agreed with our concern” and encouraged the bishops in their fight for conscience rights.

“It is a pressing issue for us,” added Bishop Fabbro, president of the Assembly of Catholic Bishops of Ontario.

In a separate interview with CNS, Cardinal Thomas Collins of Toronto also described the conscience provisions surrounding legalized euthanasia as “the most urgent issue we are dealing with.”

The Canadian Supreme Court ruled unanimously in 2015 that people who are “grievously and irremediably ill” have a right to medical assistance in dying. Canadian provinces then had to draft laws to implement the decision.

Because the court decision was unanimous, the cardinal said, it will not be easy to overturn. In the meantime, the bishops of Ontario are working hard to get conscience protections into provincial norms, educating the faithful and providing material and moral support to Catholic health care providers to improve access to palliative care so that the seriously ill are not subject to constant unbearable pain.

The cardinal characterized the visits with the various Vatican offices as “very free-flowing conversations” on almost every imaginable topic of concern to both the local and universal church. “It’s not like, ‘What is the No. 1 burning issue?'”

Speaking just an hour after leaving Pope Francis, Cardinal Collins said, “He’s a wonderful man, a very loving, pastoral person. What you see is what you get. He’s very kind and very prayerful. It’s always a high point of the ‘ad limina’ to meet the pope.”

The “ad limina” visit, Bishop Fabbro said, is built around the pilgrimage to the tombs of the apostles, “praying to the apostles to intercede for us as bishops in our ministry as their successors.” Making that prayer in Rome emphasizes that connection in a unique way.

In some ways, Bishop Crosby said, the “ad limina” does for a bishop “what the bishop does for the diocese in trying to make the parishes aware that they are not independent units, that we belong to a bigger group of people, the community is much larger.” Meeting with the pope and Roman Curia officials highlights that the church “is very big indeed.”

Asked what he was taking away from his meeting with the pope, Bishop Crosby immediately said, “rosaries” and pointed to a large envelope of rosaries blessed by Pope Francis.

Bishop Fabbro said his takeaway was “an encouragement to keep prayer and the proclamation of the Gospel the heart of my ministry.”

Pope Francis spoke “of the importance of evangelization and how nowadays you aren’t preaching to force people into the church, but you want to attract them to the message,” Bishop Crosby said. “As I was listening to him I thought he has a very attractive personality. He is not loud. He is calm-thinking. The way he explains things is simple. You have a sense that he has a good understanding of humanity. And he’s a light. He’s a light to us.”

NEXT: After Easter, Chileans on horseback take sacraments to homebound