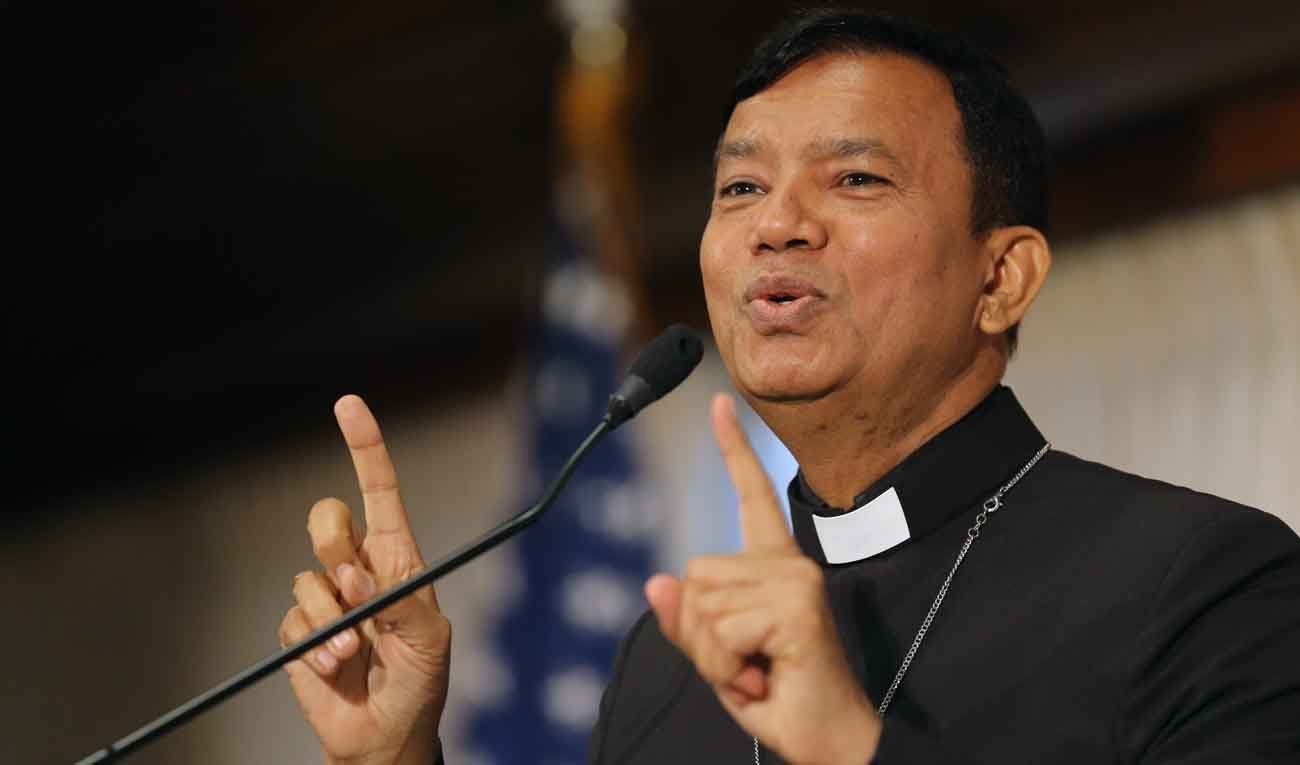 Archbishop Sebastian Shaw of Lahore, Pakistan, speaks during an April 20 forum at the National Press Club in Washington. Speakers at the forum released the findings of a study on responses to Christian persecution. (CNS photo/Bob Roller)

WASHINGTON (CNS) — Children attending Catholic schools in Pakistan must walk through a gate with two armed guards and into a compound surrounded by 8-foot walls.

The Pakistani government provided security for all churches in Pakistan on Easter, he said. But after a series of attacks on churches in the past several years, the government also gave churches an ultimatum to provide their own security, he said.

Most churches and schools already had 4- or 5-foot walls around them, he said, but the government said the “walls must be 8 feet high, plus razor wires — not barbed wires — on top.” The buildings had to have closed-circuit TV cameras and armed security guards, he said.

“It’s a big, big financial burden,” the archbishop said. He told CNS the church turned to international aid agencies, including Aid to the Church in Need and German Catholic agencies, for funding for the project, which is almost complete.

The archbishop visited the United States as a guest of Aid to the Church in Need to address a Washington symposium on religious persecution. He spoke to CNS April 21 about security and the challenges of helping young people in Pakistan, where Christians are only about 2 percent of the population.

Archbishop Shaw told CNS the government threatened to close schools that did not comply with the new security standards. Many of the nation’s Catholic schools are in poor rural areas, he said, and some children cannot afford the school fees.

“If the schools will be closed, where will these children go?” he asked. “These children will have no education, and they will become … engaged in street crimes. … Unemployment will grow ….”

Despite the increased security, Catholic schools in Pakistan remain on high alert for security, he said. Entering school between two gunmen often means, “psychologically, the children feel we are not safe.”

After Masses, church officials often urge people to immediately leave the compound. “Try to go home. Do not cluster” or stand around and talk, he said they tell parishioners.

However, despite the concerns, Archbishop Shaw said he always tells people: “Do not be afraid to live in Pakistan … because God has some plan for you. Try to find the purpose of your being — in Pakistan.”

Archbishop Shaw, who serves as chairman of the National Youth Commission for the church, said church leaders try to build up the youth and keep them connected to the faith.

For instance, he said, some young people are very good in school, but others might be good at computers or football. This “promotes self-respect and recognition of your own gift.”

“God has given you a special gift,” he said church leaders tell young people. “How do you see the work of God in your life?”

In May, Lahore archdiocesan officials will have career guidance fairs in various spots around the diocese.

“The majority of Christians are very poor — hand-to-mouth,” he said. In giving guidance, he said, church officials try to steer people toward careers in which there are jobs.

“Because sometimes people choose subjects and afterward there are no jobs,” he said.

The archbishop credits Catholic schools and the church’s Sunday catechism school with the faith formation of the country’s young Catholics.

He recalled that suicide bombers attacked two churches March 15, 2015. On the following Sunday, Palm Sunday, the archbishop went to a parish to help them celebrate so they would not be afraid.

Among the 2,000-3,000 people who turned out was a young woman carrying a small child. He asked her if she was not afraid to bring her child.

“Very innocently she told me, she said, ‘Bishop, the child is a gift from God. … It is my responsibility to bring this child to the church and show him the house of God the father.'”

She said the child must know “when all relationships are finished, the ultimate relationship will remain,” Archbishop Shaw said. “She strengthened my faith.”

He also said a 21-year-old who threw himself on one of the bombers outside a church in the 2015 attack had attended catechism school, was an altar boy and had attended Bible study.

“He had a chance to run away,” as the bombers approached, the archbishop said, noting there were 1,400-1,500 people praying in the church.

“This is all the result of our catechism,” he added. “These young people, well-catechized, they know the purpose of their living, they have a faithfulness to the church. He gave his life and saved the lives of people who were praying inside.”

Such education is important, he added. Young people “should not be shy to profess or share their faith,” and they must be prepared to talk to others about faith.

When people share what they believe and listen to what others believe, “then people start appreciating your values or the Gospel virtues that you live.”

NEXT: Knights of Malta asked to elect temporary leader