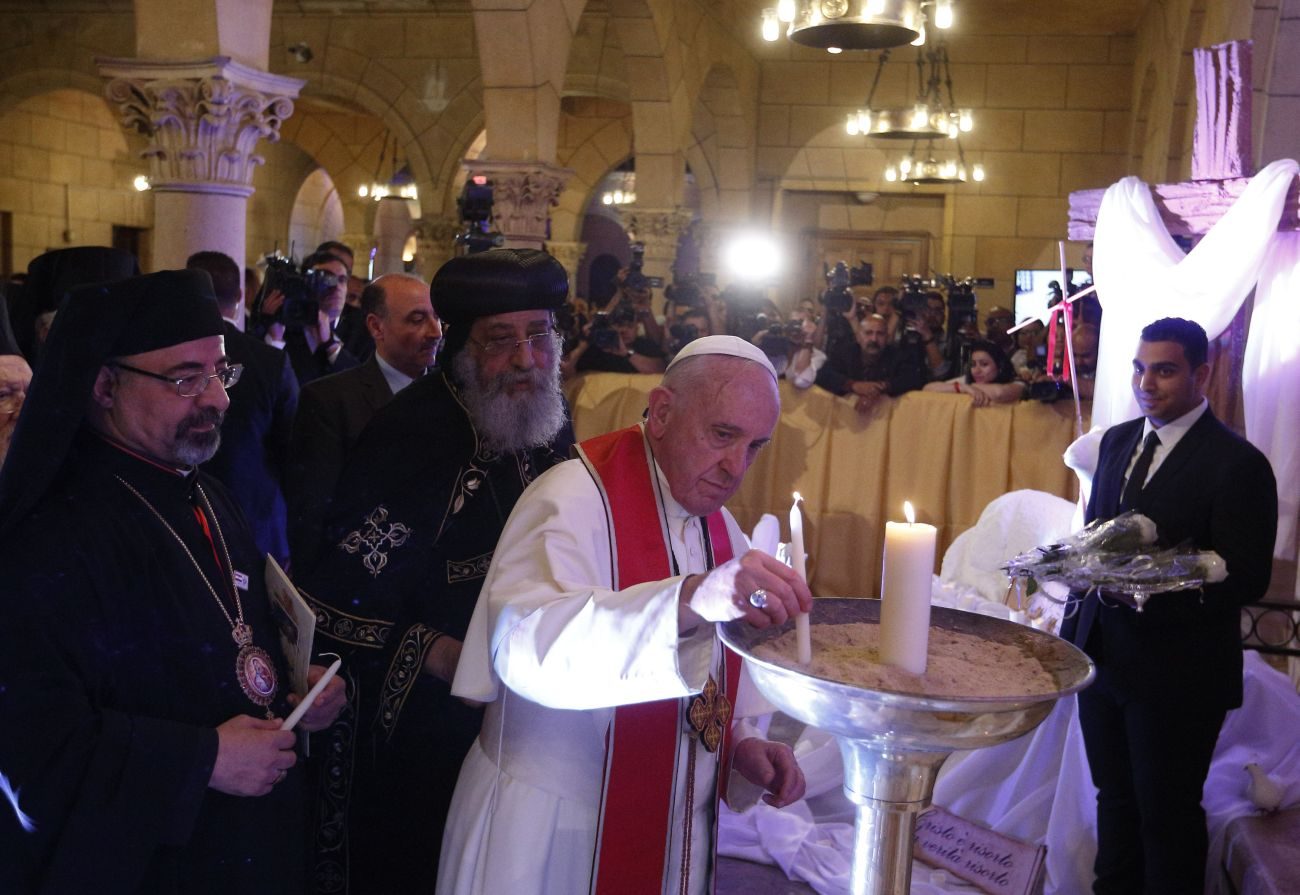 Pope Francis, accompanied by Coptic Orthodox Pope Tawadros II, lights a candle outside St. Peter's Church in Cairo April 28. The pope lit the candle in remembrance of victims of a December 2016 bombing inside the church. (CNS photo/Paul Haring)

CAIRO (CNS) — Placing flowers, lighting a candle and praying at the site where dozens of Coptic Orthodox Christians were killed by an Islamic State militant last year, Pope Francis and Coptic Orthodox Pope Tawadros II paid homage to those who were killed for their faith.

Pope Francis and Pope Tawadros walked in a short procession to the Church of St. Peter, where 29 people died and 31 were wounded Dec. 11. The faithful chanted a song of martyrs, and some clashed cymbals under the darkened evening sky.

Inside the small church, the leaders of several other Christian communities in Egypt as well as Ecumenical Patriarch Bartholomew of Constantinople sat before the congregation, which included family members of the victims.

A portion of one wall of the complex was splattered with blood, and pictures of those killed — many with bright smiles to the camera — were hung above. Some of the church’s stone columns were pock-marked from the debris or shrapnel sent flying from the explosion.

Each of the eight Christian leaders seated before the congregation, beginning with Pope Francis, read a verse from the beatitudes in the Gospel of St. Matthew. Pope Francis and Pope Tawadros then each said a few words in prayer, and everyone shared a sign of peace.

Led by Pope Francis, the eight leaders went to the back of the church, where each lit a small candle and placed white flowers beneath the photos of the martyrs. Pope Francis leaned low to touch the blood-stained wall and made the sign of the cross.

Earlier, in a historic and significant move toward greater Christian unity, Pope Tawadros and Pope Francis signed an agreement to end a longtime disagreement between the two churches over the sacrament of baptism.

The Coptic Orthodox Church had required new members joining from most non-Coptic churches — including those who had previously been baptized as Catholic — to be baptized again.

The Catholic Church recognizes all Christian baptisms performed with water and in “the name of the Father, Son and Holy Spirit.” Orthodox who enter the Catholic Church are received as full members, but not baptized again.

In the joint declaration, the two leaders “mutually declare that we, with one mind and heart, will seek sincerely not to repeat the baptism that has been administered in either of our churches for any person who wishes to join the other.”

The document was signed during a courtesy visit with Pope Tawadros at the Coptic Orthodox Cathedral April 28.

In his speech to Pope Tawadros and other Coptic Orthodox leaders, Pope Francis said, “The innocent blood of defenseless Christians was cruelly shed.” He told them it was that innocent blood “that united us.”

“How many martyrs in this land, from the first centuries of Christianity, have lived their faith heroically to the end, shedding their blood rather than denying the Lord and yielding to the enticements of evil or merely to the temptation of repaying evil with evil?”

“How many martyrs in this land, from the first centuries of Christianity, have lived their faith heroically to the end, shedding their blood rather than denying the Lord and yielding to the enticements of evil or merely to the temptation of repaying evil with evil,” he said.

He encouraged Catholic and Orthodox to work hard to “oppose violence by preaching and sowing goodness, fostering concord and preserving unity, praying that all these sacrifices may open the way to a future of full communion between us and peace for all.”

Pope Tawadros, in his speech, said Pope Francis was following in the footsteps of his namesake, St. Francis of Assisi, who came to Egypt nearly 1,000 years ago to meet Sultan al-Kamel and engage in “one of the most important experiences of intercultural dialogue in history — a dialogue that is renewed today with your visit.”

Calling Pope Francis one of the symbols of peace “in a world tormented by conflicts and wars,” the Orthodox leader underlined that the world was thirsting for sincere efforts of spreading peace and love, and stopping violence and extremism.

Pope Tawadros said Pope Francis’ visit “is a message for the rest of the world,” showing Egypt as a model of mutual respect and understanding.

Despite Christianity’s deep roots in Egypt, which was evangelized by St. Mark, Christians have lived through some difficult and turbulent periods, he said. But that only made people’s desire to love even greater, showing that “love and tolerance are stronger than hatred and revenge and that the light of hope is stronger than the darkness of desperation.”

“The criminal minds” behind all the violence and threats hurting Egypt will never be able to break or weaken the hearts of its citizens who are united and showing an example for future generations.

Later in the evening, Pope Francis was scheduled to go to the apostolic nunciature, where he was staying, and greet a group of children who attend a Comboni-run school in Cairo. After dinner, he was expected to greet some 300 young people who came from outside Cairo to see him.

The majority of the 82.5 million Egyptians are Sunni Muslims. Most estimates say 10-15 percent of the Egyptian population are Christians, most of them Coptic Orthodox, but there are Catholics, Protestants and other various Christian communities in the country as well.

NEXT: Text of common declaration on baptism, by Pope Francis, Pope Tawadros