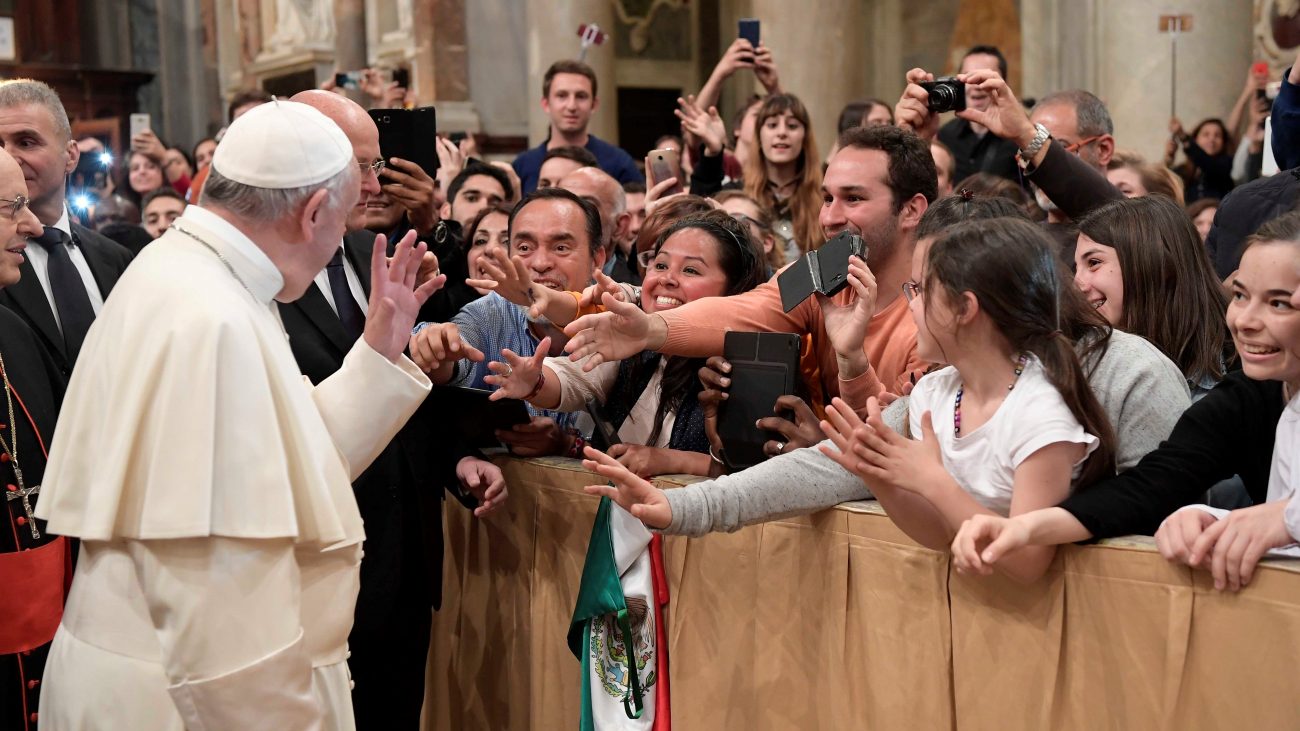 ROME (CNS) — On the eve of Palm Sunday, Pope Francis gave young people several missions: to ask their grandparents what their dreams were; to work to make those dreams reality; and to let their bishops and the pope himself know what they need from the church.

Officially launching the youths’ preparation for the 2018 Synod of Bishops and for World Youth Day 2019 in Panama, Pope Francis gathered with youths and young adults for an evening prayer vigil April 8 at Rome’s Basilica of St. Mary Major.

The 80-year-old pope surprised some people with two references to his own age, first pointing out that while they are preparing for the future, “at my age we are preparing to go.” The young people present objected loudly. “No?” the pope responded, “Who can guarantee life? No one.”

Later, returning to his appeal that they speak to their grandparents, the pope said, “I don’t know if it will be me, but the pope will be in Panama and he will ask you, ‘Did you speak with your elders?'”

Pope Francis arrived at the basilica with a prepared text, but as a Franciscan sister and a young man who survived a terrible accident shared their stories, the pope took notes, eventually setting aside the text.

The theme of the world Synod of Bishops, which will meet in October 2018, is: “Young people, faith and vocational discernment.”

“But let’s just call it, ‘the synod of young people,'” the pope said. It should be “a synod from which no young person feels excluded.”

The church could hold a synod involving Catholic youths active in parish life or Catholic organizations and lay movements. But Pope Francis said that is not what the church or young people need.

Young people must harness their energy and ideals and set out, “one alongside another, but looking to the future,” he said. “The world today needs young people who go in haste,” like Mary went to her pregnant cousin Elizabeth.

Franciscan Sister Marialisa, 30, who shared her vocation story, is an example, the pope said. Not every path she took was the right one, but eventually she discovered God’s purpose for her life and the way she was called to serve others.

The Italian nun told the young people she decided church wasn’t for her after she was confirmed at the age of 13. A couple of years later, a friend asked her to join a project the parish youth group was doing, “and I accepted only because there were a bunch of boys who went, too.”

Sister Marialisa said her involvement grew and she discovered a group of people who didn’t care what she looked like or what she wore, but cared about her. They helped her discover Jesus and his love.

Convinced she wanted to be an actress, she went to school in Rome, but she still had a nagging feeling something was missing from her life. She met the Franciscans and decided she needed to find out if being a consecrated woman was the way she was to live “the vocation to love.” Now she works with children in an area of southern Italy where the Mafia is strong. She said she tries to help them discover they are loved and have a right “to dream and dream big.”

Pope Francis said too often the world treats young people as “disposable” by not providing an adequate education or job opportunities. And, he said, “many young people must flee, immigrate to other lands. It’s harsh to say, but often young people are disposable material and we cannot tolerate this.”

Life will be challenging and involve taking risks, the pope told the young people, but they must have the courage to change the world and to start over when they fail.

“And try to find the beauty in little things,” the pope said, pointing as an example to Pompeo Barbieri, who also shared his story with the young people.

The 23-year-old Barbieri recounted how, at the age of 8, firefighters pulled him from the rubble of his school in San Giuliano di Puglia after an earthquake in 2002. His teacher and all 27 of his classmates died when the school collapsed.

Injured and needing a wheelchair, Barbieri’s parents were told swimming would help and now he’s a top Paralympian, he said. “That suffering, this wheelchair, have taught me the beauty of little things and remind me each day of how fortunate I am.”

“I wouldn’t change almost anything about my life or that tragedy except I wish my friends were still here. Just that,” he said.

PREVIOUS: Pope: Scientists must defend creation from distorted use of biotech

NEXT: Franciscan superiors ask pope to allow brothers to be elected leaders