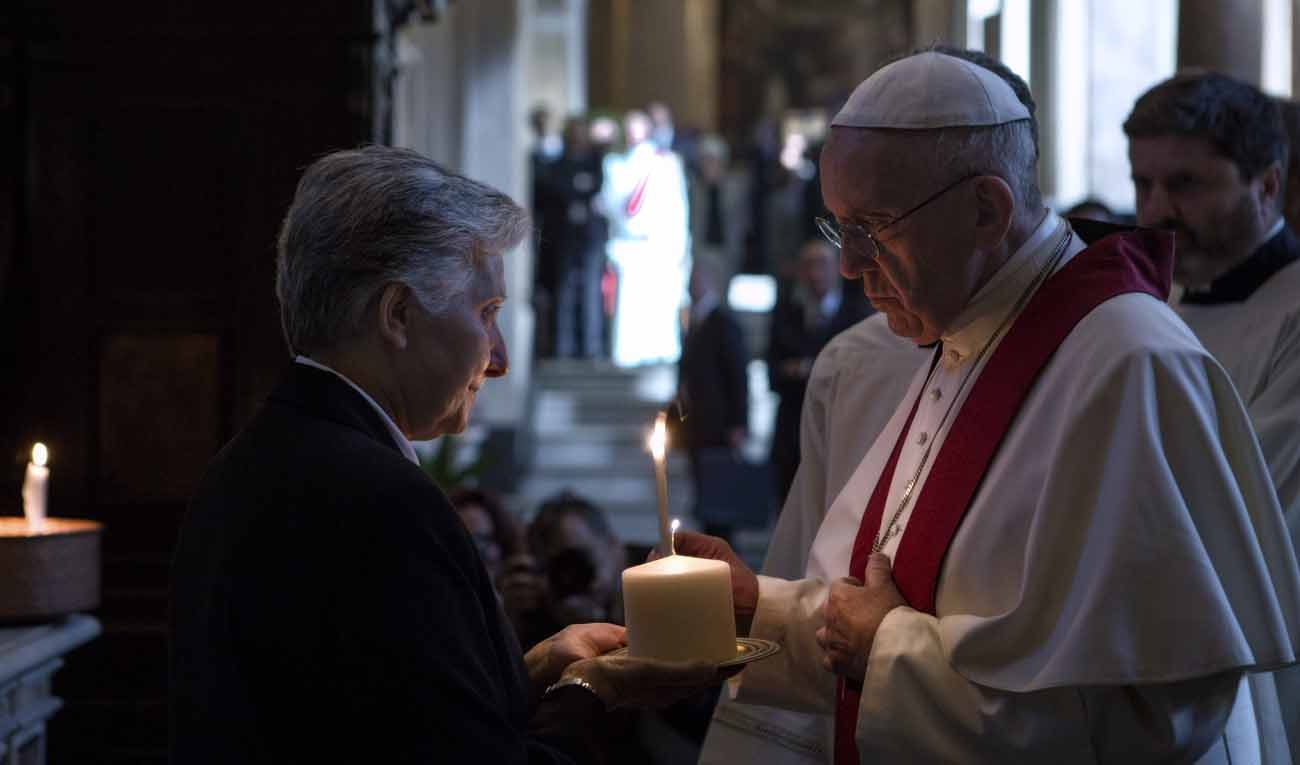 Pope Francis lights a candle during a prayer service at the Basilica of St. Bartholomew in Rome April 22. The service was in memory of Christians killed for their faith in the 20th and 21st centuries. (CNS photo/Maria Grazia Picciarella, pool)

ROME (CNS) — The Christian church today needs believers who witness each day to the power of God’s love, but it also needs the heroic witness of those who stand up to hatred even when it means giving up their lives, Pope Francis said.

“These teach us that with the force of love and with meekness one can fight arrogance, violence and war, and that with patience peace is possible,” the pope said in his homily in the small basilica on Rome’s Tiber Island.

Departing from his prepared text, Pope Francis said he wanted to add to the martyrs remembered at St. Bartholomew by including “a woman — I don’t know her name — but she watches from heaven.”

The pope said he’d met the woman’s husband, a Muslim, in Lesbos, Greece, when he visited a refugee camp there in 2016. The man told the pope that one day, terrorists came to their home. They saw his wife’s crucifix and ordered her to throw it on the ground. She refused and they slit her throat.

“I don’t know if that man is still at Lesbos or if he has been able to leave that ‘concentration camp,'” the pope said, explaining that despite the good will of local communities many refugee camps are overcrowded and are little more than prisons “because it seems international agreements are more important than human rights.”

But, getting back to the story of the Muslim man who watched his wife be murdered, the pope said, “Now it’s that man, a Muslim, who carries this cross of pain.”

“What does the church need today?” the pope asked. “Martyrs and witnesses, those everyday saints, those saints of an ordinary life lived with coherence. But it also needs those who have the courage to accept the grace of being witnesses to the end, to the point of death. All of those are the living blood of the church,” those who “witness that Jesus is risen, that Jesus lives.”

Under a large icon depicting modern martyrs of the gulag and concentration camp, Pope Francis prayed: “O Lord, make us worthy witnesses of your Gospel and your love; pour out your mercy on humanity; renew your church; protect persecuted Christians; and quickly grant the whole world peace.”

During the prayer service, Pope Francis wore a stole that had belonged to Chaldean Father Ragheed Aziz Ganni, who was murdered in Mosul, Iraq, in 2007.

Father Ganni’s stole along with dozens of other items that belonged to men and women martyred in the 20th and 21st centuries are on display on the side altars at the basilica, which is cared for by the lay Sant’Egidio Community.

During the prayer service, at which Anglican, Lutheran and Orthodox clergy were involved, people who had been close to those honored as martyrs at the shrine spoke.

Karl A. Schneider’s father, the Rev. Paul Schneider, was the first Protestant pastor martyred by the Nazis for opposing their hate-filled doctrine. He was married and the father of six children.

“My father was assassinated in 1939 in the Buchenwald concentration camp because he believed the objectives of National Socialism were irreconcilable with the words of the Bible,” Schneider told the congregation. “All of us, still today, make too many compromises, but my father remained faithful only to the Lord and to the faith.”

The next to speak was Roselyne Hamel, the sister of French Father Jacques Hamel, who was murdered as he celebrated Mass July 26, 2016. The Archdiocese of Rouen has begun his sainthood cause with Pope Francis’ approval. Father Hamel’s breviary is preserved at St. Bartholomew’s.

“Jacques was 85 years old when two young men, radicalized by hate speech, thought they could become heroes by engaging in homicidal violence,” his sister told the pope. “At his age, Jacques was fragile, but he also was strong — strong in his faith in Christ, strong in his love for the Gospel and for people.”

His witness to Gospel values continues, she said, in the reaction of Christians who did not call for revenge after his death, but for love and forgiveness. And, she said, the family and local church have experienced “the solidarity of Muslims who wanted to visit our Sunday assemblies after his death.”

“For his family, there certainly is pain and a void, but it is a great comfort to see how many new encounters, how much solidarity and love were generated by Jacques’ witness,” she said.