With influx of migrants, some Germans think their concerns are ignored 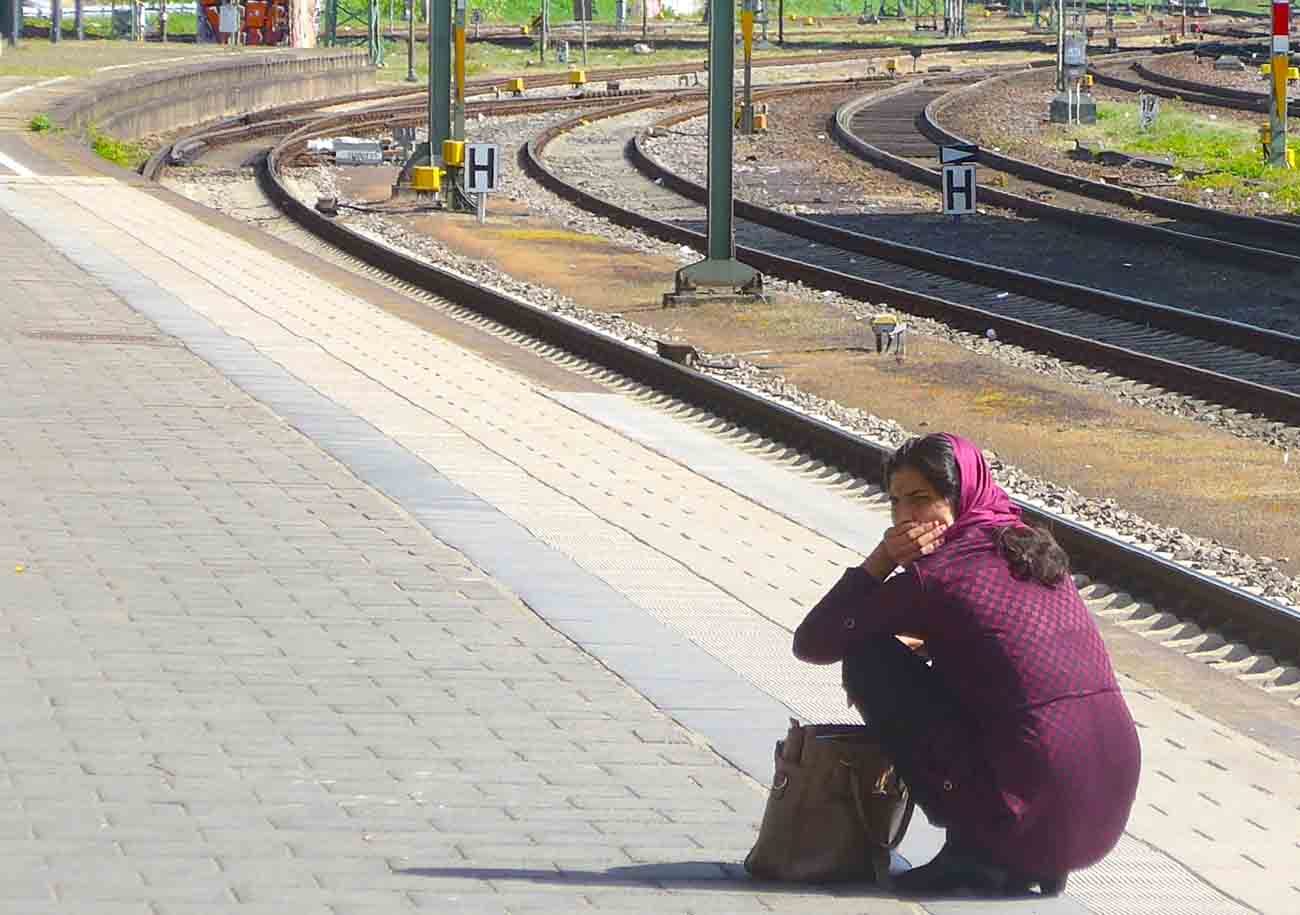 A Muslim refugee woman waits for a train April 11 in Heidelberg, Germany. Amid rising social unrest and an influx of Mideast migrants, German authorities, including church officials, are facing criticisms from ordinary people who believe their concerns are being ignored. (CNS photo/Zita Fletcher)

REGENSBURG, Germany (CNS) — Amid rising social unrest and an influx of Mideast migrants, German authorities — including Catholic Church officials — are facing criticism from ordinary people who believe their concerns are being ignored.

“For some migrants, it is hard. For others, everything is easy,” said Maria, a Filipina Catholic in her 50s who works as a cook in a fast-food restaurant. She and others interviewed by Catholic News Service asked that they only be identified by one name.

“We Filipinos work hard. We get education and training. We follow the rules and we don’t harm anybody. But all of the preferential treatment goes to the Middle Eastern migrants and the refugees,” she said.

A spokesman for the German bishops’ conference said the church does not favor a particular group. “For the Catholic Church in Germany, all humans are equal. We stand near by our sisters and brothers in faith, but we don’t (give privileges to) anybody,” said Matthias Kopp, conference spokesman. Kopp said more than 100,000 Catholic volunteers in Germany are committed to the aid of refugees.

Germany has received more than 1.1 million refugees since 2015. With a sharp rise in violence and terror attacks in the months following the Berlin Christmas Market terrorist attack, the atmosphere in Germany has become volatile. A profound distrust has emerged between the public and the government. Media outlets run stories of terrorist insurgency, racism, blame and cover-ups.

“Everything has changed. It is not safe in Germany anymore. Before the refugees came here, you could walk down the street drunk at 1 a.m. and nobody would bother you. Now, you have to be careful and watch out that nobody will hurt you,” said Schuster, a Munich resident. “We Germans are Christian. They (refugees) follow the Muslim religion, and they think it is OK to hurt people. That’s why there is all this violence. Bad things happen here all the time. But the police don’t report it. The government doesn’t tell you what is going on — they want you to think everything is OK. But it is not.”

Schuster said although he believes many Germans feel the same way, it is difficult for ordinary people to voice their beliefs.

“If we say any of these things out loud here, they call us Nazis,” he said. “That is how they dismiss us and what we say.”

Since December, the German bishops’ conference and local dioceses have made special announcements of activities and gestures in support of refugees and Muslim migrants, with catchphrases including the words, “unity” and “life together.” No special pastoral statements have been made by church leadership in response to terror attacks in Sweden, London, Russia or in German cities this year. This has left some parishioners feeling frustrated.

“I am sick of hearing the priests talk about the refugees in church. Every Sunday they make up something new. It’s become ridiculous,” said Barbara D., a German woman on a train after leaving Sunday services. “This time the readings were about the apostles drawing in fish. And do you know what the priest said? He said the refugees are like fish that we need to draw in. You cannot compare these people to fish — there is no comparison.”

Asked by CNS to respond to terrorist acts committed by refugees in Germany, Kopp said: “The German bishops’ conference condemns every act of terrorism.”

While he did not respond directly to questions concerning the German church’s support of Muslim immigrants, Kopp said the bishops’ conference feels obligated to assist Middle East Christian refugees.

“In our Guidelines for the German Catholic Church’s Commitment to Refugees, we underline among others: ‘The church stands by all people who are suffering. We are aware of our particular obligation toward Christians, large numbers of whom are having to flee from the countries of the Middle East and are seeking refuge in our country. They are our sisters and brothers in faith,'” said Kopp. “And: ‘Pope Francis reminds us what the task for all Christians is in today’s situation: Giving concrete hope to people who have lost their homes.’ The Church in Germany is particularly committed to this mandate in several topical areas.”

According to the bishops’ conference, the Catholic Church in Germany has 450 native-language parishes in 35 language groups. These parishes serve immigrant communities from around the world.

Migration policy remains an issue at the forefront of many people’s minds, as Germans across the country feel shaken and disturbed by recent acts of terrorism and other assaults linked to Middle Eastern refugees.

“There are too many of them here. It’s a strain on the system,” he said. “Chancellor (Angela) Merkel made a bad decision. I don’t like what is happening.”

“I used to believe and agree with what Chancellor Merkel said, but I don’t anymore,” said Berger, a tour guide in her 40s from Bavaria. “I can understand why we should help people in a war. But there needs to be some checks and balances.

“It is not the families that are the problem. It is the young men. They do not know how to behave at all,” she said. “I am worried, especially for my daughters. They are young single women. I want them to be free — to dress how they want, to be able to go out at night and have a beer. But it has become so dangerous here for women. That is what really concerns me.”

Will, a university student from Hannover, said he has and continues to support refugees and migrants, but believes stronger rules are necessary to stop criminal behavior.

“I think there is a war going on and, of course, we should help those people who really need our help,” he said. “But they need to respect us and follow the rules. People shouldn’t just come to a country and not be willing to change their behavior to follow that country’s rules.”

Anna, a hairstylist in her early 30s from the Upper Franconia region, voiced her concerns about dangers brought by migrants and worried that German citizens will be misunderstood. “People hear these things and think that we Germans are racist. We are not racist,” she said. “What you are seeing is our upset feelings.”

A Wurzburg resident and Catholic who identified herself only as Mrs. Beck said she believes religious conflict is the root of the unrest. She cited a recent debate about removing crucifixes from schools so as not to offend Muslim students.

“I can’t come to America and try to make everybody do things the German way. We should not have to change our way of life for them. They need to respect our laws and the fact that we are Christian,” she said.

Beck said the country already had problems with the assimilation of migrants, but that it became worse with the arrival of the refugees.

“Our government was careless. They did not solve one issue first before starting another one. And, when they brought the refugees over, they didn’t pay attention to what they were doing and made insufficient background checks. Now we realize that they have brought in criminals. We have our own criminals — we do not need any more.”

Kopp said the bishops’ conference was not aware of any frustration from the German Christian community.

“We haven’t heard about the frustration of these ‘many German Christians,'” said Kopp, adding that “we take everybody’s fear seriously.”

NEXT: Vatican says it would welcome visit by Trump