Motherhood: A vocation that grows and changes 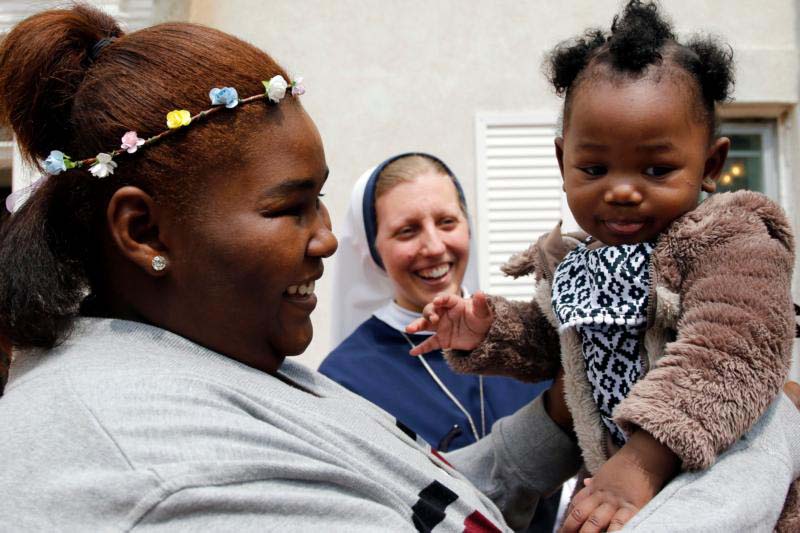 A woman holds her baby as Sister Brigid Ancilla, a member of the Sisters of Life, looks on during the annual Mother’s Day celebration May 8, 2016, at the religious community’s retreat house in Stamford, Conn. The conundrum of a mother’s vocation — for surely this lifelong and deeply heartfelt commitment can only be called a vocation — is that, even as we hold our children to our hearts, we prepare them for independence, for “their going.” (CNS photo/Gregory A. Shemitz)

In 1916, Padraig Pearse was executed by the British for his role in the Irish Easter uprising.

Pearse was more of a scholar and a poet than he was a warrior. But like many in the fledging rebellion against the British, he had a romantic view of Irish martyrdom.

One of his best-loved poems was about his mother, and as we celebrate Mother’s Day, the words that he attributes to her about his own approaching death might touch every mother’s heart: “Lord, thou art hard on mothers: / We suffer in their coming and their going.”

Pearse was prescient in suspecting that he would die young, leaving a mother behind in sorrow. A mother who had given birth to him in pain would be doubly burdened by the pain of his death. Any mother who has experienced a child’s death knows this terrible reality.

But mothers also experience “their going” in other, less heartbreaking but still profound ways. From the moment a child begins to grow in the womb — or we hear that an adoption is imminent — we know that change is afoot, that someone who is entering our life is beginning the inevitable journey away from us.

The child of our heart will eventually grow up. Any mom who has cried in the car after leaving her child at the first day of kindergarten or bid farewell to a child in a dorm room at a college far away knows this pain of separation and change.

The conundrum of a mother’s vocation — for surely this lifelong and deeply heartfelt commitment can only be called a vocation — is that, even as we hold our children to our hearts, we prepare them for independence, for “their going.” It’s both the glory as well as the loss that accompanies the vocation of motherhood.

A major part of the decision to embark on any vocation is the commitment to serve the world through our calling. It’s why someone chooses to be a priest, a sister or embarks on a marriage. Our response to this call is a response to God, and therefore a chance to make the world a better place.

Instead, motherhood extends and enlarges the love that is revealed in the vocation of marriage. Love desires life.

In his fascinating book, “Far From the Tree: Parents, Children, and the Search for Identity,” Andrew Solomon explores how love works through the differences between parents and children. His book focuses on children that are very different from their parents, including the child prodigy, the deaf child, the child with Down syndrome, the gay child.

And yet, in many ways he describes what every mother knows — every child, no matter how she resembles you, is her own person.

“Parenthood,” Solomon tells us, “abruptly catapults us into a permanent relationship with a stranger.”

Permanence is one of the markers of vocation — the vocation to religious life, a marriage, a decision to have children — they’re all meant to be “until death do us part” commitments.

And although everyone changes and grows within a vocation, motherhood casts us into a vocation where the “other” changes dramatically and where the control we initially feel gradually deserts us.

Every mother and every child can identify at least a bit with Solomon’s statement: “From the beginning, we (parents) … long for what may be life’s most profound compliment: their choosing to live according to our own system of values. Though many of us take pride in how different we are from our parents, we are endlessly sad at how different our children are from us.”

And therein lies another conundrum of this vocation: There comes a time when we step back and acknowledge that, even as our relationship blossoms, our work is largely done. Certainly, we remain supportive and present, and if we’re lucky, involved with grandchildren.

But as our children mature, our vocation demands a certain detachment. The mother of adult children may have a tongue sometimes scarred from biting, but her prayers for her children never end.

Our vocation as we grow older is to pray, to be supportive, to rejoice in our children and grandchildren, to credit ourselves for success and forgive ourselves for expectations never met. We did the best we could. Mothers must not be “endlessly sad” if a child sometimes chooses a different value than our own.

In Pearse’s poem, he imagines his mother saying, “I will speak their names in my own heart/ In the long nights;/ The little names that were familiar once …”

It’s what the vocation of motherhood produces: a heart that always remembers the little names, that always — no matter how old our children are — speaks their names in prayer in the long nights.

PREVIOUS: Heroic mothers in the Bible

NEXT: Motherhood, a labor of love