For some, high school retreat is the draw into Catholic Church 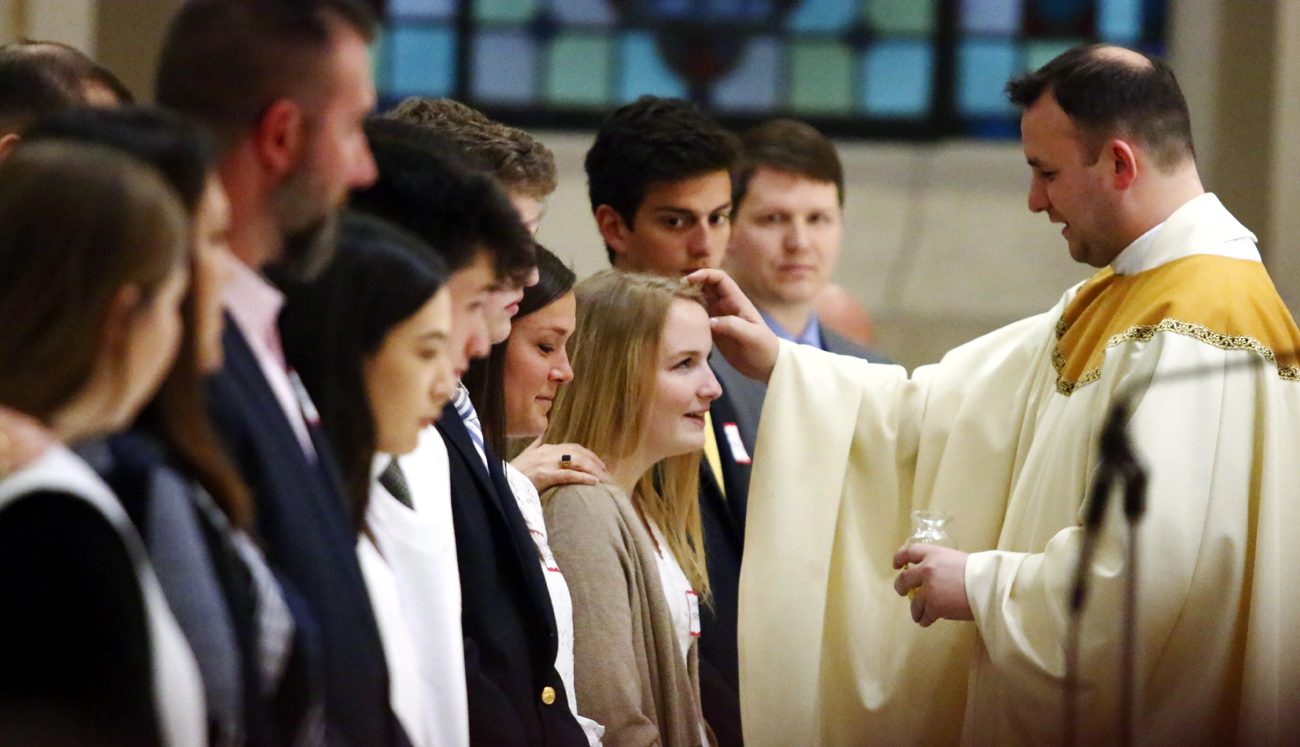 Father Michael Speziale confirms one of nine people (students and faculty) from Archbishop Carroll High School who were confirmed at Sacred Heart Church along with seven parishioners at the Easter vigil Mass April 15. (Photo by Sarah Webb) 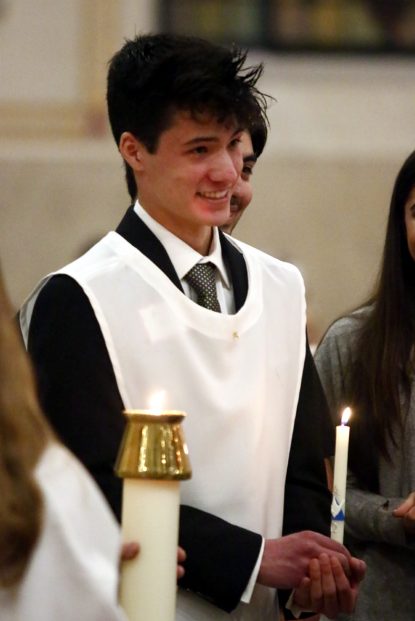 Andrew Carpenter, from Archbishop Carroll High School, is all smiles after being baptized into the Christian faith at Sacred Heart Church, Havertown. (Sarah Webb)

Adults and young adults receiving their Catholic sacraments is a joyous but not unusual event at Easter Vigil Masses around the Archdiocese of Philadelphia.

What is unusual is when a number of the candidates or catechumens have not so much a parish as a high school in common.

That was the case this year at Sacred Heart Parish in Havertown where the sacraments of baptism, Eucharist and or confirmation were administered by Father Michael Speziale at the invitation of Father Henry McKee, the pastor.

Father Speziale is in residence at Sacred Heart but his main ministry is as a faculty member at Archbishop John Carroll High School in Radnor.

“Father Mike Speziale and I work very closely together,” said Tom Phillips, the director of campus ministry at Carroll. “In our conversations with the students we noticed there were students who were seeking to receive all of their sacraments of initiation or complete their sacraments with confirmation, and with other faculty members we worked basically to get an RCIA program together at Carroll working with Sacred Heart Parish. Hopefully this is the start of something good at Carroll.”

Once the students were identified and instructed, Carroll staff reached out to their parishes of residence for permission to administer the sacraments at Sacred Heart at the Easter Vigil and all agreed, Phillips said. 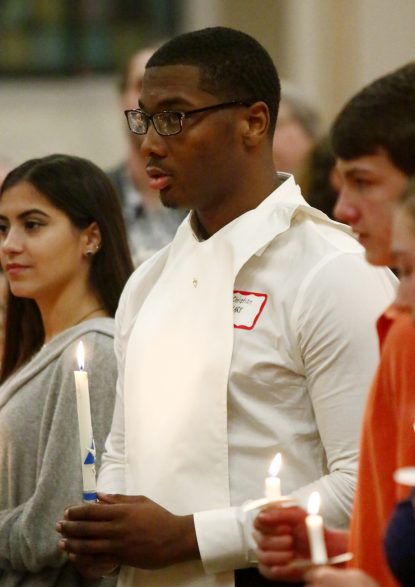 First of all there was Andrew Carpenter, a senior at Carroll who received baptism, confirmation and first holy Communion. Among his family, some are atheists and some of other faiths, and although he attended Carroll he really didn’t have a religion.

In his sophomore year Father Speziale, who teaches theology, asked everyone to stand who was Catholic. Andrew was the only one who didn’t stand.

When he said he had no religion Father Speziale asked if he would like to become Catholic. “I’m not sure,” Andrew replied, but he was intrigued by the question.

As time went on he became more interested, and earlier this school year a Kairos retreat really impressed him. He came to better understand what being a Catholic means.

“You know a lot about the Catholic faith, why don’t you become Catholic?” his friend, Sophia Chamberlain, urged. Andrew took RCIA under Father Speziale and at his baptism, Sophia was his sponsor.

To make it something of a family affair, Andrew’s sister Isabella, who attends St. Joseph’s University, was also baptized and confirmed.

“She graduated last year but we didn’t have RCIA then,” Father Speziale explained. “This was the first year we offered it and we already have some signups for next year.”

The peer-led Kairos retreats are offered to seniors in four different sessions at Malvern Retreat House and they are very effective, Father Speziale believes.

“They are a wake-up call, and great things happen at the retreats,” he said. “They are not mandatory but 80 percent of our seniors go.” 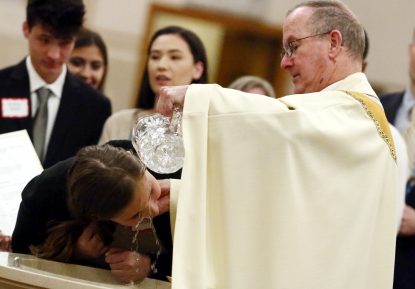 Tyler and Courtney Spencer are twins and seniors at Carroll. Their dad, who died when they were 7, was Catholic but their mother is not religious, Courtney explained.

“I was agnostic,” said Tyler, who for most of his schooling was in public schools. He first became interested in Catholicism through Sister Mary Kelly, SSJ, who teaches theology at Carroll. He came to see Catholicism as a beautiful religion that creates harmony on earth.

Courtney had a similar experience through theology classes conducted by Christine Rizzo, who also happened to be in charge of RCIA at Carroll. Courtney asked Miss Rizzo what the process would be for them to become Catholic and it was arranged for them to go through RCIA.

Jake Langley, a sophomore at Carroll who received confirmation at the ceremony, was already a practicing Catholic with a Baptist father and a Catholic mother. He was not previously confirmed because of technicality of location.

“We lived in Florida and I was baptized, went to Catholic school and made my first Communion,” Jake said.

But in his former Florida diocese confirmation is administered later than in this area, so when the family moved to Pennsylvania he hadn’t been confirmed even though all of his new classmates were.

“I told my religion teacher, so now I’ve been confirmed,” he said. 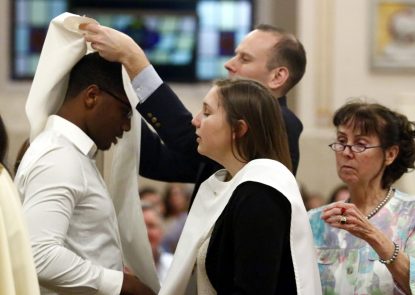 The baptismal sponsors of Christian Smith and Natalie Coughlin place baptismal garments on them as they are received into the Catholic Church. (Sarah Webb)

The administration of the sacraments was not limited to students. Ashlyn Llerando, a Spanish teacher at Carroll, was baptized Catholic as an infant but attended public school and her family never really practiced religion.

Her first real exposure to Catholic practice was as a freshman at Villanova University where she attended Mass with her roommate. But she was into athletics and really didn’t think she had time for an RCIA program.

Teaching at Carroll was a new experience for her with classroom prayer. At a faculty retreat she asked the retreat director to pray for her.

“She said to me, ‘You are not at Carroll by accident, you should get your sacraments,’” Llerando recalled.

Now, “I’m happy, it has been a good thing,” she said. “Father Speziale confirmed me. He was my RCIA director and he made it attainable and enjoyable.”

The bottom line: at Archbishop John Carroll High School, the “Catholic” in Catholic school is alive and well. 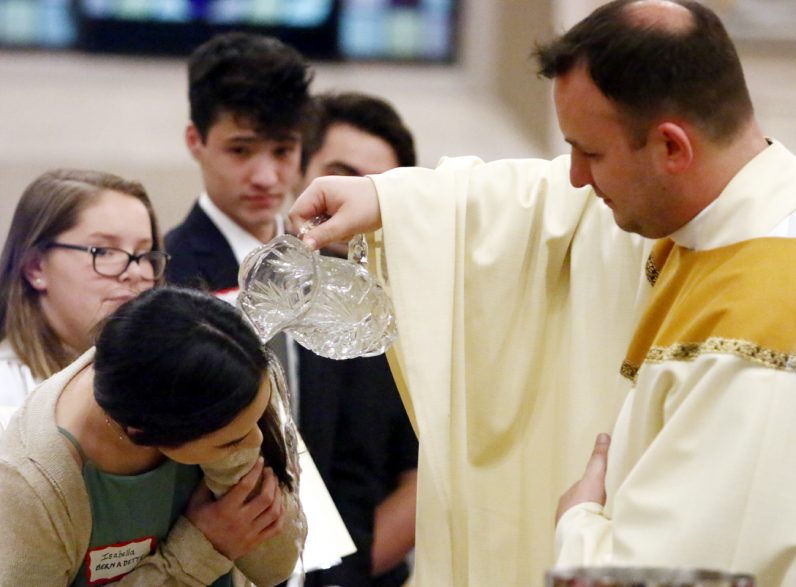 NEXT: True spirit of charity is served up piping hot in Chester