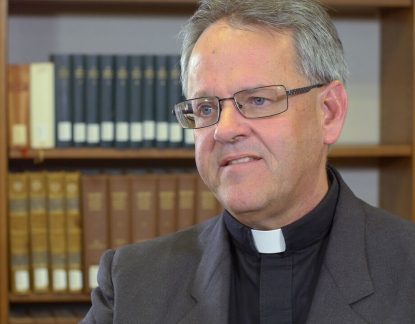 Father Thomas F. Dailey, a priest of the Oblates of St. Francis de Sales, has been named the full-time Cardinal Foley Chair of Homiletics and Social Communications at St. Charles Borromeo Seminary. The appointment is effective July 1.

Father Dailey, currently a professor of theology and director of the Salesian Center for Faith and Culture at De Sales University, has assisted with the work of the Foley Chair since 2013.

“The church’s many advancements in the realm of social communications were spearheaded by Cardinal Foley,” Father Dailey said. “He was a visionary who understood the power of the media and who saw the necessity of the church’s active involvement in this realm.”

As the full-time holder of the chair, Father Dailey will promote a deeper understanding of Catholic theology and pastoral education with an emphasis on communication technology and Catholic evangelization.

Father Dailey, a native of Bensalem ordained in 1987 for the Oblates, will also support St. Charles Seminary’s program of priestly formation by instructing seminarians in the fields of communications and homiletics – the study of effective preaching. He will also offer similar programs for priests, religious and laity involved in various ministries in the Archdiocese of Philadelphia.

Father Dailey will also engage in dialogue with journalists and other media professionals to further the goals of the chair.

“The work of the Cardinal Foley Chair,” said Father Dailey, “will highlight the necessity for seminarians and others to become heralds of the Gospel. Whether from the pulpit or via social media, sharing the Good News is our Christian mission, so we’ve got to be cognizant of the multiple dimensions of communicating in a digital world.”

In addition to teaching at the seminary, Father Dailey will perform research, lecture and publish in his field. Through presentations, workshops and mentoring he will contribute to the formation of the seminarians.

Each year the Cardinal Foley Chair currently supports three programming initiatives: a public forum to mark the beginning of the academic year in August; an annual lecture series connected to the feast of St. Francis de Sales, patron of Catholic journalists and writers, in January; and an annual symposium in celebration of the World Day of Social Communications in May.

In accepting the full-time position at the seminary, Father Dailey will relinquish his tenured position as theology professor at De Sales University, where he also founded the university’s Salesian Center for Faith and Culture.

In 2008, he was appointed the first Father Louis Brisson Chair in Salesian Spirituality, and is currently the senior ranking faculty member at the university. He has also taught at Immaculata University, the Washington Theological Union and the National Institute for Clergy Formation.

He holds a Doctorate in Sacred Theology (S.T.D.) from the Pontifical Gregorian University in Rome. He has lectured internationally on topics regarding biblical theology, Salesian spirituality, and higher education in the Catholic tradition. He has written, edited, and/or translated eight books and articles in twenty-six professional journals worldwide. His most recent work is “Live Today Well: St. Francis de Sales’s Simple Approach to Holiness” (Sophia Institute Press, 2015).

He is also a regular contributor to the official blog of St. Charles Seminary, Seminarian Casual.

The Foley Chair was established in 2011 in the name of beloved Philadelphia native priest Cardinal John Foley.

He was the editor of the former Catholic Standard and Times newspaper for 14 years and a professor at St. Charles Seminary for 17 years before being named an archbishop and St. John Paul II’s adviser for social communications at the Vatican in 1984.

He was a trusted associate, mentor and leader for countless Catholic and secular journalists during his long ministry until his death in 2011.

The second annual John Cardinal Foley Symposium and dinner on Wednesday, May 24 will feature a panel of communications professionals discussing the message of Pope Francis on “Communicating Hope and Trust in Our Time.”

NEXT: For some, high school retreat is the draw into Catholic Church