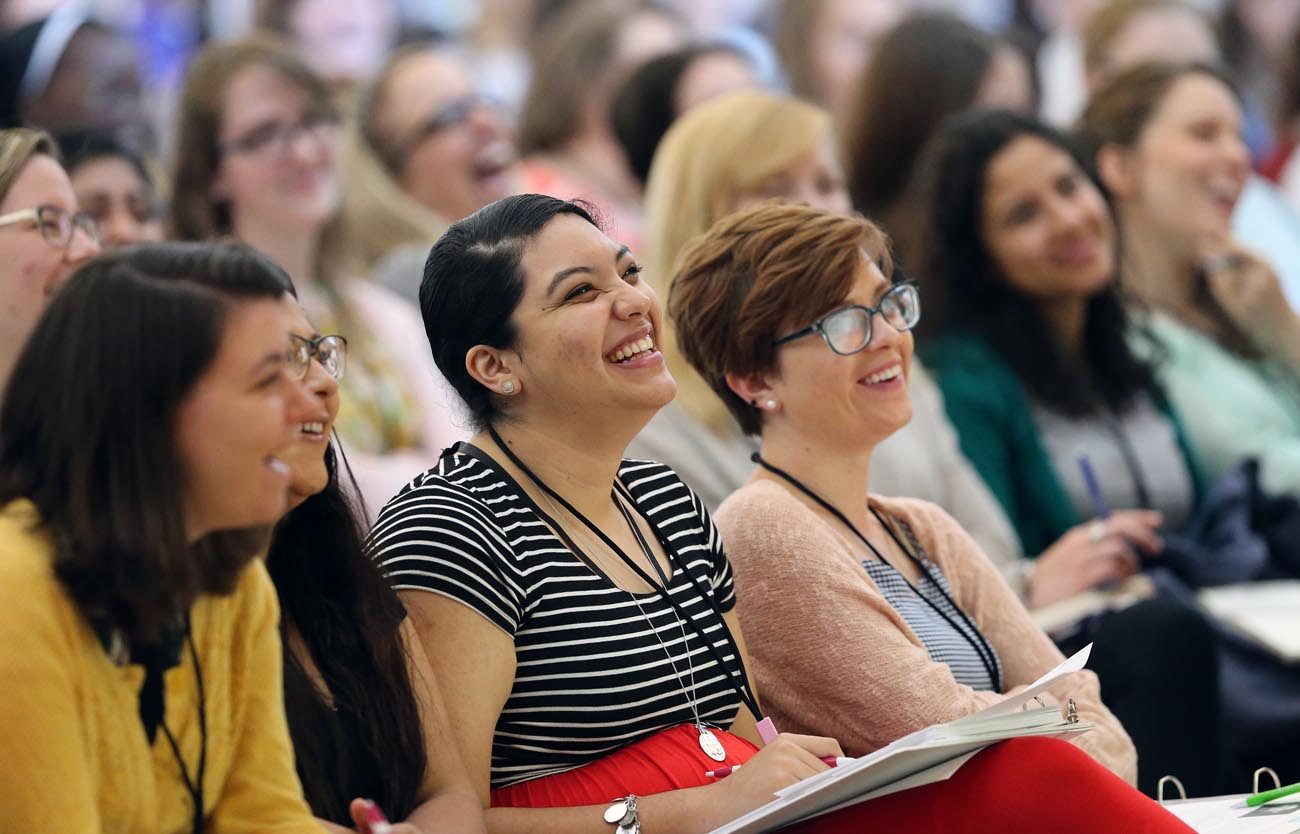 Women laugh as they listen to a keynote speaker during a leadership forum for young Catholic women in 2016 at The Catholic University of America in Washington. In dioceses across the U.S., the 300 attendees are now implementing their "action plans," new initiatives inspired by their gifts, interests and leadership skills.(CNS photo/Bob Roller)

WASHINGTON (CNS) — Attending a Catholic young women’s leadership forum taught Michelle Nunez, 23, that “our vocation as women is to be receptive to God’s gifts.”

What Nunez learned about the “feminine genius,” a term used by St. John Paul II to describe the gifts of women, helps her, a year later, in her volunteer work with immigrants at the Humanitarian Respite Center in McAllen, Texas.

Nunez and 300 young women representing dioceses from all 50 states are using their specific gifts to carry out their “action plans” following the June 2016 Given Forum at The Catholic University of America. An initiative of the Council of Major Superiors of Women Religious, the forum brought young Catholic women together for a weeklong immersion in “faith formation, leadership training and networking.”

“We wanted each (of the attendees) to receive these truths: You are a gift; you have received specific gifts of nature and grace; the church and the world await your unique expression of the feminine genius,” said Sister Bethany Madonna, a Sister of Life and co-chair of the event.

Part of the application process required women to submit “action plans,” new initiatives inspired by their own gifts, interests and leadership skills, which would be implemented in the months following the conference.

As her “action plan,” Nunez, from Houston, originally planned “to create a nonprofit, holistic agency to work with Hispanic women, to have different courses to take care of their mind, body, spirit.” But after hearing Sister Norma Pimentel, a member of the Missionaries of Jesus and executive director of Catholic Charities of the Rio Grande Valley, at the conference, Nunez said, “I just knew I needed to work with her.”

After graduating in December 2016 from Our Lady of the Lake University in San Antonio, she traveled to the Humanitarian Respite Center to volunteer alongside Sister Pimentel.

The center assists immigrants from Central America, who are seeking asylum and traveling to meet family members in the United States. “ICE (Immigration and Customs Enforcement) releases them from the detention center where they are process for about three days. We pick them up from the bus station … give them clothes, they shower” and wait for their buses to meet family members in other parts of the country.

Nunez sees her volunteer work as a ministry of listening. “While they’re waiting there, I sit down with them and talk to them,” Nunez said. She hopes to be “a voice for the voiceless” to “share a little bit of their stories with other people here in the U.S.” Ultimately this will bring her closer to the “bigger picture,” her nonprofit.

In forming her action plan, Casey Bustamante, 30, saw a need for a “gathering of young adults, active military and spouses.” Bustamante, associate director of young adult ministry with the U.S. Archdiocese for the Military Services, is organizing the first conference for young adults who are military ministry leaders June 16-18 in Northbrook, Illinois.

After the Given Forum, Bustamante considered the ways the conference itself could be a model for developing the military conference. She wanted to incorporate some of the training and tools she had received, such as a session on how to best engage with the press and media, led by Catholic Voices USA, whose mission is to articulate the church’s teaching in the public square.

“Some of the feedback that I’ve received from young adults is that it’s a challenge to talk about the hot-button issues with their peers and among other military members because our society values are changing, and the military culture is not separate from that,” she said.

Another attendee, Corynne Staresinic, 22, from Cincinnati, created a website called The Catholic Woman that features weekly letters and quarterly videos submitted by “women of all ages, backgrounds and vocations” to “illustrate the many faces and voices of Catholic women.”

Staresinic, who graduated in May 2016 from Franciscan University of Steubenville in Ohio, said the idea for the project began after she read St. John Paul II’s “Letter to Women” during her senior year. “That was the big game-changing moment in my life,” Staresinic told Catholic News Service. The pope’s letter, along with the diverse stories of the female speakers at the conference provided the model for The Catholic Woman’s letters.

Prior to the March 8 website launch website, Staresinic looked to “Humans of New York,” a series of photos and captions that offers a glimpse into the lives of New Yorkers, and watched interviews of the creator, Brandon Stanton, to see “how he is able to get insightful and deep answers from people on the streets.” She also read the book “In the Company of Women,” a collection of interviews with women entrepreneurs and artists, for guidance on creating a letter-writing guide for website contributors.

The goal of the website, says Staresinic, is to “move away from reductive stereotypes of Catholic women and instead speak of them as the unique persons they are.”

Katrina Even, 25, and Dani Bell, 27, of Kansas City, Missouri, connected on Facebook prior to attending the forum, and after meeting in Washington, decided to team together. In conversations while waiting in the airport back home, Even told CNS that their plan was born. The two felt a “strong pull to share what we had learned with the women in our area” and organize a local Given forum.

Like the original Given Forum, Given-KC continues to plant seeds in the lives of its participants. Carrying out her action plan, said Even, “gave me this confidence that I do have gifts to share and the Holy Spirit does work through me. … It has helped me discern other things in my life.”

As her action plan, Samantha Povlock, 25, brought her passion for the intersection of feminism and Catholicism together to create FemCatholic, a website to promote “women’s voices in the church and in the world.”

Part of the site features a “Dear Edith” column, inspired by St. Edith Stein, who Povlock refers to as “the feminist saint” because of Stein’s essays on women. The column is a platform where women can submit questions and other women can respond.

“I wanted a place where women could reconcile the teachings of the church with their real life experience,” said the Chicago-based working mom.

The concept of the Given forum encouraged Povlock as she worked on her plan, particularly the reminder to focus on “the gifts that you have been given specifically.”

“Who am I? And what plan is God inviting me to pursue?”

Such positive results that emerged from the original Given Forum give rise to the possibility that another similar, national event may convene in the future.

“The fruits of Given 2016 have been superabundant in the lives of the attendees and for the life of the church,” Sister Bethany Madonna said, “and we are currently exploring the possibilities of making Given a recurring event.”

NEXT: Bishops tell lawmakers to focus on poor in upcoming budget