College presidents appeal to homeland security for meeting on ‘dreamers’ 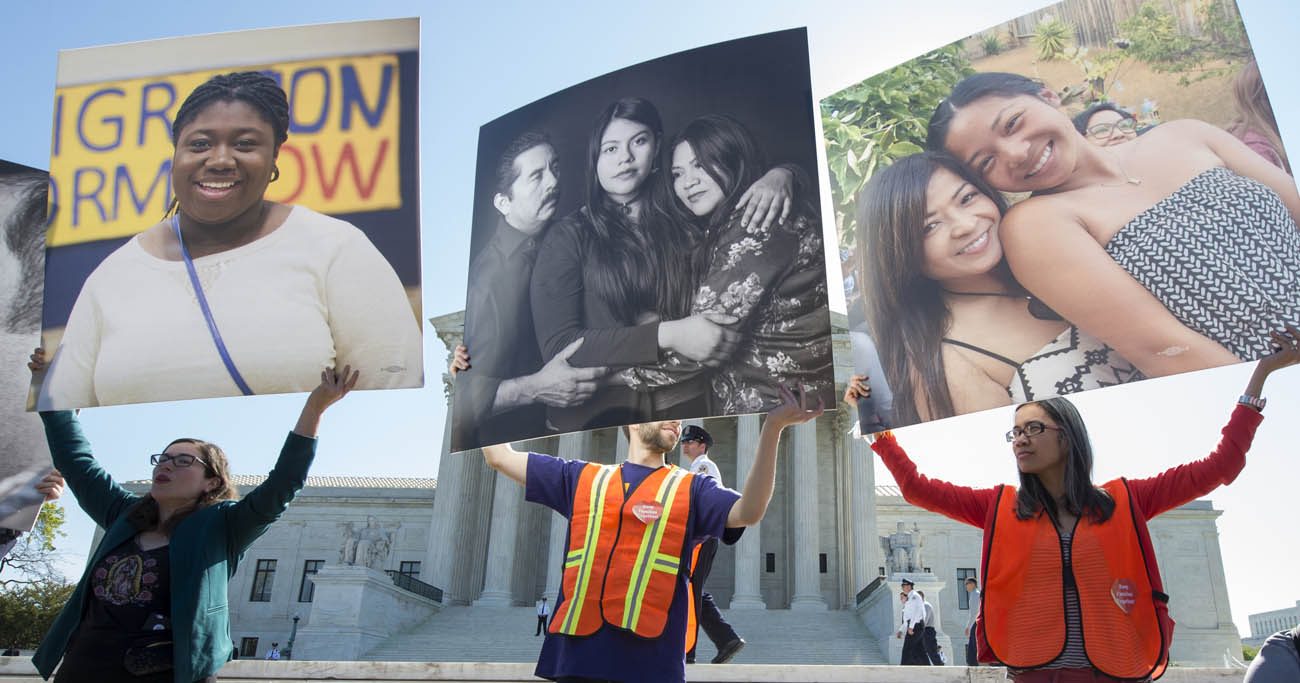 Immigration supporters are seen outside the Supreme Court April 18, 2016. On May 23, more than 65 college presidents representing U.S. Catholic institutions asked for a meeting with the secretary of the Department of Homeland Security about the Trump administration's policy on Deferred Action for Childhood Arrivals, known as DACA. (CNS photo/Michael Reynolds, EPA)

WASHINGTON (CNS) — Worried about the fate of some of their students, more than 65 college presidents representing U.S. Catholic institutions asked for a meeting with the Secretary of Homeland Security to talk about immigration policy.

“As leaders of Catholic colleges and universities, we are dedicated to educating students from all backgrounds. In keeping with this commitment, many of our institutions are home to young men and women who are undocumented and have met the criteria for Deferred Action for Childhood Arrivals (DACA). We are deeply concerned about the futures of our undocumented students,” said the May 23 letter addressed to Department of Homeland Security Secretary John Kelly.

In the letter, they cited incidents in which DACA recipients have been placed under immigration detention, including a case in which one of them was deported, and said that “recent actions and statements by Immigration and Customs Enforcement (ICE) about young people who met the DACA criteria raise many questions about the safety of our students.” They referred in particular to a tweet from ICE that said: “DACA is not a protected legal status, but active DACA recipients are typically a lower level of enforcement priority.”

Addressing Kelly, they said: “implementation of immigration enforcement policies falls under your discretion. We respectfully request a meeting with you to better understand how enforcement agencies are approaching DACA holders.”

John Gehring, Catholic program director at Washington’s advocacy group Faith in Public Life, which along with the Association of Catholic Colleges and Universities helped coordinate the effort, said there were worries because of “aggressive enforcement tactics we’re seeing around the country.” And since Kelly is Catholic, they wanted to convey to him that “the Catholic community is concerned with these aggressive actions,” Gehring said in a phone interview with Catholic News Service. He added that the culture of fear those aggressive actions have created is “unacceptable.”

The list of signers includes the presidents of The Catholic University of America in Washington, Trinity Washington University, as well as Villanova, Gonzaga, Fordham, Loyola and Santa Clara universities.

The college presidents say they want to “clarify” the administration’s stance on the special status granted to the students via the Obama-era’s DACA policy that allowed minors who had been brought into the country without proper documentation a temporary reprieve from deportation and a work permit, if they met certain conditions.

As a presidential candidate, Donald Trump said he would do away with the DACA policy. As president, he said he would decide what to do about the policy “with heart” and has said that it’s a “difficult” decision to grapple with. Some of the recipients are “absolutely wonderful kids,” he said in a February news conference, but then immediately also said that some DACA recipients are “gang members and they’re drug dealers, too.”

The college presidents said that as the academic year concludes, they worry about what the future brings because “many of these students will leave our campuses for internships, summer programs and jobs. Our prayer is that they return.” They said they want to meet with Kelly to discuss the administration’s policies and request that he take steps to protect their immigrant students who are at risk of deportation.

Gehring said the Department of Homeland Security has acknowledged receiving the letter.

The students for whom the college leaders are advocating are known in immigration circles as “dreamers” because of a bipartisan bill called the Development, Relief and Education for Alien Minors, or DREAM Act, that failed to pass in 2010. It would have granted residency in the country for some unauthorized persons brought in to the country as minors, if they met certain conditions.

“Our shared faith calls us to protect the most vulnerable among us,” said the letter signed by the college presidents. “Over the years, we have opened the doors of our colleges and universities to dreamers and advocated for comprehensive immigration reform so that they and their families can live safe, full lives in our country.”

Jesuit Father Kevin Wildes, president of Loyola University New Orleans, said sending back young men and women to countries they don’t know is “morally wrong,” particularly when they contribute much to the U.S.

“We are committed to doing everything we can to protect these students. We urge Secretary Kelly and President Trump to do the same,” said Father Wildes in a news release about the letter.

Patricia McGuire, president of Trinity Washington University, said her institution would stand in solidarity with “dreamers” and other immigrants.

“No nation can claim greatness by treating our youth as dispensable because of conditions for which they are not responsible,” she said. “We reject as cruel and immoral, and will resist to the greatest extent possible, any government effort to harm our students and their families.”

John Garvey, president of The Catholic University of America in Washington, said the Catholic Church has always stood with immigrants but particularly with the young and with families seeking a better life.

“In our time, some of those young people are university students who have qualified for DACA protection,” he said. “While the need for immigration reform is evident, we hope that policymakers will pay particular attention to the integrity of the family, the importance of work and the dignity of the human person.”

Others spoke of how Catholic higher education traditionally “has welcomed students on society’s margins,” and recalled the pope’s words during his apostolic visit to the U.S. in 2015 when he said immigrants provide “many gifts” to a nation.