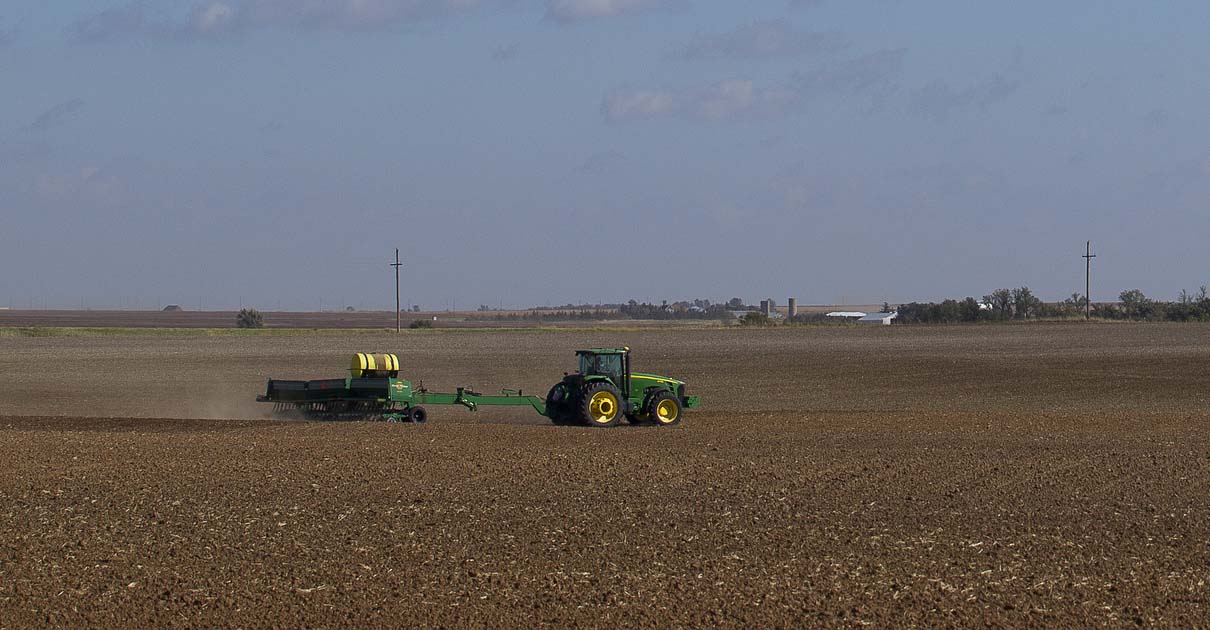 A tractor plows a field in 2013 on a farm in St. Leo, Kan. Many family farmers in the United States are facing the worst combination of events since the "farm crisis" of the mid-1980s. (CNS photo/Tyler Orsburn)

WASHINGTON (CNS) — Many family farmers in the United States are facing the worst combination of events since the “farm crisis” of the mid-1980s.

After a relatively lengthy period of prosperity in the early part of this decade, prices for “row crops” — corn, soybeans and wheat — have slid to levels where farmers spend more to raise the crops than they’ll get back in sales. Many regions of the country have been stricken by drought, which may raise crop prices, but reduces their yield and quality.

According to a fact sheet produced by the Washington-based National Farmers Union, the 2017 debt-to-asset ratio is the highest the agriculture industry has seen in three decades, which harkens back to the farm crisis in the 1980s. Moreover, lenders are hiking interest and collateral requirements for loan terms because of the heightened risk, presuming loans can be had; loans are down 40 percent from year-ago levels, the steepest one-year drop in two decades.

The toughening times aren’t restricted to crop farmers. “A lot of our dairy farmers have called us and said you’ve got to do something about this milk pricing structure,” said James Ennis, executive director of Catholic Rural Life, in a May 11 telephone interview with Catholic News Service. Milk production is up, and prices are depressed. Canada’s decision in April to halt milk imports from the United States brought anger and anguish from many farmers in America’s dairy belt.

The milk issue is a problem that can’t be fixed overnight, say, before the May 15 feast of St. Isidore, the patron saint of farmers and of Catholic Rural Life. It’s an item that will have to be proposed for next year’s “farm bill,” a multiyear law that shapes federal agricultural policy as well as national policy on such things as Temporary Assistance for Needy Families — what used to be known as food stamps — to win support from lawmakers representing cities and large metropolitan areas.

Ennis has visited eight U.S. dioceses this year, making nine presentations on Catholic Rural Life’s new document, “The Vocation of the Agricultural Leader,” which was presented in December to Pope Francis at the Vatican. On those visits, Ennis has been getting an earful from farmers and ranchers.

“Farming is a unique vocation because of our dependence upon food for life,” he told CNS. “Therefore, I think we do need to see farming and that culture as a unique industry. It’s not simply another industry that we let market forces control everything: ‘If we can’t be competitive, we just import from somebody else.’ That creates all sorts of food insecurity issues.”

Farming as an industry may seem like an unusual concept. For one thing, farming and agriculture now account for only 2 percent of the U.S. economy, according to Roger Johnson, National Farmers Union president. For another thing, family farmers themselves have only recently gotten their mindset adjusted that way.

When the 1980s farm crisis hit, Johnson said, ” there was this enormous sense of guilt and failure — to family farmers in particular — if you were having financial troubles, at risk of losing the farm.” There were massive farm closings then. Now, he added, letting go of the farm is seen as more of a business decision, but that doesn’t necessarily lessen the pain.

To that end, the National Farmers Union has composed a letter to be sent to religious leaders throughout rural America asking for their help in staving off the unintended consequences of a farm crisis.

“The last time economic conditions for farmers were so difficult, churches in rural communities were absolutely critical to connecting troubled farmers to emergency services. Unfortunately, the current farm economy outlook prompts us to ask you for that support again,” the letter says.

“There are likely farmers and ranchers in your community who could utilize financial advice and mental health services,” it continues. “Very often farmers and ranchers are not aware of such resources, and there are many cultural, familial and personal challenges that discourage producers from utilizing them. That is why it is so important that we work together.”

One thing that doesn’t make this farm crisis as bad as the 1980s version is that interest rates and debt loads are not as high now as they were then, Johnson told CNS. But one aspect that’s all too similar is that newer farmers, those in the business for 10 years or less, are the ones most affected by the crunch. “We lost a whole generation of farmers last time,” he noted.

To hear Catholic Rural Life’s Ennis, there’s some truth for farmers in the saying “go big or go home”: increasing the farm or ranch’s size, or joining a co-op with better buying power. Another option he suggested is to switch to organic production, which can bring higher prices.

A renewed farm bill, Ennis said, has to contain “agriculture policies that can provide safety nets for farmers.” The U.S. Department of Agriculture, he added, must continue “to advance multiple areas of agriculture. For instance, research into sustainable and organic agriculture as well, to help farmers diversify and differentiate.”

The National Farmers Union’s Johnson echoed Ennis’ call for the safety net. “There are two circumstances when farmers need help. One is when disasters strike,” he said, “but the other one is when the economic formula collapses, and that happens also fairly often and usually for extended periods of time. This time around, it makes it a little bit like the ’80s, in that we had a pretty big run-up in farm prices and in income” before this extended downturn.

“When the market price goes up, the cost side goes up very quickly in response,” including for seed, pesticide and land, Johnson added. But when commodity prices plunge, he said, other costs go “what economists call ‘sticky’ on the downside,” dipping only marginally. “We’ve got net farm income that is right at 50 percent of what it was about four years ago.”

As Catholics, Ennis said, “it’s important to support the industry in little ways and big ways. We encourage every diocese to have a rural life day where they go out and celebrate, they bless the deed, bless the soil.” He’s got a list of two dozen dioceses doing just that.

Individual Catholics, he added, should make “intentional decisions to support local farmers as much as possible. These are small, incremental decisions, but they make a difference. Support your local farmers market where you can.”

NEXT: Priest at St. Charles Seminary named bishop for Atlanta