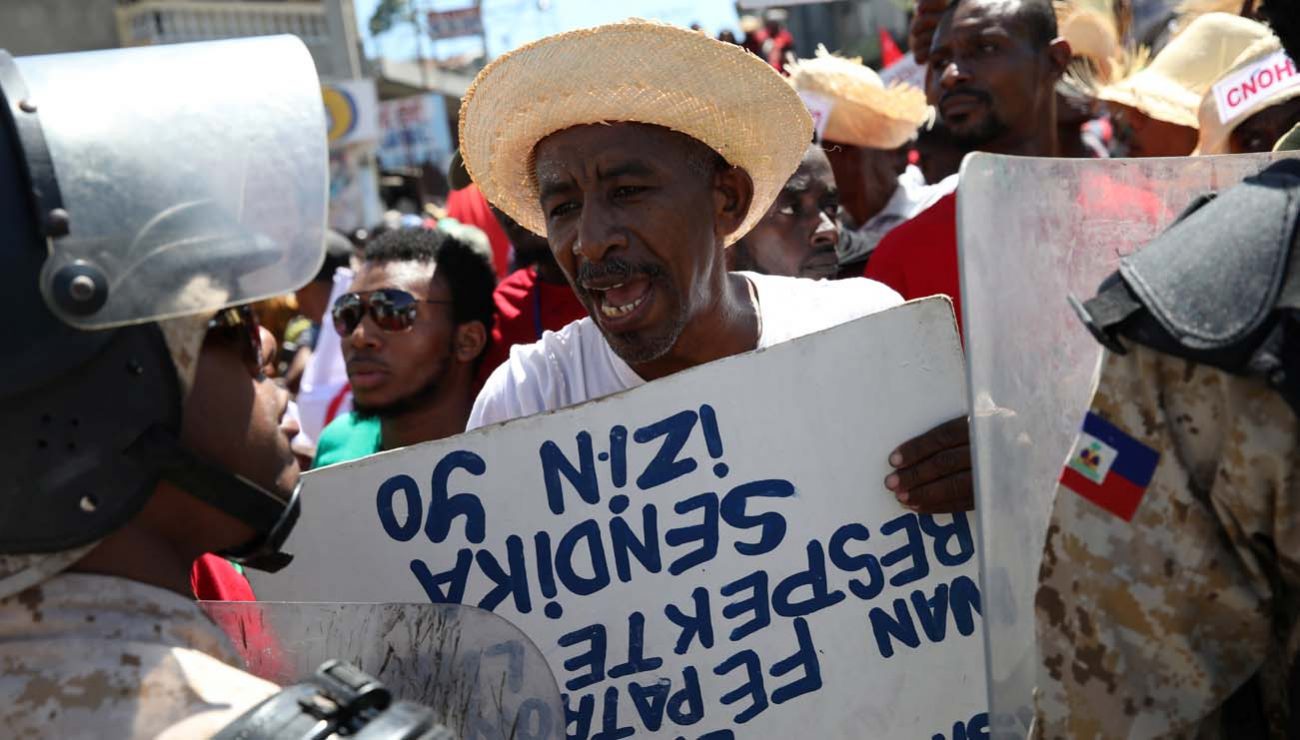 A man argues with a Haitian National Police officer March 1 as a police line blocks a street during a march calling for better labor conditions in Port-au-Prince. Haitians in the U.S. since a devastating 2010 earthquake are urging the U.S. Department of Homeland Security to renew their Temporary Protected Status designation because conditions have not appreciably improved in their homeland. (CNS photo/Andres Martinez Casares, Reuters)

WASHINGTON (CNS) — Wilson Jean-Baptiste is worried that in less than a year, he and his wife, Myrlande, will be left with a stark question: What to do if the U.S. government orders her to move back to Haiti because she no longer has protected status under immigration law.

Wilson Jean-Baptiste, a U.S. citizen who lives in Boston and asked that the couple’s names be changed in case his wife decides to stay in the U.S. illegally, described Haiti as no better off than when he came north more than 40 years ago.

He told Catholic News Service May 11 that his homeland may even be worse as it struggles to recover from a devastating 2010 earthquake.

Myrlande Jean-Baptiste is in the U.S. as a Temporary Protected Status holder. The status was designated by the U.S. Department of State for Haiti days after the earthquake, allowing Haitian nationals in the country to stay because of adverse conditions in their homeland.

The couple fears separation. It would not be good for their 11-year-old son, Wilson Jean-Batiste said.

The Jean-Baptistes are among more than 58,000 Haitians facing the possible forced return to their homeland if the Temporary Protected Status designation, or TPS, is not renewed by Secretary of Homeland Security John Kelly. The decision whether to extend this designation must be made by May 23. The deadline allows for a 60-day comment period before the status expires July 22.

The couple’s fears are widespread among Haitian enclaves in places such as Boston, New York and Miami. Advocates have been working to ease those fears while reaching out to Kelly and members of Congress who may hold more sway.

A Temporary Protected Status designation can be made for any country because of a natural disaster, continuing armed conflict or other extraordinary conditions under the Immigration Act of 1990.

Haitians’ concerns emerged after an April 10 memo from the acting director of the U.S. Citizenship and Immigration Services that recommended ending the designation became public. The memo from James W. McCament to Kelly, said “conditions in Haiti no longer support its designation for TPS.”

McCament called for delaying the effective date of the termination for six months, to Jan. 22, 2018, to allow “for a period of orderly transition” for Haitian nationals.

Advocates disagreed with McCament’s assessment and said Haiti is experiencing the same dire social challenges and deep poverty that existed when the TPS designation was made days after the country’s devastating January 2010 earthquake. The designation has been renewed for 18-month periods since.

Marjean Perhot, director of refugee and immigration services for Catholic Charities in Boston, said news of the memo sparked confusion among Haitians because many thought it was a final order. The archdiocesan program and its immigrant network partners have spent the last month explaining the situation and quelling concerns, she told CNS.

Haiti’s government leaders also have said they would like to see the designation extended, saying that absorbing tens of thousands of people into the country would tax the ability to meet their basic needs. The poor Caribbean nation continues to struggle to recover from the earthquake that destroyed much of the region around Port-au-Prince, the capital. The disaster killed 300,000 people and left 1.5 million residents homeless.

Complicating Haiti’s plight, Hurricane Matthew in October 2016 wiped out farmland in the country’s fertile southwest peninsula. An ongoing cholera epidemic, blamed on poor sanitation at a United Nations peacekeeping base, has affected more than 800,000 people and resulted in more than 9,000 deaths since October 2010.

For those reasons, advocates such as Perhot and Archbishop Thomas G. Wenski of Miami want to see another Temporary Protected Status extension for Haitian nationals.

Not renewing the designation would accomplish “no humanitarian purpose,” Archbishop Wenski told CNS May 10. “Certainly it doesn’t in any way advance the interest of the United Sates.”

“Haiti is a fragile country that has difficulties in providing for the inhabitants on the island and to expect Haiti to receive up to about 58,000 people that are here now with the benefit of TPS would be an enormous strain,” Archbishop Wenski said.

“We have to understand that TPS recipients, most of them, are working and we can presume a good number are helping relatives back in Haiti with remittances. If they have to leave the United States, that means the support would disappear.” Archbishop Wenski said.

Extending Temporary Protected Status has gained bipartisan support in Congress. Florida’s two U.S. senators, Marco Rubio, a Republican, and Bill Nelson, a Democrat, were joined by eight of the state’s congressional representatives in urging Kelly to grant the extension. The Congressional Black Caucus also sent Kelly a letter in support of an extension.

And more than 400 faith-based leaders and organizations called on Kelly as well in an early May letter, saying the country should not turn its back on “the vulnerable Haitians whom we pledged to welcome.”

A spokeswoman for Kelly said a thorough assessment of conditions in Haiti is underway.

“Secretary Kelly hasn’t made a decision on TPS for Haiti,” Joanne Talbot of the department’s Office of Public Affairs, wrote in an email to CNS May 11. “The secretary’s decision will be based on a thorough assessment of the conditions in the country; separately he has asked the staff for detailed information to increase his understanding of how the program operates. The two actions are separate and distinct.”

Talbot’s message came in response to an Associated Press story that detailed communication in U.S. Citizenship and Immigration Services internal emails showing a top immigration official was seeking crime data on Haitians who qualify under the TPS program as well as how many were receiving public benefits. TPS holders are not eligible for welfare benefits.

“The statute doesn’t say whether to take into consideration if one TPS holder ran a red light. That’s never a criteria for humanitarian relief,” she said.

“It’s immoral to send a people back to a country where they can’t provide for themselves and inconsistent with human dignity,” Bussey added. “That’s why we have TPS to protect people from having to return to these dire situations.”

Bill Canny, executive director of the U.S. Conference of Catholic Bishops’ Migration and Refugee Services, agreed that extending Temporary Protected Status was necessary, saying that such a step would be reasonable and an act of compassion.

He said that the impact of 58,000 people returning to Haiti could contribute to an already fragile situation. He also said that in some cases Haitians have married U.S. citizens and that forcing Haitian nationals to return home would lead to family separation, a situation long opposed by the U.S. bishops.

Archbishop Wenski and other advocates reiterated calls for the U.S. to open the door for permanent residency for Haitian nationals.

“It’s now over seven years since the earthquake. I think we may have to drop the ‘temporary’ and call it humanitarian and look at it from that angle,” Archbishop Wenski said in calling for the U.S. to reform its immigrations laws.

The current setup under the law “shows the immigration system is broken and a bit rigid,” he said. “There should be a way in the law that we have an alternative besides forcing them to go back or continuing into a limbo type status that is, as many critics say, not temporary. The law should be flexible to allow another option, to allow them to adjust to permanent legal status.”