Since ’47, donor has asked flowers be put at Mary statue for Mother’s Day 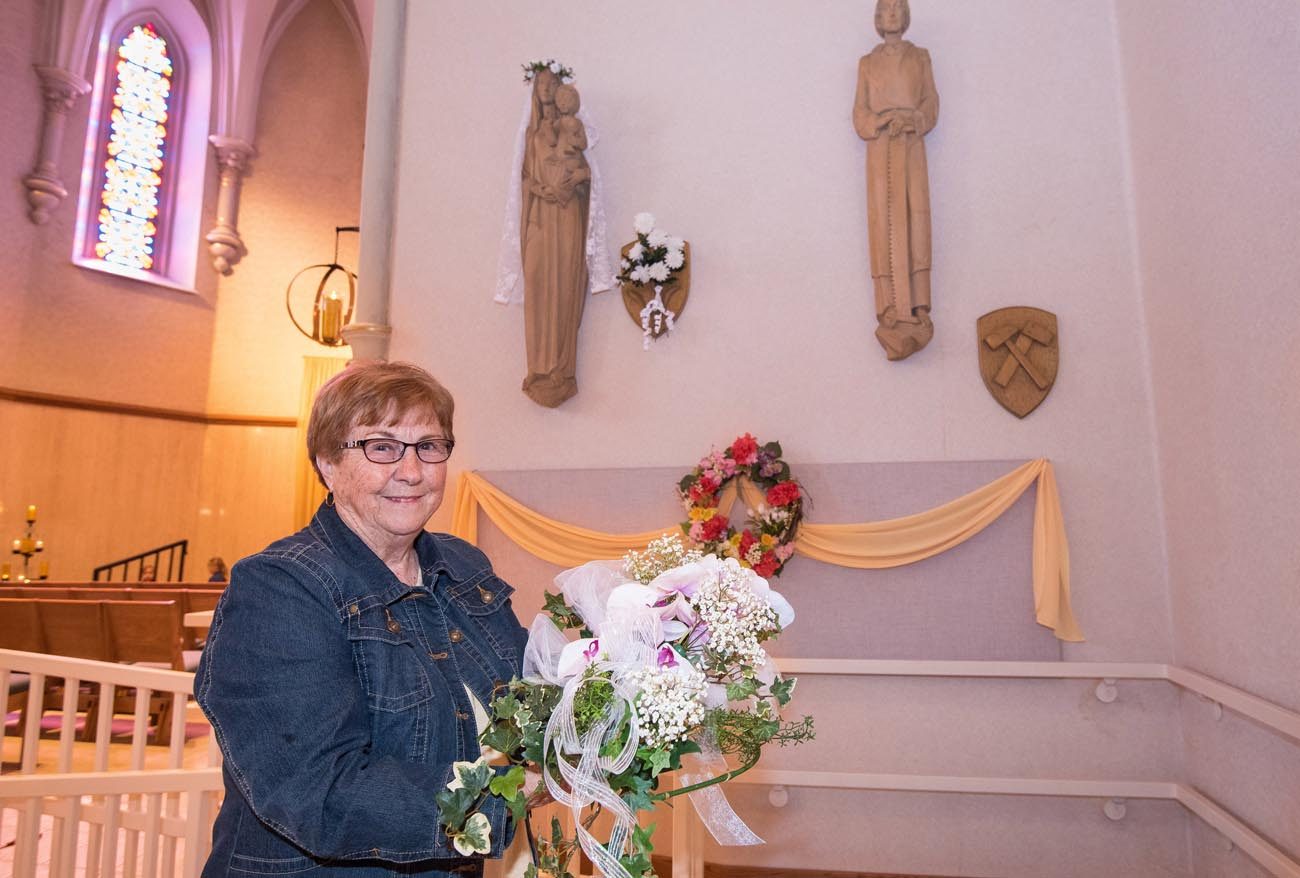 Karen Mulry holds a purple orchid corsage, similar to one placed on the statue of Mary, seen in the background May 4, at St. John Nepomucene Church in Little Chute, Wis. An anonymous request to place flowers on the statue for Mother's Day has been sent to Reynebeau Floral in Little Chute for 70 years. (CNS photo/Sam Lucero, The Compass)

For the past 69 years, flowers have shown up at the statue of Mary courtesy of an anonymous donor. Though parishioners enjoy the sight of the lovely flowers, no one has figured out who the donor is.

Karen Mulry, a parishioner who is retired from her family’s florist business, said every year an envelope with a one-sentence letter and a check arrives at Reynebeau Floral in Little Chute on the Thursday or Friday before Mother’s Day.

“It’s always written the same and says, ‘Dear Florist, would you please put the annual purple orchid by the Blessed Virgin again this year? Thank you very much.’ The first check was for $2 and each year, it increased a little,” Mulry told The Compass, newspaper of the Diocese of Green Bay.

“I remember that first one because it was my first Communion that year,” she said. That was 1947.

Her parents, Jack and Viola Reynebeau, owned and operated the florist business that they had started in 1935. “My mother did the orchid as a wrist corsage because the arms of the statue were extended,” Mulry continued. “After the church was remodeled, the statue was hung on a wall. Now we do a pot of flowers to set at Mary’s feet.”

As the years went on, Mulry said the employees always anticipated the letter and made sure to save one or two purple orchids for Mary.

“You know, we don’t always have purple orchids on hand,” she said. “Years ago, we always had orchids for corsages. But today people don’t use corsages as much. Now, we specially order them. I would ask our supplier for two purple orchids. The supplier asked why because no one wears corsages anymore. I told him it was for the Blessed Virgin and he would give us two of his best, biggest orchids.”

As the pastors changed, Mulry said, she always made sure to tell them about the mysterious flower request “so they would know why it just showed up” each Saturday before Mother’s Day.

There was one point about 30 years ago when the letter hadn’t arrived by the Friday before Mother’s Day, she recalled. “My mother said, ‘It’s not going to come.’ But on Saturday, we got a special delivery letter with the request and a check.”

There will be flowers again this year. The letter arrived May 1. “I went down to the greenhouse and they told me it came,” Mulry said. “I couldn’t believe it. It was completely different — on different paper. It looks like it was written by a younger person, so this could go on for years.”

But there is still no indication about who the anonymous donor is.

“This is kind of unreal,” said Gene Janssen, a longtime parishioner and parish historian who enjoys the mystery of Mary’s flowers. He also is curious about the identity of Mary’s devoted admirer, but he has no idea whom it might be.

In the meantime, he will enjoy the beautiful May flowers at Mary’s feet this year and hopefully for many years to come.

Peerenboom writes for The Compass, newspaper of the Diocese of Green Bay.

NEXT: Convocation delegate said becoming Catholic was something he ‘had to do’