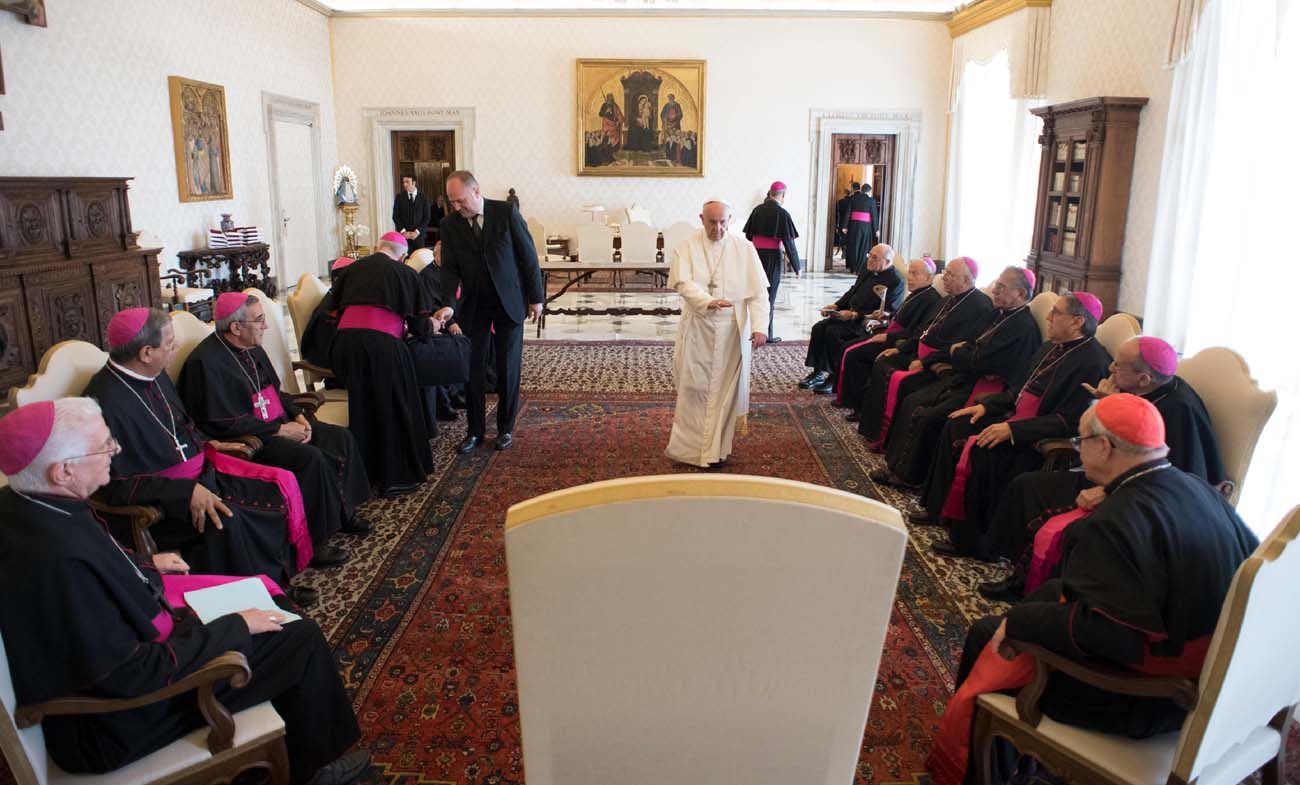 Pope Francis arrives for a meeting with Cuban bishops during their "ad lumina" visit to the Vatican May 4. (CNS photo/L'Osservatore Romano)

ROME (CNS) — Having a group meeting with Pope Francis was not like attending a lecture, but it was a moment of communion and sharing among friends and shepherds, a Cuban archbishop said.

“When people call it an audience, it sounds like we’re there only to listen, but this was a sharing among shepherds; a meeting of bishops — the apostles that are in Cuba — and Peter,” Archbishop Dionisio Garcia Ibanez of Santiago, president of the Cuban bishops’ conference, told Catholic News Service May 4.

Pope Francis met with the 13 prelates from the Caribbean island-nation earlier that day during the “ad limina” visit that bishops are required to make to the Vatican.

Archbishop Garcia said the pope listened intently as well as offered advice on the challenges facing the nearly 6 million Catholics in Cuba.

Although the problems “are common in many churches,” Archbishop Garcia said, they “manifest in Cuba in a unique way.”

“It is a poor church and we need material help. But more than anything, we need missionaries, we need priests, religious men and women. The number of missionaries does not reach the demand of people who come to the church and the evangelization efforts we have,” he said.

While the government has granted greater religious freedoms to the Catholic Church, Archbishop Garcia told CNS that the lack of money has made it difficult to “build new churches in so many places where we have started to preach the faith.”

The church, however, continues to stay strong and is encouraged by the support by the pope, he added.

“We know and we feel the appreciation of the Holy See for Cuba and we thanked (Pope Francis) for that. We told him about the situation of our church, which is a very fragile and poor church in many things, but one that is also creative and enthusiastic about evangelizing. He listened to us and gave us advice; it was a conversation among shepherds,” Archbishop Garcia told CNS.

He also said that Catholics in Cuba are “very grateful” for the affection shown to them, particularly throughout the past three pontificates.

The closeness of the universal church to the people of Cuba began with St. John Paul II’s historic visit in 1998, the first visit of a pope to the country.

“Pope John Paul II was an imposing person; imposing not only in how he presented himself but also because of his personal history. He was a man who lived through totalitarianism and who went out to fight for his church,” the archbishop said.

And, Archbishop Garcia said, when St. John Paul visited Cuba, “his old age and physical weakness made him even more lovable because of his frailty and the power of his voice and thought.”

Pope Benedict XVI visited Cuba in 2012. Recalling the retired pope’s “methodical and studious” personality, Archbishop Garcia said that although he had shown signs of frailty, “he had a very powerful way of thinking.”

“Pope Benedict spent two days in Cuba whereas Pope John Paul II spent five days. Yet in only two days, he conquered the hearts of the people,” the archbishop said.

However, he continued, Pope Francis stands out since “out of all three, he was the one that was known before” he became pope.

As archbishop of Buenos Aires, Argentina, then-Cardinal Jorge Mario Bergoglio headed the drafting committee for the final document of the Fifth General Conference of the Bishops of Latin America and the Caribbean in 2007 in Aparecida, Brazil.

The document’s call to renew the church’s commitment to mission and discipleship in Latin America, particularly reaching out to those far from the church, resonated in areas where the church was in decline or just beginning to flourish, Archbishop Garcia said.

The Cuban people love Pope Francis’ “Latin American personality” and his way of “transmitting the Gospel in a very Latin American style,” the archbishop said.

Each of the three popes, “according to their own personality, according to the historical moment, have left their mark which is to bring us the Gospel,” Archbishop Garcia told CNS.