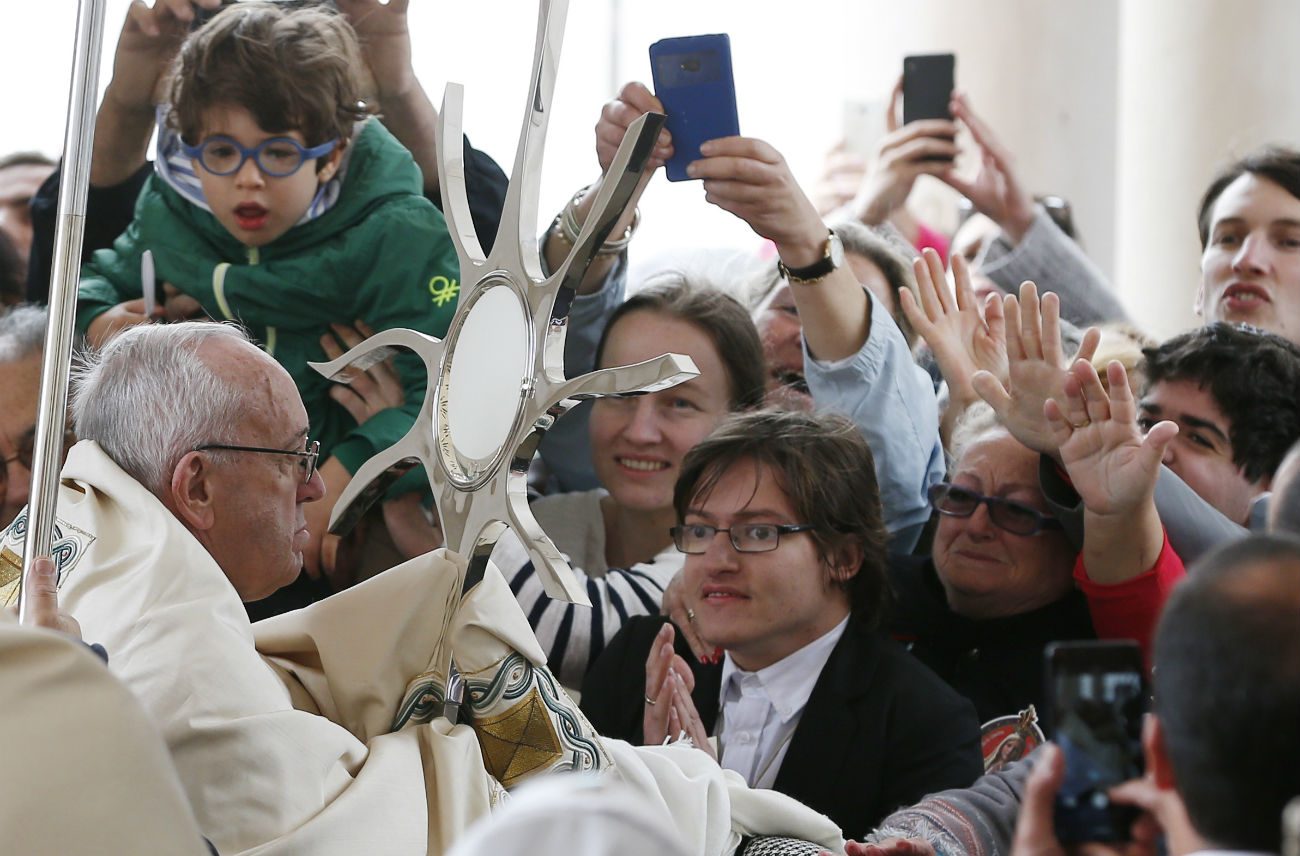 Pope Francis blesses the sick with the Eucharist at the conclusion of the canonization Mass of Sts. Francisco and Jacinta Marto, two of the three Fatima seers, at the Shrine of Our Lady of Fatima in Portugal May 13. The Mass marked the 100th anniversary of the Fatima Marian apparitions, which began on May 13, 1917. (CNS photo/Paul Haring)

FATIMA, Portugal (CNS) — Standing before the Basilica of Our Lady of the Rosary, Pope Francis canonized two shepherd children who saw Mary at Fatima, but more importantly, he said, they heeded the call to pray for sinners and trust in the Lord.

“We declare and define Blessed Francisco Marto and Blessed Jacinta Marto as saints,” the pope said May 13 as hundreds of thousands of pilgrims broke out in applause before he finished speaking.

The relics of the young shepherd children, encased in two thin golden crosses, were placed in front of the famed statue of Our Lady of Fatima, the “lady dressed in white” as the siblings and their cousin described her.

The Marian apparitions began May 13, 1917, when 9-year-old Francisco and 7-year-old Jacinta, along with their 10-year-old cousin Lucia dos Santos, reported seeing the Virgin Mary. The apparitions continued once a month until Oct. 13, 1917, and later were declared worthy of belief by the Catholic Church. 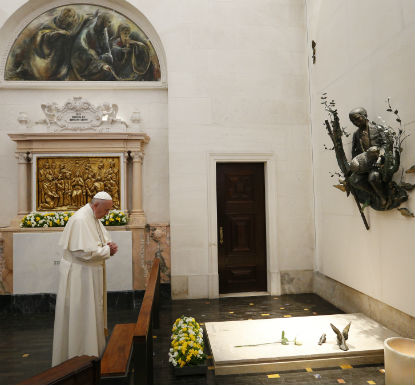 Pope Francis prays at the tomb of Fatima seer Francisco Marto before celebrating the canonization Mass for him and his sister, Jacinta Marto, at the Shrine of Our Lady of Fatima in Portugal, May 13. (CNS photo/Paul Haring)

The children, beatified by St. John Paul II in 2000, are now the youngest non-martyrs to be declared saints by the Catholic Church.

Before his arrival at the shrine, the pope met privately with Portuguese Prime Minster Antonio Costa and then made his way into the sanctuary that houses the tombs of Sts. Francisco and Jacinta and their cousin Lucia, who died in 2005 at the age of 97. The diocesan phase of her sainthood cause concluded in February and now is under study at the Vatican.

Pope Francis stood for several minutes in front of the tombs with his eyes closed and head bowed.

In his homily at the canonization Mass, the pope reflected on the brief lives of the young sibling saints, who are often remembered more for the apparitions rather than for their holy lives.

But it is Mary’s message and example, rather than an apparition, is important, he told the crowd, which Portuguese authorities estimated at about 500,000 people.

“The Virgin Mother did not come here so that we could see her. We will have all eternity for that, provided, of course, that we go to heaven,” the pope said.

Instead, he continued, Mary’s messages to the young children were a warning to all people about leading “a way of life that is godless and indeed profanes God in his creatures.”

“Such a life — frequently proposed and imposed — risks leading to hell. Mary came to remind us that God’s light dwells within us and protects us,” the pope said. 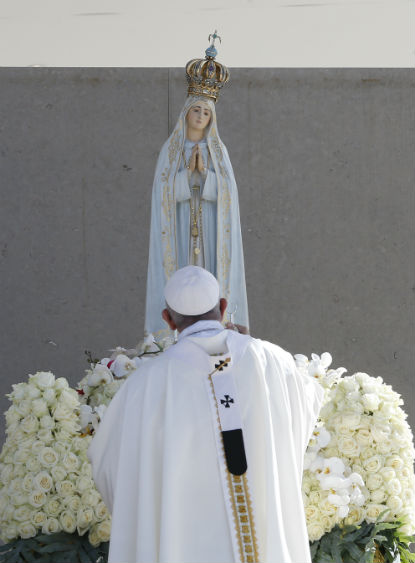 The hopeful message of Fatima, he said, is that men and women have a mother and like children clinging to her, “we live in the hope that rests on Jesus.”

Pope Francis called on the pilgrims to follow the example of heroic virtue lived by St. Francisco and St. Jacinta, particularly their insistent prayer for sinners and their adoration of “the hidden Jesus” in the tabernacle.

This continual presence of God taught to them by Mary, he said, “was the source of their strength in overcoming opposition and suffering.”

By following their example, the pope said, Christians can become “a source of hope for others” and counter “the indifference that chills the heart” and “worsens our myopia.”

“We do not want to be a stillborn hope! Life can survive only because of the generosity of other lives,” he said.

It is with the light of hope, the pope added, that the church can radiate “the true face of Jesus” and reach out to those in need.

“Thus, may we rediscover the young and beautiful face of the church, which shines forth when she is missionary, welcoming, free, faithful, poor in means and rich in love,” he said.

Addressing the sick before concluding the Mass, Pope Francis said that Christ understands the “meaning of sorrow and pain” and, through the church, offers comfort to the afflicted just as it did for Sts. Francisco and Jacinta in their final moments.

The “hidden Jesus” the young shepherds adored in the Eucharist is also present “in the wounds of our brothers and sisters” where Christians can adore, seek and recognize Christ.

Pope Francis encouraged the sick present at Mass to “live their lives as a gift” and to not think of themselves simply “as the recipients of charitable solidarity” but rather “a spiritual resource, an asset to every Christian community.”

“Do not be ashamed of being a precious treasure of the church,” he said. 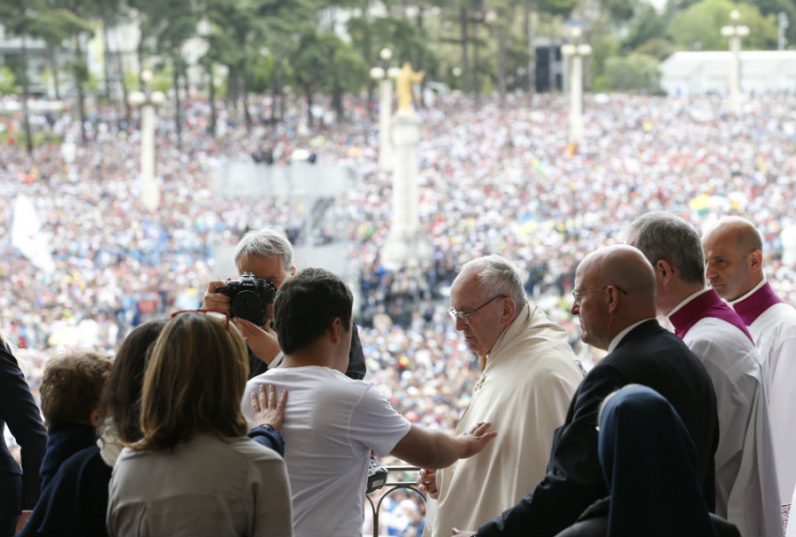 A man reaches to touch Pope Francis after the pope blessed the sick with the Eucharist at the conclusion of the canonization Mass of Sts. Francisco and Jacinta Marto, two of the three Fatima seers, at the Shrine of Our Lady of Fatima in Portugal May 13. The Mass marked the 100th anniversary of the Fatima Marian apparitions, which began on May 13, 1917. (CNS photo/Paul Haring)