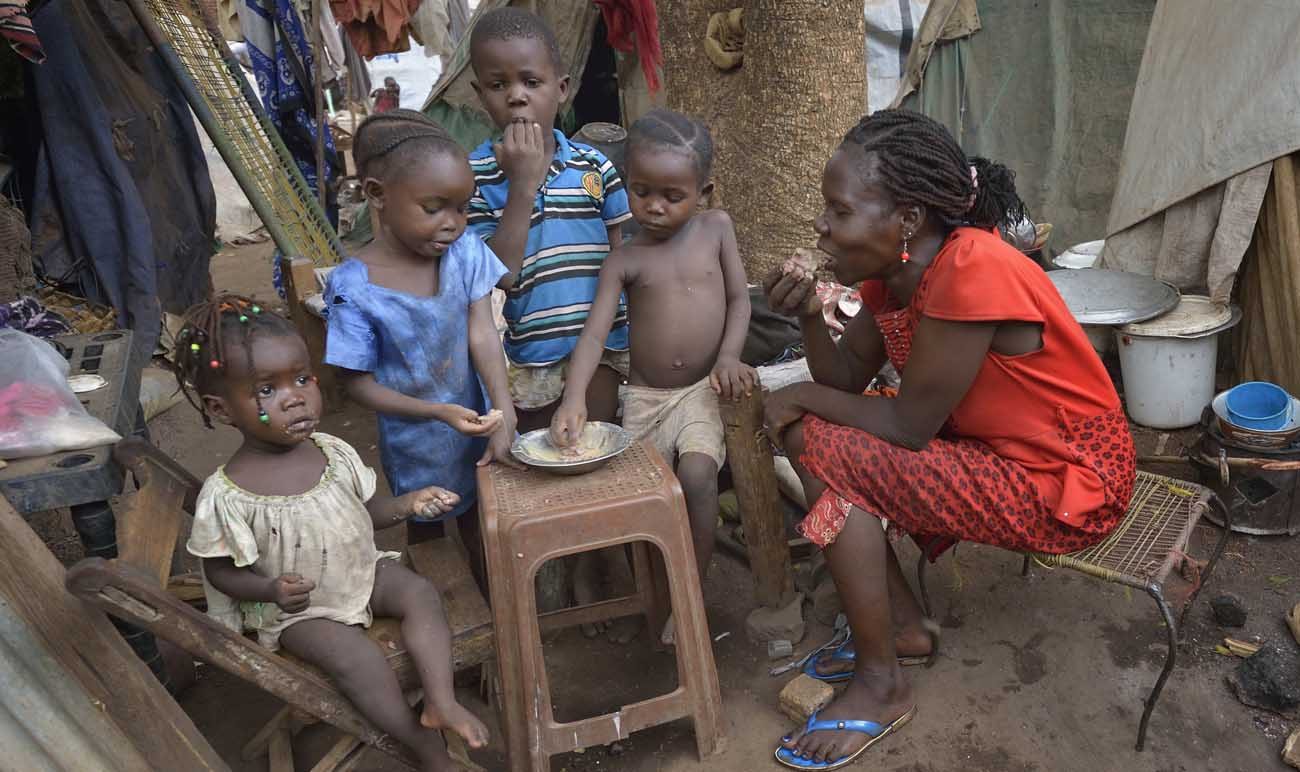 A mother and her children eat a meal at a camp for internally displaced persons on the grounds of St. Mary Catholic Cathedral April 24 in Wau, South Sudan. Drought and armed conflict have pushed tens of thousands of Wau-area residents out of their homes, away from their farms and unable to adequately feed themselves. (CNS photo/Paul Jeffrey)

WAU, South Sudan (CNS) — Rita Williams slept under a tree beside St. Mary Catholic Cathedral, her three hungry children beside her. Around them, as many as 16,000 other displaced people filled the cathedral compound, hoping the church would keep them safe as their country spirals into greater violence.

“I’ve been here two weeks, since the soldiers chased us out of our house and burned it,” she said April 26. “We have nothing, not even salt. Our clothes are dirty, and some days all we have to eat or drink is water. We’re waiting. I don’t know for what, but we’re afraid to go back home.”

When civil war ripped apart South Sudan’s fragile democracy in 2013, residents of this city in the country’s northwest watched the violence from afar, seemingly unconcerned that the politically manipulated ethnic violence would spread here. And then it did, and the victims ran for the city’s churches.

“It wasn’t safe anywhere, but people said that if they were going to be killed, they preferred to be killed in the church because this is the place that Jesus is present. They wanted to die in the church rather than die in their homes,” said Father Germano Bernardo, a priest in Wau.

Although tensions had been building for months, last June intense fighting broke out between soldiers of the Sudan People’s Liberation Army, who are mostly members of the dominant Dinka tribe, and a mixture of local opposition groups and members of other ethnic communities. On June 23, the violence spread into the center of Wau, where two members of the cathedral choir were killed.

“They were walking home in the evening after choir practice and were attacked by six soldiers, who shot them dead,” said Father Bernardo, who at the time served as vicar general of the diocese.

The next day, government soldiers started looting and burning houses belonging to the Fertit and other ethnic groups, and people rushed to the city’s churches and a nearby U.N. base, Father Bernardo told Catholic News Service. 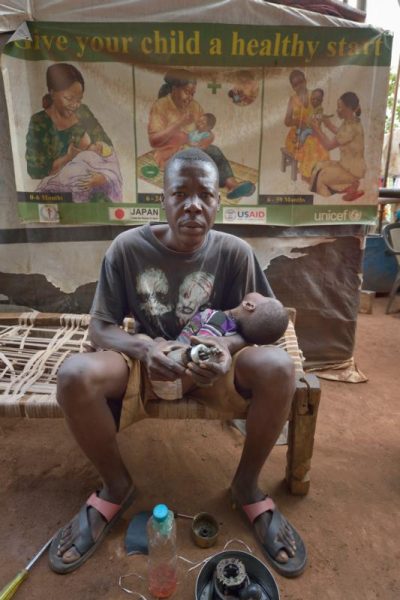 A man sits with his child at a camp for internally displaced persons on the grounds of St. Mary Catholic Cathedral April 25 in Wau, South Sudan. (CNS photo/Paul Jeffrey)

By June 25, he said, soldiers were driving around the city, “shooting people as they ran from their houses.”

One small child, age 1, was killed as he ran for the church, said Father Bernardo.

“There was no way to get to the cemetery, so we buried 14 people within the cathedral grounds,” he said. “From then until now, insecurity has reigned. So people stay in the churches. Many of their homes have been looted, and if they leave the town they’ll be killed.”

More than 400 people were killed and more than 120,000 displaced in the initial phase, leaving churches, aid groups and United Nations agencies scrambling to respond. The churches got help from Catholic Relief Services and other groups that provided shelter materials, hygiene kits, cooking pots and food. The church drilled two new wells to supplement two existing wells on the cathedral grounds, but that’s still not enough for the displaced who make the cathedral grounds their home, so Oxfam trucks water into the site every day.

Sporadic fighting around the city has continued since, with occasional incidents that push a new group of civilians out of their homes.

In January, for example, a group of government-affiliated cattle keepers attacked local farmers they believe are aligned with anti-government rebels, and thousands fled neighboring villages for the safety of Wau’s churches, including more than 5,000 who filled the grounds of an Anglican church.

In April, after two high-ranking army officers were killed in an ambush nearby, SPLA soldiers and Dinka militia members rampaged through Wau, murdering and robbing non-Dinkas. The United Nations said at least 16 people were killed; other local sources reported double that number. Some 8,000 more people were displaced, including Williams and 3,800 others who came to the already crowded Catholic cathedral grounds.

Facing widespread criticism for its actions in and around Wau, the government announced in April that it would pull back the SPLA from Wau and deploy national security agents, a force generally considered less repressive than the army. But many here remain skeptical.

“At this point, nobody can believe what the government says, because they say one thing and another thing happens. So people don’t want to go home. SPLA soldiers are still moving around in their uniforms and with their guns. The people are afraid,” Father Bernardo said.

Wau has long been a center of tension between pastoralists and crop farmers. Violence between the two groups led to the displacement of thousands in 1996, but most returned home within a few days. Yet the current crisis, like many local conflicts in the world’s newest nation, has been exacerbated by the broader political crisis centered in Juba, the national capital, where struggles for power in December 2013 launched the country into a bitter civil war. 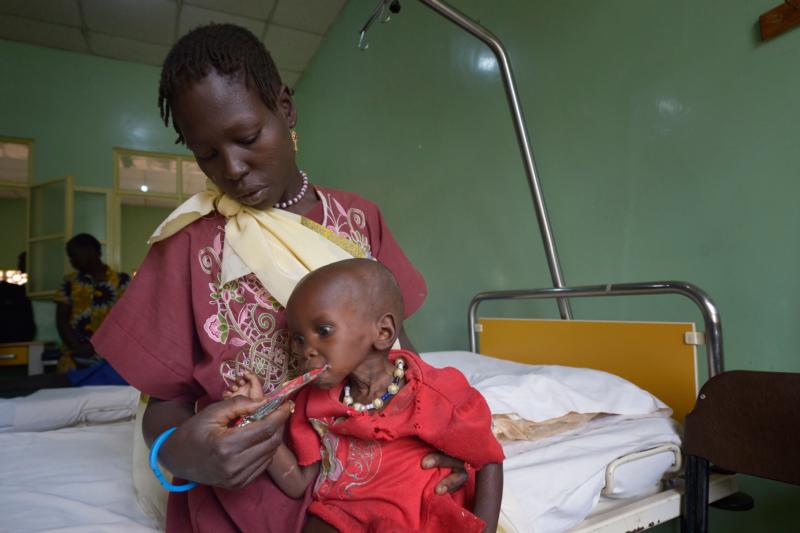 Catholic leaders, led by Bishop Rudolf Deng Majak, played a key role in mediating the 1996 crisis. Yet Bishop Deng, who died in Germany in March, had been sick for some time and living outside the country. The bishop kept in touch by phone with Father Bernardo throughout the crisis, yet Anne Masterson, the country representative of Norwegian Church Aid, said things might have been different had he been present.

“He had been the priest of some of these military commanders and knew everyone. So perhaps people felt a bit lost without him. His absence may have allowed some of the clan divisions to be manipulated for political purposes, something the bishop had worked all his life to prevent,” she said.

In Bishop Deng’s absence, the South Sudan Council of Churches, which includes the Catholic Church, mounted a local peace initiative. It pushed for face-to-face meetings among all parties, finally pulling together a three-day workshop of civil society leaders with government and military officials in December. Those in power made promises, which church leaders say they either did not keep, or local officials were replaced by people who had no interest in honoring the commitments of their predecessors.

“The army admitted that its soldiers had done some things wrong, and they said that from then on they wanted to be friends with the civilians. And the civilians said they were ready for a new phase,” Father Bernardo said. “The soldiers said that in order to build trust they would go out and clean up the town, and they would come talk with the civilians in the different displacement camps. But once the workshop was over, nothing happened. The government then said it would move all the soldiers seven kilometers away and only have police in the town. But again, nothing happened, up to now. If the government says something, the civilians won’t believe it.”

The Rev. Bang Akuei Nyuol, an Anglican who serves as regional director for the South Sudan Council of Churches, said government officials did try to mitigate the violence by mounting a campaign for civilians to turn in weapons. Yet the same day it convinced a group of cattle keepers to hand over their assault rifles, a large number of cattle were stolen from them. In the wake of the cattle raid, few listened to the government’s appeal to disarm.

And so the displaced wait.

“I’m a university graduate, but I’ve been sitting in this camp for almost a year,” said William George, a resident of the cathedral camp. “This morning I didn’t eat anything. Nor did my children. If I had $100, I’d leave for Egypt or somewhere else, anywhere other than here. My house was burned and all my things taken. There’s no future here because there’s no accountability. They can kill someone and there’s no response, no judgment.”

Father Moses Peter, the diocesan emergency coordinator, said the victims of the violence trust the clergy to protect them.

“Most felt when they came to the church that God was immediately going to look after them and keep them safe. And many felt that if people came to do violence, that we priests would challenge them,” he said.

“It’s true that sometimes we priests challenge people who are not acting correctly, but then people complain that we are attacking them in our homilies, or that we are against the government or siding with the rebels. There are a lot of dangerous accusations. When you tell the truth it’s made to seem like you are doing something wrong. When people feel that the word of God that you preach is touching them and they don’t want to change, then they accuse us of all sorts of things, and say we should be arrested.”

Father Peter said he has no time to worry about such threats, as he’s too busy managing the daily crises of the displaced. In late April he was waiting for food that had been promised by the U.N. World Food Program. He worried that the little bit of food that was available would produce more anger than satisfaction among the cathedral’s guests.

More than 30 million people need food assistance in Yemen, South Sudan, Nigeria and Somalia due to conflict and drought, but on April 28, the head of the World Food Program, David Beasley, said the U.N. only has enough money to help 8.4 million of them.