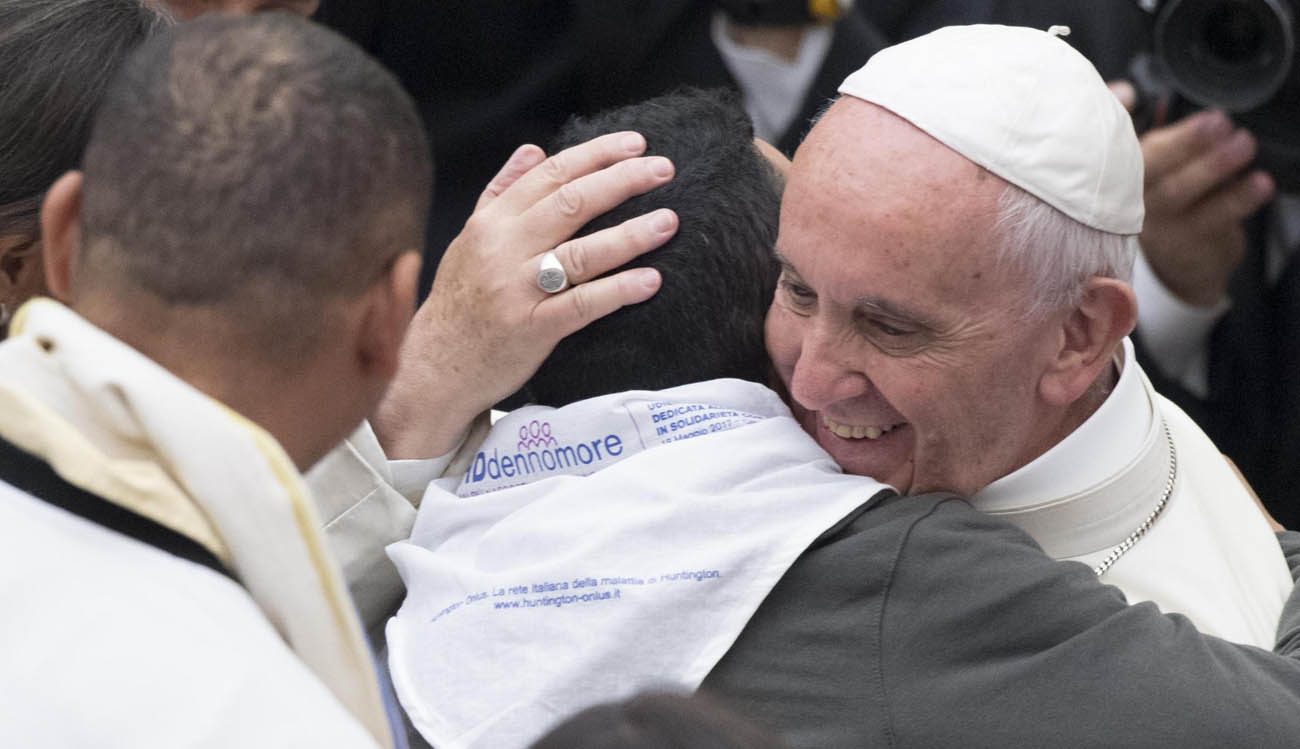 Pope Francis embraces a patient with Huntington's disease during the pontiff's general audience in St. Peter's Square at the Vatican May 17. (CNS photo/Claudio Peri, EPA)

VATICAN CITY (CNS) — The frailty associated with illnesses like Huntington’s disease is not a reason to shun the sick but a reminder of the value of life, Pope Francis said.

Jesus came to tear down the walls of stigma and marginalization and proved through his love that disease and sickness are “never an obstacle to encountering people,” the pope said May 18 during a meeting with 1,700 people — those with the fatal genetic disorder and their families.

“Fragility is not an evil. And disease, which is an expression of fragility, cannot and must not make us forget that, in the eyes of God, our value is always priceless,” he said.

The meeting was sponsored by HDdennomore (pronounced “Hidden no more”), a coalition of neuroscientists, research experts and institutes with the goal of “ending the stigma and shame around the disease.”

Huntington’s disease results in the death of brain cells and causes problems with a person’s mental abilities, body coordination and movement.

Since the disease’s discovery in 1872, the uncontrollable movements that characterize the disease have led to the marginalization of those afflicted.

Acknowledging the “shame, isolation and abandonment” faced by those with the disorder, the pope said that, for too long, people with Huntington’s disease have been met with “misunderstandings and barriers, truly excluding them.”

However, he added, the organizing coalition’s motto, “‘Hidden no more’ is not simply a slogan so much as a commitment that we all must foster,” and Huntington’s disease can become “an opportunity for encounter, for sharing, for solidarity.”

Pope Francis also encouraged the families who care for their loved ones “with self-sacrifice and steadfastness” to not give in to “the temptation of the sense of shame” and accompany their family members “on this difficult path” that can, at times, “be an uphill climb.”

“The family is the privileged place of life and dignity, and you can cooperate to build that network of solidarity and of help that the family alone can guarantee, and which the family is first called to live,” the pope said.

The work of doctors, health care workers and volunteers, he continued, gives “tangible shape to the hope and motivations” of patients and their families while also protecting the dignity of those entrusted to their care.

“You are like the hands that God uses to sow hope. You are the voices that these people have to claim their rights,” the pope said.

Pope Francis also thanked the work of scientists and geneticists who dedicate their lives to researching and studying Huntington’s disease.

He also urged them to pursue their goal of finding a cure without resorting to practices that fuel a “throwaway culture,” particularly through the use and destruction of human embryos.

“We know that no ends, even noble in themselves, such as a predicted utility for science, for other human beings or for society, can justify the destruction of human embryos,” he said.

After his speech, the pope spent nearly one hour individually greeting 150 Huntington’s disease patients seated in the front rows along with their families. Many of them were overcome with emotion as he laid his hand on their head or kissed their cheek.

Maria Esther, Franklin and Yosebly, three siblings from Venezuela who inherited the disease, wept as the pope blessed them and embraced them. According to HDdennomore, the siblings were often victims of “cruel stares” and “isolation” after their symptoms manifested.

Jesus’ closeness to the suffering, Pope Francis said in his speech, gave hope to the sick and the marginalized because “they felt they were listened to, respected and loved.”

PREVIOUS: Be open to God’s love, bring joy to others, pope says