Outside cities, Chinese grandparents pass on faith to their grandchildren 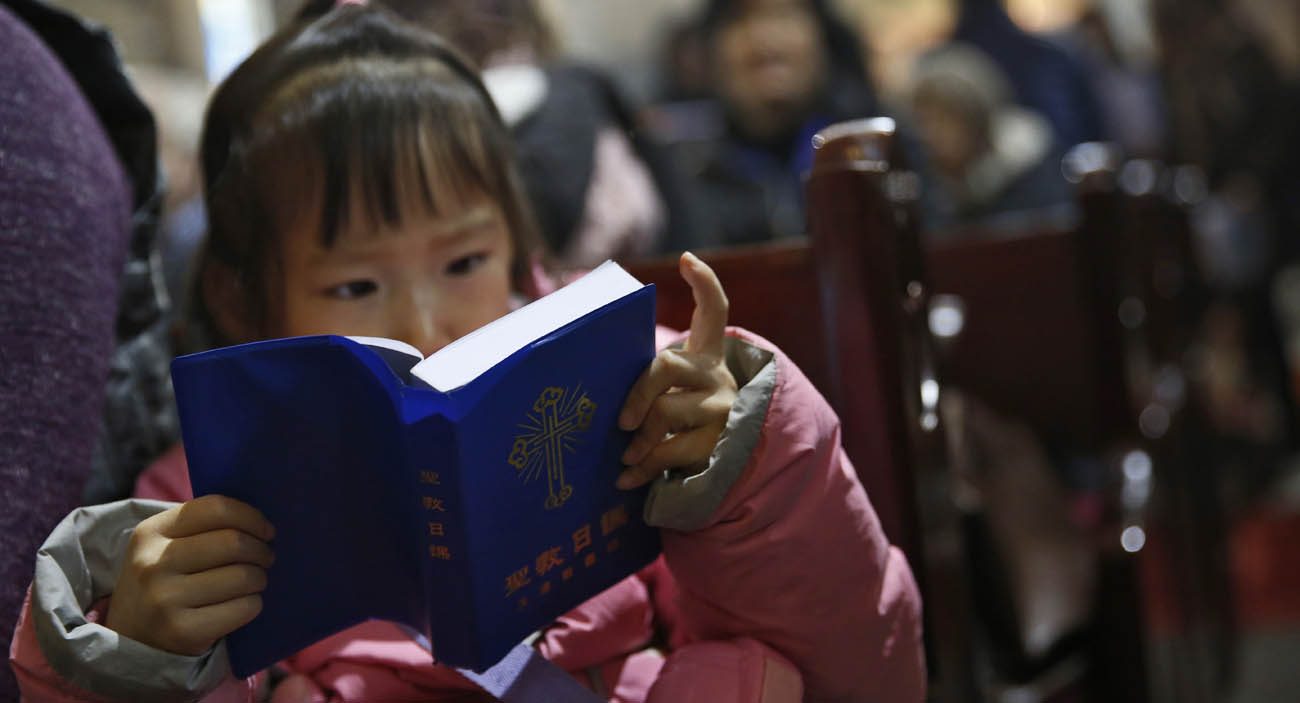 A girl looks at a Bible during Mass in 2016 at a Beijing cathedral. As young people move to cities, Catholic grandparents in rural areas are passing on the faith to their grandchildren. (CNS photo/How Hwee Young, EPA)

HONG KONG (CNS) — Every evening, no matter how busy or tired she may be, Yiu reads the Bible at home to her 7-year-old granddaughter. Sometimes, parishioners from Changzhi Diocese in north-central China’s Shanxi province, come and join her, reports ucanews.com.

Changzhi Diocese has 80 churches and 37 prayer houses for its 60,000 Catholics. Among them, only four are in cities, 18 are in suburban areas and the rest in rural zones.

Local people do not feel it is an exaggeration to tell visitors that one can find an old church in almost any village that has Catholics living there.

However, in the past two decades, young and middle-aged villagers have moved to find better opportunities in the cities. Their participation in church activities also shifted from the rural church to the city, reports ucanews.com.

Shanxi is one of the handful provinces in China with more than 200,000 Catholics. Numerous Catholic villages can be found in this rural area, where the faith has been passed down the generations since Franciscan missionaries introduced Catholicism in 1716.

Now, the province’s historic rural churches are mostly used by the elderly and children.

“Some younger Catholics participate in religious activities in the cities, but some are affected by secularization and stopped going to church. It is tough for them to maintain their faith, let alone pass it on to the next generation,” said Father Shen Xuezhong of St. Stephen’s Church.

“It is now the elderly who are the pillars of the church, who pass on the faith to their grandchildren,” said Father Shen.

The change has led some clergy to set new standards for the baptism of children. Father Shen, for example, will not baptize children who are brought for the ceremony by their grandparents. In one of the villages where Father Shen served, three toddlers were ready for baptism this Easter, but he administered the sacrament to only two of them.

“My minimal requirement is the parents should be present in the baptismal rite, but one pair did not appear, and only the grandparents brought the child in,” said the priest.

His requirement is supported by Joseph Li, a parishioner from St. Stephen’s Church. Li told ucanews.com that most infants of Catholic parents were baptized within a month or 100 days after birth.

“Parents only need to bring their child to the church and the priest will baptize the baby. If they refuse to come even for just one time, it means they have no sincerity. So then why do they want baptism for their children?” said Li.

“We have to grasp firmly the formation of the next generation to ensure the church can continue to develop,” Father Zhao said. His parish baptizes about 30 children each year.

Three hours away by car, in Taiyuan Diocese, based in the provincial capital of Shanxi where there are an estimated 80,000 Catholics, faith life at Our Lady of Sorrows Parish remains strong, even though there were no new baptisms this Easter.

“Grandparents take children to church every day after class for half an hour of prayer. It is their habit,” said Sister Chen of the Handmaid of the Holy Spirit congregation.

“Although the elderly may not be able to teach the grandchildren much doctrine and church teachings, they instill faith in a subtle way that helps consolidate the minds of the younger generation,” she said.

Besides passing on the faith to their own family, the elderly also evangelize in nearby villages.

“Our elderly parishioners evangelize through serving the needy in other villages where there are no Catholics,” said Wang Yana, a young student from Honggou Church in Taiyuan Diocese. “When the people whom they serve feel loved and cared for, they gradually accept the Catholic faith.”

However, Father Zhao said he would encourage his parishioners to participate in the evangelization program to learn the correct skills before reaching out.

Changzhi Diocese offers eight training courses each year. Each weekly course is attended by more than 100 parishioners who learn the Bible, catechism, liturgy, spirituality and others, Father Shen told ucanews.com.

On Easter, nearly 1,600 people were baptized in Shanxi, making it the province with the second-highest number of new Catholics after neighboring Hebei province, according to Hebei Faith Press.

NEXT: Papal celebration of Corpus Christi moves to Sunday