Pilgrimage to Fatima a time of prayer, encounter, pope says 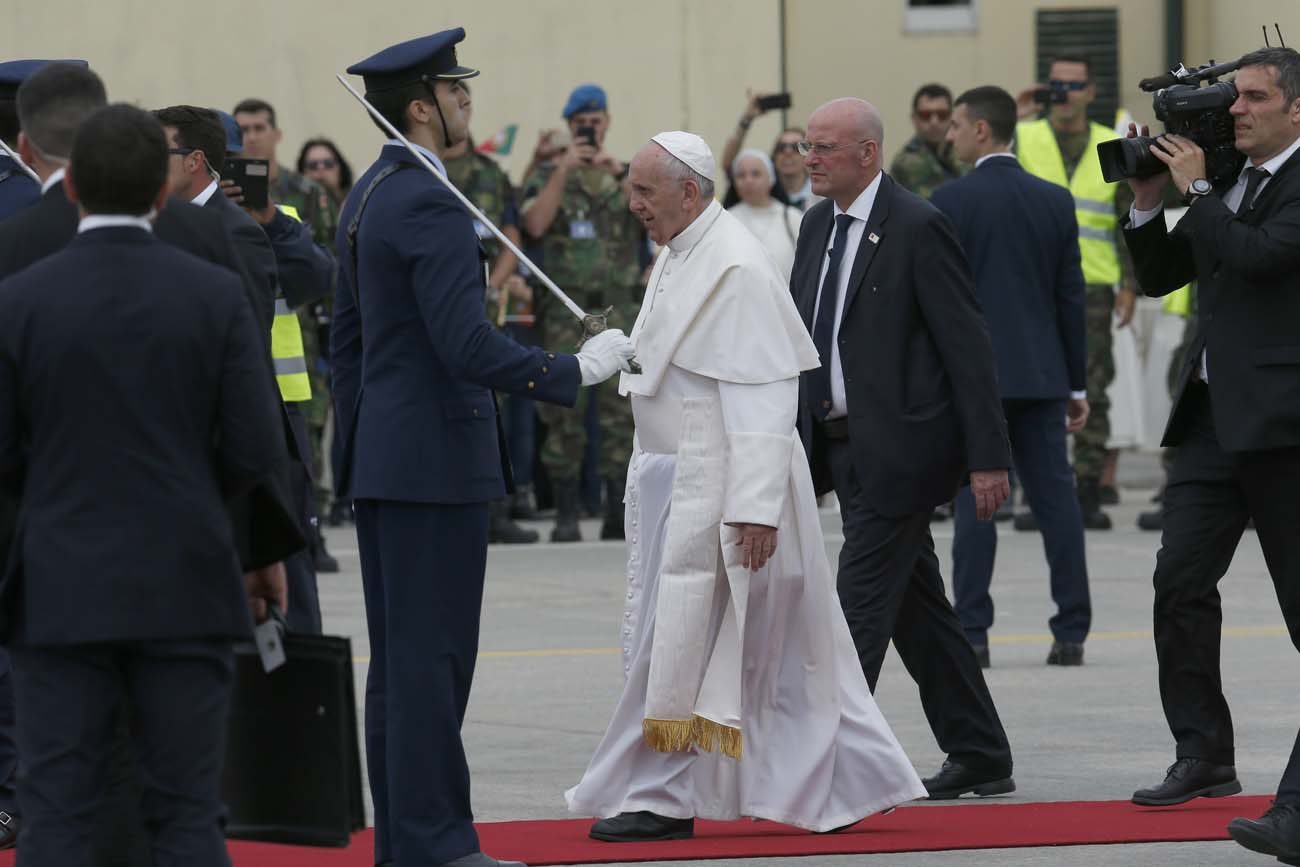 LEIRIA, Portugal (CNS) — Pope Francis said his two-day pilgrimage to Fatima would be a time of prayer and encounter with Jesus and Mary.

The visit to the Shrine of Our Lady of Fatima “is a bit special,” he told reporters aboard his flight from Rome May 12. “It is a journey of prayer, an encounter with the Lord and the holy Mother of God.”

After a three-hour flight, during which Pope Francis greeted each of the 69 journalists traveling with him, the papal plane landed at Monte Real air base, about 25 miles from Fatima.

The pope’s trip was planned for the celebration of the 100th anniversary of Mary’s apparitions to three shepherd children in Fatima.

On the actual anniversary, May 13, Pope Francis was to canonize two of the three young seers, Blessed Jacinta Marto and her brother Blessed Francisco Marto, making them the youngest non-martyred saints in the Catholic Church.

Arriving at the military base, the pope was welcomed by Portuguese President Marcelo Rebelo de Sousa and held a brief private meeting with him at the base. He also visited the base chapel and blessed sick members of military families.

Before leaving his residence at the Vatican that morning, the pope met with six women, who “had been through tough times,” said Greg Burke, Vatican spokesman. Two were pregnant and several were migrants. They all brought their children with them to meet the pope.

Cardinal Pietro Parolin, Vatican secretary of state and the pope’s closest collaborator, said Pope Francis’ visit would “express his own love and devotion to Mary” and his great respect for the Marian devotion of Catholics around the world.

In the apparitions of Our Lady of Fatima to the three shepherd children, Pope Francis sees an example of the Mary described by the Magnificat, the biblical hymn of praise for the great things God has done through her, Cardinal Parolin told L’Osservatore Romano, the Vatican newspaper.

At Fatima, “Our Lady of the Rosary appeared not to the rich or powerful, nor to people who were influential, but to children,” he said. The children were from simple families and were illiterate, “like the least of society or, to use the terminology of the pope, the ‘discarded’ of society. And Mary wanted to favor this category of people, giving the little shepherds a countercultural message.”

In 1917, World War I was raging and people and public discourse was filled with words of hatred, vengeance and hostility, the cardinal said. “Mary, on the other hand, spoke of love, forgiveness, self-sacrifice and giving oneself to others. It was a total reversal of all the values, or anti-values, that prevailed at that time.”

The two lessons Pope Francis draws from Fatima for the world today, he said, are the need to value the least of one’s brothers and sisters and the need “to live those authentic values that can be the basis for peaceful coexistence and solidarity within a nation and among countries.”

Bishop Antonio dos Santos Marto of Leiria-Fatima, also writing in the Vatican newspaper, said the Fatima message has touched so many people around the world for generations because it spoke and continues to speak about strengthening faith when the world around one is in turmoil.

The messages given by Our Lady of Fatima to the three children in 1917, the bishop said, spoke of “the two world wars and the suffering of humanity, with a specific mention of nations like Russia; the persecution of the church with the mention of the martyrs of the 20th century and of the pope himself; and of the great cause of peace among people.”

“All of that,” Bishop Marto said, “was accompanied by a very strong warning to not resign oneself to those situations as if they were normal” and not to give into a sense that evil will determine human destiny. “It is possible to defeat evil by starting with the conversion of hearts to God, prayer and reparation for sins.”

NEXT: Mexican archdiocese warns against veneration of ‘pseudo saint’