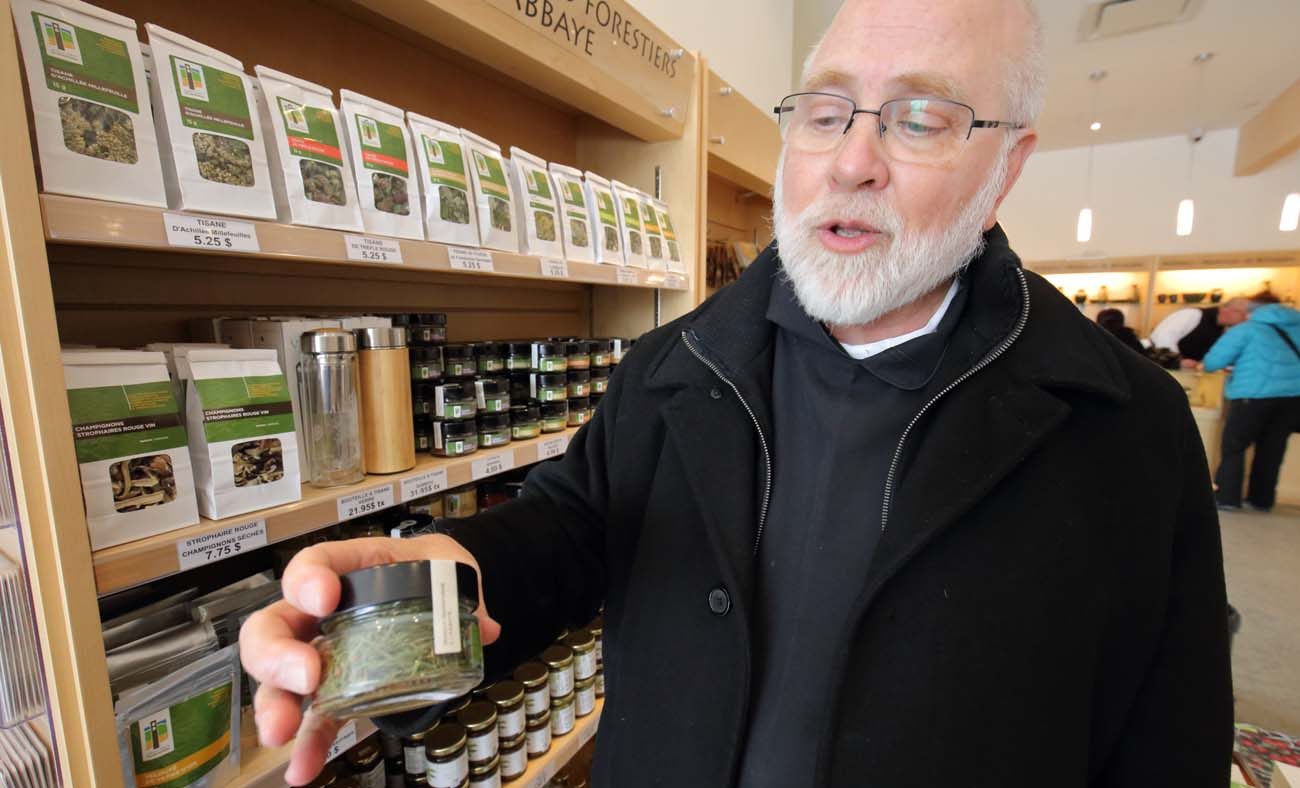 Abbot Andre Barbeau of Val Notre-Dame Cistercian abbey in Saint-Jean-de-Matha, Quebec, holds a jar of larch needles, used in salads and soups produced at the abbey and sold in its gift shop. (CNS photo/Philippe Vaillancourt, Presence)

SAINT-JEAN-DE-MATHA, Quebec (CNS) — When the Order of Cistercians of the Strict Observance left Oka, Quebec, to escape suburban sprawl, they left behind an oversized, aging building.

Their new Trappist abbey, nested in the forests and rolling hills of the Lanaudiere region and known for its cutting-edge ecological architecture, has been heralded as the 21st-century monastery. But, more importantly, it has become pivotal in the monks’ sweeping spiritual renewal.

“We wanted to reconnect with the monastic foundations of our way of life,” said Dom Andre Barbeau, Val Notre-Dame’s abbot. “Here, you can hear silence.”

“Monastic life has always had the same purpose: becoming new men by following Christ, who has made everything anew. Our monastic journey hasn’t really changed. But (moving here) allowed us to experience a re-foundation (of our spiritual life),” said the abbot.

Their new home embraces simplicity, with its straight lines. Inside, the smell of freshly cut wood perfumes every room, while the ecological approach is embodied in geothermal heating, triple glazing, water recovery and vegetated roofs. In the church, they chose to have the entire wall behind the altar in glass. While praying the holy offices, they contemplate the mountain, the trees and the animals. The communal spaces are designed to develop a sense of brotherhood, while making sure that each individual monk can find a personal balance.

“Solitude and communion are in balance. Silence and speech are in balance. There’s always a tension between two values, two poles. And one isn’t more desirable than the other,” said Dom Andre, as he is known.

The relationship between the abbey and its natural surroundings also cherishes this balance. The omnipresent, oversized windows give a feeling of permanent communion with the surrounding forest.

“That opening allows us to develop a different relationship with the Creator,” said Dom Andre.

Each monk contributes to the abbey. In the main hall, near the entrance, Brother Jean-Marc, who used to be the community’s cook, greets the visitor jokingly.

“Do you want to spend the rest of your life here?” he asks, a mischievous smile on his face. He seems heartened by the recent arrival of a new brother, a man in his mid-40s.

Down the hall, Brother Bernard puts the finishing touches on a few embroidered bags he has crafted, one of the numerous creative projects he works on. These items are designed for sale.

Moving here has made the Trappists rethink their relationship with their environment, as the community must earn its living from manual work. It’s no longer possible to take care of 3,000 apple trees or 2,500 sugar maples like they used to do in Oka. The monks have instead learned to tap the nurturing powers of the surrounding 187-acre forest.

Since 2014, they have transformed and commercialized edible forest products. With some of his fellow monks, Brother Bernard has discovered the riches of the abbey’s backwoods. At the monastery’s gift shop, one can find larch needles, marinated fiddleheads and products made from milkweed, next to the more usual chocolates and caramels. For the Val Notre-Dame monks, the forest holds a precious bounty. Occasionally, they even share a meal made entirely of ingredients harvested on their estate.

“We’ve learned to rely on the forest’s biodiversity, and to respect what is given to us (by the Creator),” said Dom Andre.

At the gift shop, Brother Emmanuel shows off local cheese and honey prepared by nearby producers, calling them signs of the community’s integration to the regional rural economy. In just eight years, the Trappists have become the main distributors of locally grown foods in Lanaudiere.

Pope Francis environmental encyclical, “Laudato Si’, on Care for Our Common Home,” struck a chord in the monks’ renewal process. In this new natural and human environment, the idea of a “common home” put forward by Pope Francis in his encyclical has a tangible meaning.

“We live in an era in which our institutions no longer meet the deepest human aspirations. Neither the family, nor the church (achieves that). The monks must thus find new ways to create a new society, a new community, a new brotherhood,” he said.