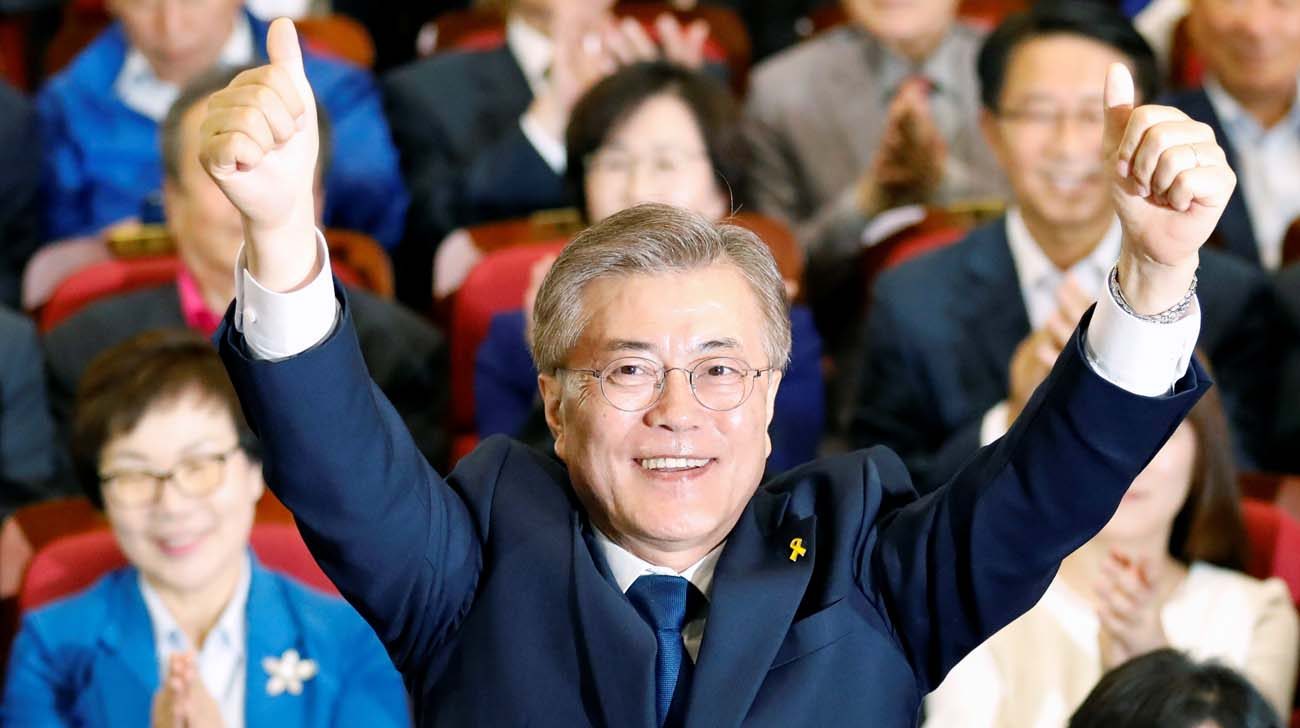 South Korean President-elect Moon Jae-in celebrates in Seoul after declaring victory May 9 in the South Korean presidential election. He was sworn in May 10. (CNS photo/Kim Hong-Ji, Reuters)

Catholics in South Korea have high expectations for unity, equality and an end to corruption under the country’s newly elected president, Moon Jae-in.

In a congratulatory message to Moon that also noted the national rift that led to the special election, the head of the Korean bishops’ conference, Archbishop Hyginus Kim Hee-joong of Gwangju, said the country needed “a credible leader who keeps principles and steps toward true peace and justice beyond today’s conflicts and confrontations.”

“May the new president be a great leader who can make democracy take root in this country and bring peace and prosperity to the Korean people,” Archbishop Kim said in his statement.

Moon, a Catholic and member of South Korea’s Democratic Party, won the May 9 election with 41 percent of the vote among a slate of 13 candidates. The son of North Korean immigrants had remained in the front-runner position since former President Park Geun-hye’s ouster in early March.

“I hope that the new president will lead this nation to be one where, in the spirit of the constitution, the vulnerable and disadvantaged in the society can be treated with human dignity and respect,” said Archbishop Kim.

Moon, 64, was buoyed by the growing dissatisfaction of ordinary citizens whose anger over corruption was years in the making under Park. From late 2016 to early 2017, tens of thousands of South Koreans filled the streets of Seoul every week calling for Park’s removal. A bitter division took root as the rallies were met with counterprotests in support of Park, whom investigators had linked to a corruption scandal that involved bribing top officials of major Korean corporations, including Samsung.

Park is accused to taking part in a bribery scheme with colluding top executives in exchange for policies that gave them majority control of their companies. Her longtime friend and associate, Choi Soon-sil, a private citizen whom investigators say was given access to state secrets, allegedly brokered the deals. Park, Choi and some executives, all currently detained and awaiting trial, have denied any wrongdoing.

Moon ran on a promise to see Park’s trial through, while the top conservative- and moderate-leaning candidates leaned toward pardoning her. He also declared he would be a “president for the people” who could reunite the country after the divisive protests. Moon is also widely seen as a South Korean leader who could bring better, less hardline relations with North Korea.

Franciscan Father Moses Kim Ildeuk of Hongcheon County, east of Seoul, said he thought “all friars … in Korea, with only a few exceptions, are enjoying this victorious result.” He described Moon as “a good Catholic” whom he expects to “clear up all the corruption that is deeply settled in all the public systems of Korean society.”

Father Kim, 42, told Catholic News Service that expectations are high for Moon to solve the problem of economic inequality, with a high number of unemployed yet highly educated young people and workers being exploited and underpaid at the expense of corporate gain.

Father Kim, who heads the Franciscan Academic Institute in Korea, said, “His promise for social justice and human dignity is quite clear from a Catholic and Franciscan perspective.”

Moon, a former human rights attorney, narrowly lost to Park in the 2012 elections. From 2003 to 2008, he was chief of staff to former President Roh Moo-hyun, whose administration sought more harmonious relations with the North. As a student in the 1970s he went to jail twice for protesting against then-dictator Park Chung-hee, the father of Park Geun-hye.

Simon Han, 27, a Jesuit pre-novitiate candidate and member of a Catholic young adult group in Seoul, said Moon had a lot of support from young Catholics. Han said he was “satisfied with the (election) result.”

“He’s a more liberal ruler and better suited for the presidency in terms of morality and Catholic faith,” said Han, who was a regular protester at the pro-impeachment rallies. “Moon took a leading position in impeaching former president Park, and people especially supported him for this cause.”

An official from the Korean bishops’ general secretariat told CNS the church expects Moon and his new administration to remain true to his words in his victory speech in which he said he would “communicate with people at all times. I will yield the president’s imperial power to people as much as possible … We should leave behind the heated competition, hold hands and move forward.”

NEXT: Text of Pope Francis’ prayer at site of Fatima apparitions