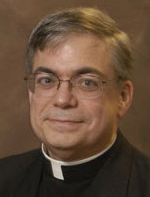 WASHINGTON (CNS) — Pope Francis has named Msgr. Alfred A. Schlert, administrator of the Diocese of Allentown, Pennsylvania, as the diocese’s new bishop.

The appointment was announced in Washington June 27 by Archbishop Christophe Pierre, apostolic nuncio to the United States.

Bishop-designate Schlert’s ordination and installation Mass will be celebrated Aug. 31 at the Cathedral of St. Catharine of Siena in Allentown.

“This appointment elicits in me a great realization of my own inadequacies, but with equally great gratitude to Almighty God for the grace and strength he gives,” he said at a news conference the day of his appointment. “I will do my best to fulfill the responsibilities that the Holy Spirit through the Holy Father has placed upon me.”

Bishop-designate Schlert said each of his predecessors has strengthened the diocese “by their vision and their apostolic ministry” and he will dedicate himself “to building on what they have done,” especially fostering vocations to the priesthood and the religious life. He invited his brother priests to help him “create a culture of vocations” in the Allentown Diocese, with assistance from the deacons, women and men religious, parents, teachers, catechists and coaches.

He told the youth and young adults of the diocese that they have “a very special place in the life of the church.”

“We need your enthusiasm, your honesty and your witness to Christ to prepare our diocese for the future,” he said. “Your youthfulness and hope make you ready to embrace a life of holiness and authentic living that only the church can offer.”

Bishop-designate Schlert said he looked forward to hearing from the diocese’s young people and working with them “in refreshing our diocese with your active participation in our parishes, our opportunities for spiritual growth, and projects of Christian service.”

Bishop Barres said in a statement that his successor “has a blend of holiness, intelligence and pastoral experience that will serve the mission of the Catholic Church in the Diocese of Allentown in an extraordinary way. His seminary education in Rome gave him a global perspective on the church to this beloved son of the Lehigh Valley.”

He described the newly named bishop as “a loving pastor with an insightful and compassionate pastoral charity and a nonstop new evangelization missionary spirit.”

“He is humble and down to earth and has this incredibly creative sense of humor that is charitable and puts everyone around him at ease,” Bishop Barres. “He is calm and steady but passionate about Father, Son and Holy Spirit and the Catholic Church’s mission of mercy in the world.”

Bishop-designate Schlert is a native of Easton, Pennsylvania, born July 24, 1961, just six months after the Diocese of Allentown was formed. He was educated at Catholic elementary and high schools in Easton.

He studied for the priesthood at St. Charles Borromeo Seminary near Philadelphia and the Pontifical Roman Seminary and Pontifical Lateran University in Rome, earning a licentiate in canon law.

After ordination, his ministry included assignments as assistant pastor at St. Francis of Assisi Church in Allentown; professor at Notre Dame High School in Easton, his alma mater; and Catholic chaplain at Lehigh University in Bethlehem, Pennsylvania.

He was named vice chancellor and secretary to the bishop in 1997; and was named vicar general of the Allentown Diocese of Allentown in 1998. While vicar general, he was pastor of St. Theresa of the Child Jesus Church in Hellertown from 2008 to 2010, when he resumed full time service as vicar general.

In addition, he is vice president of the Pennsylvania Catholic Conference and is a member of its administrative board. He also served on the diocesan priests’ council, the finance council and the College of Consultors.

In a statement issued June 27, Philadelphia Archbishop Charles Chaput called the appointment of Bishop-elect Schlert “a moment of joy for the Church in Pennsylvania and I’m confident he will carry on the work of his predecessors with compassion, zeal, and fidelity.”

“Bishop-elect Schlert has an intuitive sense of life in our commonwealth, the challenges facing the Church here, and the importance of the people and institutions of Northeastern Pennsylvania,” the archbishop said. “His wide ranging pastoral and administrative experience as a parish priest, Catholic educator and vicar general in the Diocese of Allentown will serve him well in the office of bishop. The Holy Father has given a true gift to all those Bishop-elect Schlert will shepherd.

“As he prepares to begin his episcopal ministry, I offer Bishop-elect Schlert heartfelt congratulations on behalf of the priests, deacons, religious and lay faithful of the Archdiocese of Philadelphia. I ask that people of good will across the state welcome him as a brother and pray that the Holy Spirit will strengthen him as a successor to the Apostles.”

At the news conference, Bishop-designate Schlert shared “a simple mission statement of faith” he said he penned when he became pastor in Hellertown and one that has been read before each Sunday Mass ever since.

“It goes like this: ‘A Roman Catholic family of faith, centered in the holy Eucharist, faithful to the church’s teachings, bringing the light of Christ to each other and to our community,'” he said.

“I will seek each day to fulfill these words in my ministry to the people of the Diocese of Allentown,” he added, inviting all in the diocese “to join me daily in performing this holy work.”

NEXT: Conference fetes 25 years of ‘owner’s manual’ for Catholics