Archbishop Charles Chaput addresses the 500 participants at the day-long conference Tradition, June 19 in Philadelphia marking the 25th anniversary of the publication of the “Catechism of the Catholic Church.” (Sarah Webb)

Generations of American Catholics learned all about their faith through the old “Baltimore Catechism” and its simple, question-and-answer format.

A new approach with an innovative, thematic format came along 25 years ago with the “Catechism of the Catholic Church,” and ever since, religious and lay catechists worldwide have relied on it to convey the teachings of the church.

About 500 people, mostly religious educators in the Archdiocese of Philadelphia and including Archbishop Charles Chaput and his auxiliary bishops, filled a center city Philadelphia hotel ballroom June 19 for a conference marking the anniversary of the document.

Titled “Tradition,” the day-long conference sponsored by the archdiocesan Office for Catechetical Formation drew Catholic scholars and other presenters to unpack the 2,865 tenets organized into four major “pillars,” or subject themes, that make up the catechism.

All the individual passages are referenced to copious citations in sacred Scripture and the writings of saints and Catholic thinkers through the ages.

The conference offered five Catholic speakers addressing aspects of the cathechism’s four pillars: “The Profession of Faith” with Matthew Bunson; “The Celebration of the Christian Mystery” with Scott Hahn; “Life in Christ” in two afternoon sessions with Deborah Savage and Jonathan Reyes; and “Christian Prayer” with Mother Assumpta Long and a panel of her Michigan-based Dominican Sisters of Mary, Mother of the Eucharist. 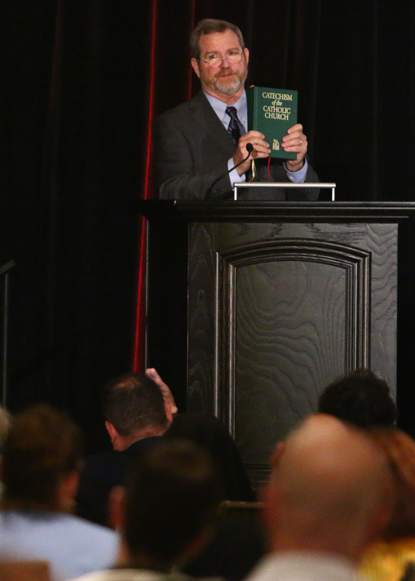 The structure of the catechism, according to keynote speaker Jeff Cavins, is what makes it such an effective teaching tool.

Because the church is a “living family” and an “outgrowth of the original seed that Christ planted,” the catechism reflects this dynamism in its “organic and systematic presentation of the faith,” Cavins said. “The cathechism imparts the wisdom of God and initiates us into the life of the Blessed Trinity.”

Cavins said Catholics may rely only on their childhood Catholic education, which may leave them with nothing more than a “pile of Catholicism” and without a deep understanding of the faith or the ability to explain it.

From that pile, “you can’t pull out what you need, you don’t know how to organize your faith or explain it,” Cavins said. “The catechism takes that pile and breaks it into amazing order” through four “smaller piles,” an innovation that Cavins attributed to the work of then-Cardinal Joseph Ratzinger, now the retired Pope Benedict XVI.

The catechism’s pillars are based on the formula of the earliest Christians described in Acts 2:42, in which the disciples of Christ “devoted themselves to the teaching of the apostles and to the communal life, to the breaking of the bread and to the prayers.”

“As the church devoted itself to those things, it exploded” in growth, Cavins said.

Thus the “teaching of the apostles” is covered in the first pillar through the 12 articles of faith proclaimed in the Nicene Creed; the “communal life” in the second pillar’s examination of the seven sacraments; the “breaking of the bread” in the third pillar’s presentation of the 10 commandments in the Old Testament and eight beatitudes in the New Testament; and the seven petitions of prayer in the Our Father covered in the fourth pillar.

“The way it is organized is genius; it’s brilliant,” Cavins said. 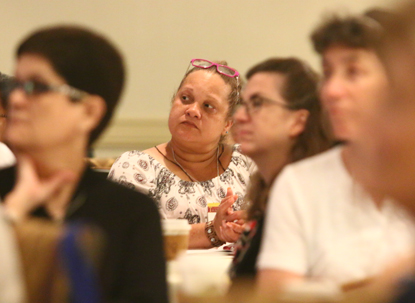 He used the example of young people receiving the sacrament of confirmation as an example of Catholics who may understand the sacrament but are not excited about it. The cathechism’s presentations of the sacraments, how to walk with Christ through life and in prayer, can help reestablish one’s ongoing relationship with God.

“We have exchanged the dynamic following of Jesus for gathering information about him. It’s not enough to know and understand, but to walk in Christ,” Cavins said.

Young people “have a story, a purpose in life. They’re called to be Christ in the world,” he said. “We should remind people we’re the body of Christ, doing his work. We are called to be like him in this beautiful family of the church.”

While calling the catechism “a strategic plan to get to heaven,” Cavins said understanding it is not enough.

“Just because you’ve got a catechism, it doesn’t mean you’re a disciple (of Jesus),” he said. “You’ve got to practice it.” 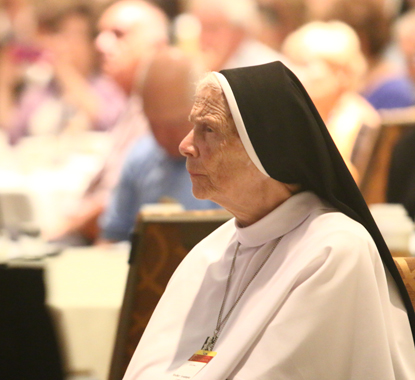 Mother Assumpta Long, who led a panel of her Michigan-based Dominican Sisters of Mary, Mother of the Eucharist in a discussion on the catechism’s “Christian Prayer” pillar at the conference, listens to a speaker. (Sarah Webb)

His message resonated with attendee Devin Sweeney, a teacher at St. Joseph the Protector School in Glenside. Her work as a middle school math teacher – she’ll also teach religion during her daily homeroom period beginning this fall — is “not just about teaching and giving them that ‘pile of Catholicism.’ You have to be a witness and show them how (the faith) comes through you, too,” she said.

It’s not only important for Sweeney to model the practice of the faith and being ready to talk about it at school, but at home as well, for her young son and daughter.

Sweeney credited her online studies of the catechism through the Catechetical Institute at St. Charles Borromeo Seminary’s School of Theological Studies.

Bryan Charnock, a Catholic convert and member of the RCIA preparation team at his parish, Corpus Christi in Lansdale, sees the catechism as “the Catholic faith owner’s manual.”

He calls it “the go-to guide when you have a question or can’t answer (someone’s question) and you just want to find out the answer for yourself or for others.”

“Look up it up in the catechism,” he advises, “because it will also cross reference to Scripture that backs it up where you can learn more.

“It’s such a fundamental resource if you’re a practicing Catholic,” Charnock said. “It’s something that I use to help live my faith. I have a lot of books that I’ve accumulated but it’s really just two books I keep on my desk all the time — they don’t get any dust on them — it’s the catechism and the Bible.” 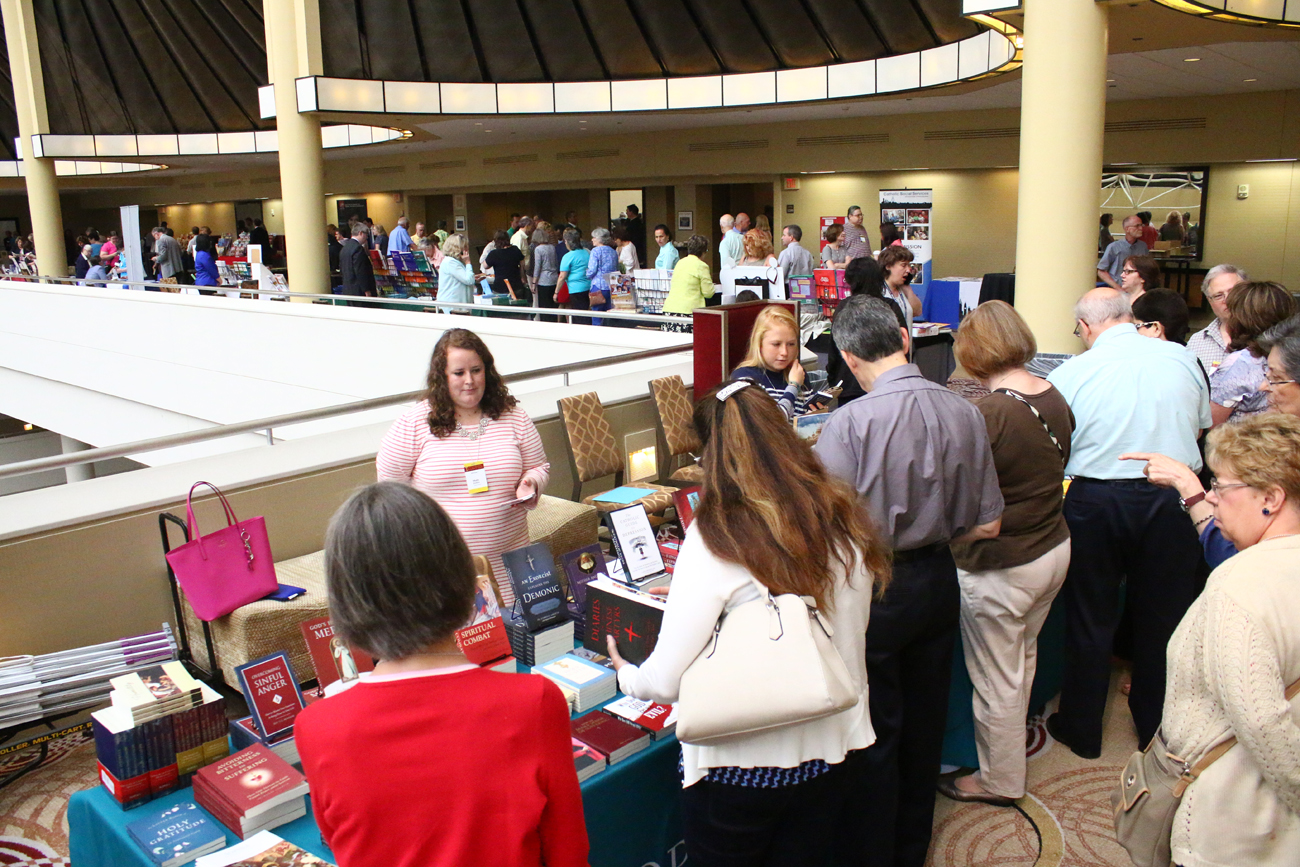