In model of Jesus, new deacons come to serve the church 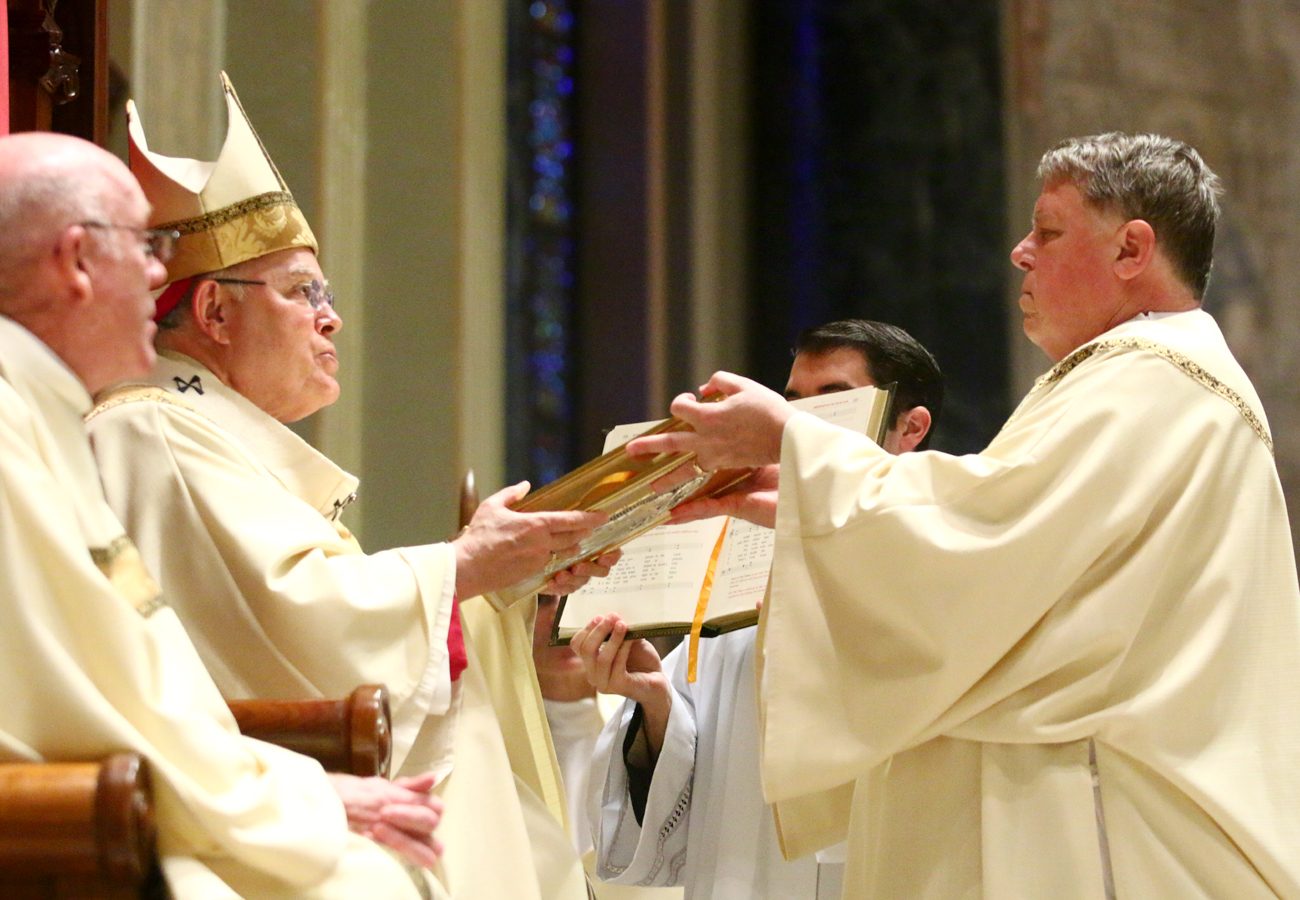 Philadelphia’s Cathedral Basilica of SS. Peter and Paul was packed on Saturday, June 10 with family, friends and deacons and priests for the ordination of 12 new permanent deacons for service in the Archdiocese of Philadelphia.

In his homily Archbishop Charles Chaput focused not on the designation of Stephen and his companions as the first Christian deacons but on the order of those dedicated to God’s serviced as described in Numbers 3:5-9.

Moses was a descendent of Levi, one of the sons of Jacob. Aaron, the brother of Moses, by God’s command was chosen as high priest. His sons were the priests of the community and the other men of the tribe of Levi were charged with assisting the high priest and the priests.

“The Levites are closely associated with our understanding of the role of deacon in the church,” Archbishop Chaput said. “The sacrament of Holy Orders is divided in three parts. Some are chosen as bishops, high priests from the community like myself. Other are chosen as priests, the pastors of the various parishes. And others are chosen as deacons to assist the bishop and the priests.”

Although the deacons are like the Levites of old and have a ministry of service, they are really following the example of the Lord.

“You are called to serve after the model of Jesus who came not to be served but to serve,” Archbishop Chaput said.

(Read our Profile story on one of the deacons who received a life-saving kidney transplant from another candidate in the deacon formation program, who also proclaimed a reading at the ordination Mass.) 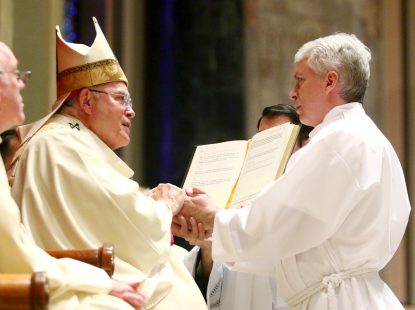 Christopher C. Roberts makes the promise of the elect during his ordination to the permanent diaconate.

The only Philadelphia resident, Deacon Christopher J. Roberts, a member of Our Mother of Consolation Parish in the Chestnut Hill section of the city, was assigned to Holy Martyrs Parish, Oreland. He is a board member and faculty member of the Martin Saints Classical High School scheduled to open in September at the former Holy Martyrs School.

The new deacons bring with them a wealth of experiences in various areas. For example Deacon Potter, a Bishop McDevitt High School graduate with an engineering degree from Penn State, is a retired U.S. Navy Commander who served in support of the Seabees in Kuwait during Operation Desert Storm and Operation Enduring Freedom in Iraq, and in the global war on terrorism.

He went on to be a senior project manager in civilian life and is married to his wife, Ellen Ann.

“I can’t pinpoint when I began thinking of the diaconate,” he said. “It was a long process but very grace-filled. My whole life has been in service starting in grade school and high school, and this is religious ministry in honor of Our Blessed Mother.”

Patrick Kennedy, a Northeast Catholic High School graduate, is a Vietnam War combat veteran who earned a Purple Heart. Many of his friends didn’t make it home, but he did and his civilian career began as a fireman. He and his wife, Dianne, had seven children including two who died.

The loss of the first child induced in him to become a paramedic as a way of dealing with the pain, and ultimately start his own company. In his latter career he was a vice president with Holy Redeemer Health System from which he recently retired.

The sense of a calling to the diaconate goes back many years for Kennedy, and it has now come to fruition. His experiences as a fireman, paramedic and hospital professional give him a unique preparation for this latest calling. 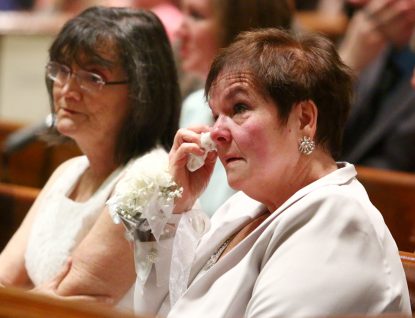 Dianne Kennedy is moved to tears during the ordination rite for her husband Patrick and his classmates.

All of the men of Philadelphia’s deacon class of 2017 are married, which is not unusual. Their wives were with them on every step of the journey and equal partners in the sacrificial demands of their formation and ministry.

Katherine Harrington, whose husband Kevin was ordained, agreed that the years of preparation were well worth it. “It was great and really good going through it,” she said. “I feel wonderful about it.”

Jenny Mars, the wife of Deacon Christopher Mars, said the process “was long, it was hard but worth it. I met a lot of good friends I feel we will know forever.” Deacon Mars is a steamfitter with contractor J.J. White, where his boss, Jim White, is also in the deacon formation program; they’ll be able to talk shop.

Cole Mars, one of Jenny and Christopher’s six children, is a chief petty officer in the U.S. Navy and attended the Mass in uniform. Of his father, he said, “It’s been a long time in the making and I’m proud of him. He will make a good deacon.”

At this time the Archdiocese of Philadelphia has about 285 permanent deacons with about 215 active and another 70 or so in formation, according to Deacon Michael Pascarella, the associate to the vicar for clergy in the Department of Permanent Deacons.

The process involves six years of study but totals seven years because there is a year in the acceptance process. While permanent deacons can be ordained at a minimum age of 35, most of the men at this time are in their upper 40s or older when they are ordained, Deacon Pascarella estimates.

Candidates who do not have a bachelor’s degree can’t receive a master’s but nevertheless they receive the same classwork. One of the matters to be determined mostly through testing in the pre-acceptance year is their ability to work at this level in parishes.

“Deacons have the faculty to preach and they (lead) RCIA and baptism classes,” Deacon Pascarella said. “If they are going to be qualified to exercise these faculties they must be able to preach at the same level as a parish priest. It should not be a watered-down theology. The needs of the Catholic community have evolved and the diaconate must evolve with it. We are looking for a theologically sound diaconate so that they can collaborate in the field with the priests.”

The current class of 12, which started with 22 men seven years ago, is entirely non-Hispanic Caucasians and all for suburban parishes. Part of this is due to population shifts with more Catholics in the suburbs than the city at this time.

Another cause may be that mostly college-graduated men who are married with children tend to move out of the city by the time their children reach school age. This was born out in this year’s ordination class, where several members indicated they were born in the city.

This has not gone unnoticed by the Department of Permanent Deacons.

“We are getting interest from the Haitian community and off and on from the Vietnamese,” Deacon Pascarella said. “Our biggest need is in the Hispanic community.”

Among outreach efforts in the future, the permanent deacons department hopes to coordinate with the Vocations Office for the Diocesan Priesthood. Perhaps if there is a father and son night, a deacon could speak to the fathers. Also with the annual ManUp Conference the diaconate office may take a table among the vendors.

Overall, “the diaconate is growing and Archbishop Chaput has given us tremendous support,” Deacon Pascarella said.

Actually this year is a real milestone for the permanent diaconate itself.

“June 18th is the 50th anniversary of Pope Paul VI’s motu proprio Sacrum Diaconatus Ordinem which restored the permanent diaconate worldwide,” Deacon Pascarella said. “Next year we will celebrate its 50th anniversary in the United States.” 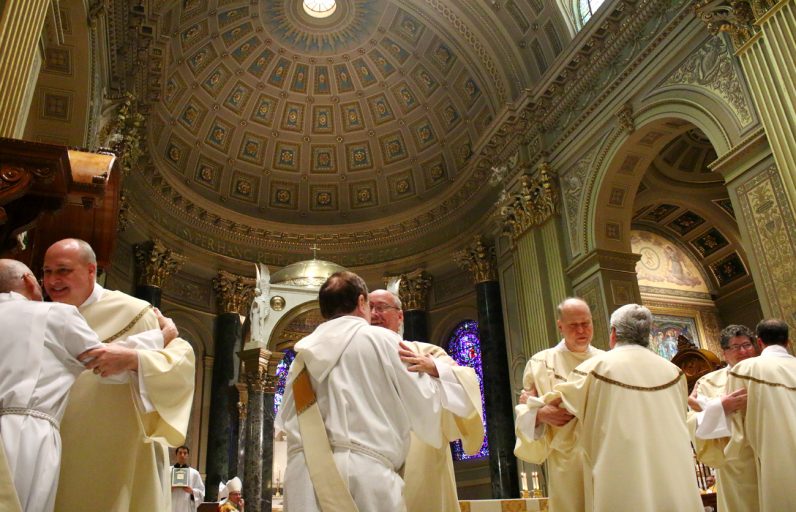 NEXT: Villanova University conference explores intersection of faith and sports