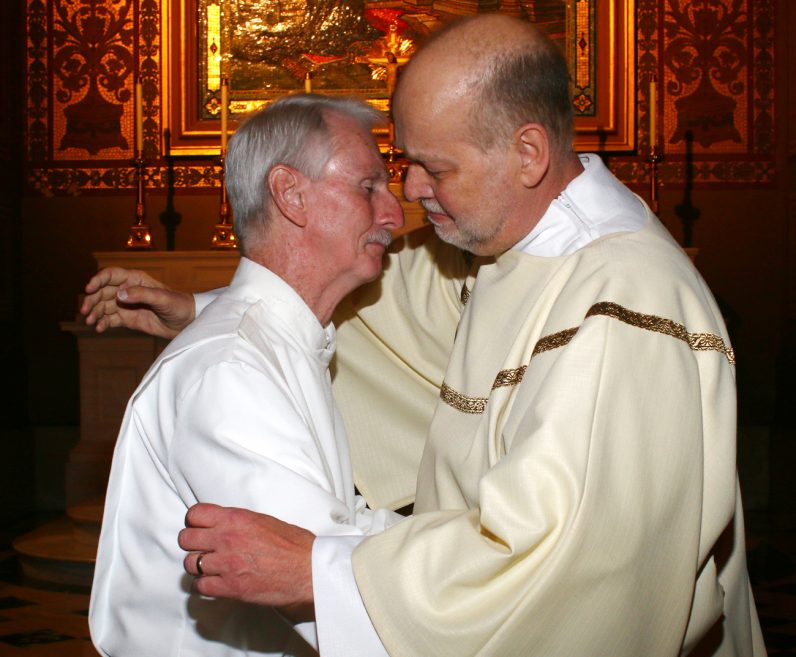 Deacon Jack Pfeifer, right, reaches out to his friend Joe Murphy, who proclaimed a reading during the permanent deacon ordination Mass June 10 in the Cathedral Basilica of SS. Peter and Paul. (Sarah Webb)

There were 13 very special people in the Cathedral Basilica of SS. Peter and Paul on Saturday, June 10. Twelve of them were the candidates, who after years of prayer and study were about to be ordained as permanent deacons by Archbishop Charles J. Chaput.

The 13th, whose name was not in the program, climbed the steps to the pulpit and proclaimed the first reading. That was Joe Murphy, who never achieved his own goal to become a permanent deacon, but whose sacrificial gift of a kidney enabled Jack Pfeifer to do so on this day.

Joe, who is originally from St. Cyril Parish in East Lansdowne and currently a member of St. Joseph Parish in Collingdale, is a retired mailman who still works part-time helping funeral directors through various duties. He and his wife Christine have three adult children – Patrick, Theresa and Mary.

An active member of his parish, he was already in the diaconate program when their eldest child, Joseph, died suddenly in 2009. They were, as one can imagine, truly devastated.

Meanwhile Jack Pfeifer, a member of St. Andrew Parish in Newtown, entered the program to become a permanent deacon. He and his wife, Maureen, have two children, Dorle and John.

Jack was a machinist, blue collar for most of his career. But he went to college part-time and graduated college the same year as his daughter did, and his company promoted him to management as payroll supervisor. Also an active member of his parish, he entered the diaconate program two years behind Joe Murphy but they really never met. 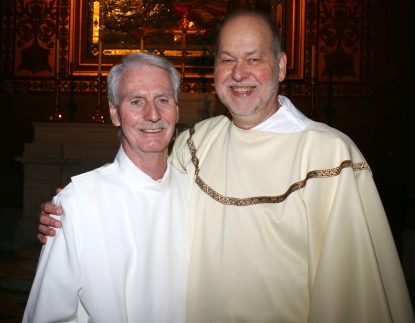 It was a shock to Jack when his kidneys started to fail and he was on dialysis when the diaconate program put out a bulletin asking for prayers for him. Without a kidney transplant his prognosis was grim.

Joe Murphy saw the message and not only prayed, he got Jack’s phone number and called. Could he do anything, maybe drive him to medical appointments or mow his lawn, whatever?

Jack was grateful for the offer but assured him that he had a dialysis machine at home so he didn’t have to go out, and his chores were already being cared for. He was just waiting and hoping a donor match for a kidney would be found. His son had volunteered, but he developed diabetes and was unsuitable as a donor.

Joe Murphy thought about it and decided, “why not get tested?”

If he could donate a kidney it would be a way to honor the memory of his deceased son. The results came back and he was a perfect match.

Joe talked to his wife and other children and they agreed because they knew if he didn’t do it and Jack died, Joe would blame himself. 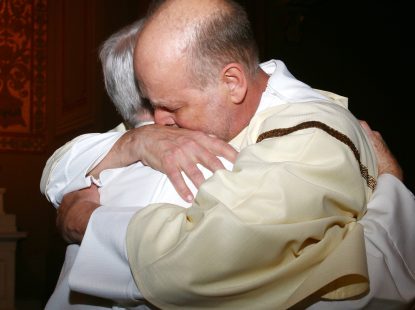 As for Jack, he well understood Joe was placing his own health at risk and assured him that he perfectly understood if he didn’t go through with it.

Joe was determined and refused to think about the risk. The operation was performed in October 2010.

At age 63 he was the oldest living kidney donor ever up to that point at the Hospital of the University of Pennsylvania. It was a complete success although Jack had to follow up with a pancreas transplant. Before agreeing to the operation he asked Joe’s permission because if something went wrong he didn’t want Joe to think his sacrifice was for nothing.  With prayer, that operation was also a success and he resumed his studies toward the diaconate.

Joe didn’t fare as well. He began to lose weight and ultimately had to discontinue his studies for the diaconate. He doesn’t blame it on the sacrifice of his kidney, he believes his health problems really began with stress after the death of his son.

The two men and their wives have formed an enduring friendship with one another.

“Jack is my brother through another mother,” Joe Murphy declared.

As the date of Jack’s diaconate ordination drew near, he asked permission for Joe to read from Scripture at the ordination Mass, and it was granted. Joe also read at Jack’s first parish Mass the next day.

“If it wasn’t for him I wouldn’t be alive,” Jack said. 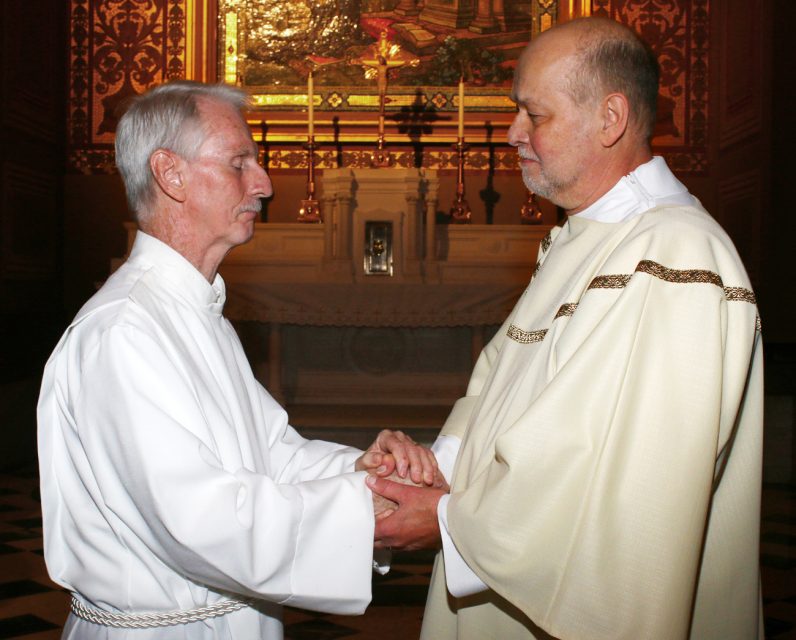 Joe Murphy, left, congratulates his friend Jack Pfeifer on his ordination to the permanent diaconate June 10 at the Cathedral Basilica of SS. Peter and Paul, Philadelphia. (Sarah Webb)

NEXT: In new role, Lizanne Hagedorn leads work of feeding the needy