The hardest talk: Racism in parishes 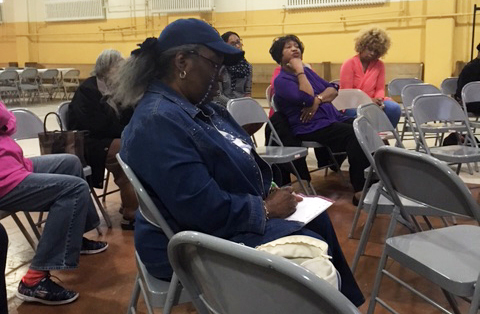 Participants in the session “Racism and Prejudice in Our Parishes” take notes for discussion in the final part of this year’s series, “Conversations on Race in Our Country,” held May 22 at St. Athanasius Parish, Philadelphia.

Catholics from across the Philadelphia Archdiocese are now applying what they learned from the four-part series, “Growing in Racial Harmony within the Catholic Church,” held this year in several parishes. Because it took a hard look at a fundamental unit of church life, the final session “Racism and Prejudice in Our Parishes” may be one of the most challenging to implement.

It examined differences in ethnicity and social class within church communities, especially those without ethnic diversity.

Although the last session was held May 22 at St. Athanasius Parish, in Philadelphia’s West Oak Lane section, the implementation of the series is ongoing, say those who attended.

(See related stories on the kickoff of the series in January and a follow-up session on race.)

Janice Paige, a member of St. Athanasius, said the May discussion was the most important of the four-part series on race because it is one that is often “swept under the rug.”

Paige believes this is because in society, and even within Catholic parishes, racial differences are more obvious. Many people, she believes, do discriminate against those who have different levels of education, types of job or even the parish one belongs to.

“I wish more people were here,” Paige said of the group of about a dozen attendees. “What was good was that people really talked about things we don’t always talk about regarding our churches. I hope we do something about this because if people don’t feel a part of the church they will leave.”

“We need to resolve these issues,” said Marietta Shipanga, another St. Athanasius member who was very vocal during the session regarding respect for ethnic and class diversity. “We should not have these problems if we are truly practicing our faith. We have to address these problems.” 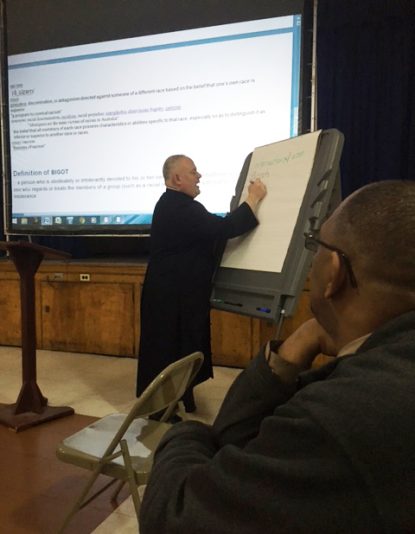 Father Joseph Okonski, pastor of St. Athanasius, uses a PowerPoint presentation and feedback to lead the discussion on racial issues.

Father Joseph Okonski, pastor of St. Athanasius, led the workshop and began with a PowerPoint presentation defining words like “bigot.” He then asked those present to list some of the issues that divide people.

After much discussion the group came up with three major challenges: prejudices against foreigner, especially those from the Caribbean, South America and Africa; social class distinctions; and not willing to associate with those from other parishes, particularly when parishes merge.

Much of the conversation involved how to have a welcoming spirit among those who may not share the same social class or ethnic heritage. Another point was the need to see fellow Catholics as individuals rather than stereotypes.

“Most of the time when we see Africa in the media we see these starving children with flies (swarming) around them,” Okonski said. He has traveled to West Africa several times and seen the region’s mega-cities. He stressed the need to expand one’s limited mindset in assuming that an African Catholic, for instance, is coming from a poverty-stricken background and not a developed, urban environment.

The priest reminded the attendees that some immigrants are not documented and this may cause them to be wary of socializing with residents of a community here. He insisted that they may want to become more in the life of the parish, but they are cautious of whom they can trust.

Conversely, Father Okonski pointed out that one should not assume that any parishioner with an accent is undocumented. He said that in predominantly African American parishes, most members from the Caribbean and Africa have legal documentation.

He also pointed out that those from Puerto Rico, the U.S. Virgin Islands and other American territories are American citizens.

Maunta Brice suggested that local parishes should allow even those with thick accents to take active parts in the church’s liturgy, including by proclaiming the readings. Other people suggested the need to listen more attentively to those with accents rather than saying, “I cannot understand what they are saying.”

Many pointed to issues like education, judging others based on the neighborhood they live in or excluding others based on age, especially regarding young people. One parishioner from West Philadelphia agreed. He said that some will refer to parishes as “ghetto churches” and “bourgeoisie churches.”

Deacon Bill Bradley, the most recent director of the Office for Black Catholics, piggybacked on the comments around “clerical bias.” He said he has come across those who feel that ordination sets one apart as a Christian.

“They will tell me that you are ordained so you know more than me, which is not always the case,” Deacon Bradley said.

The session concluded with the hallmarks of the Christian faith: charity and unity.

“This has been a good series,” said Charlene Cornish. “We need to come together in love. We need to love others as we love ourselves. We cannot afford to have all these divisions when we are supposed to be one universal faith.”

NEXT: For a century, Puerto Ricans have shared faith, citizenship