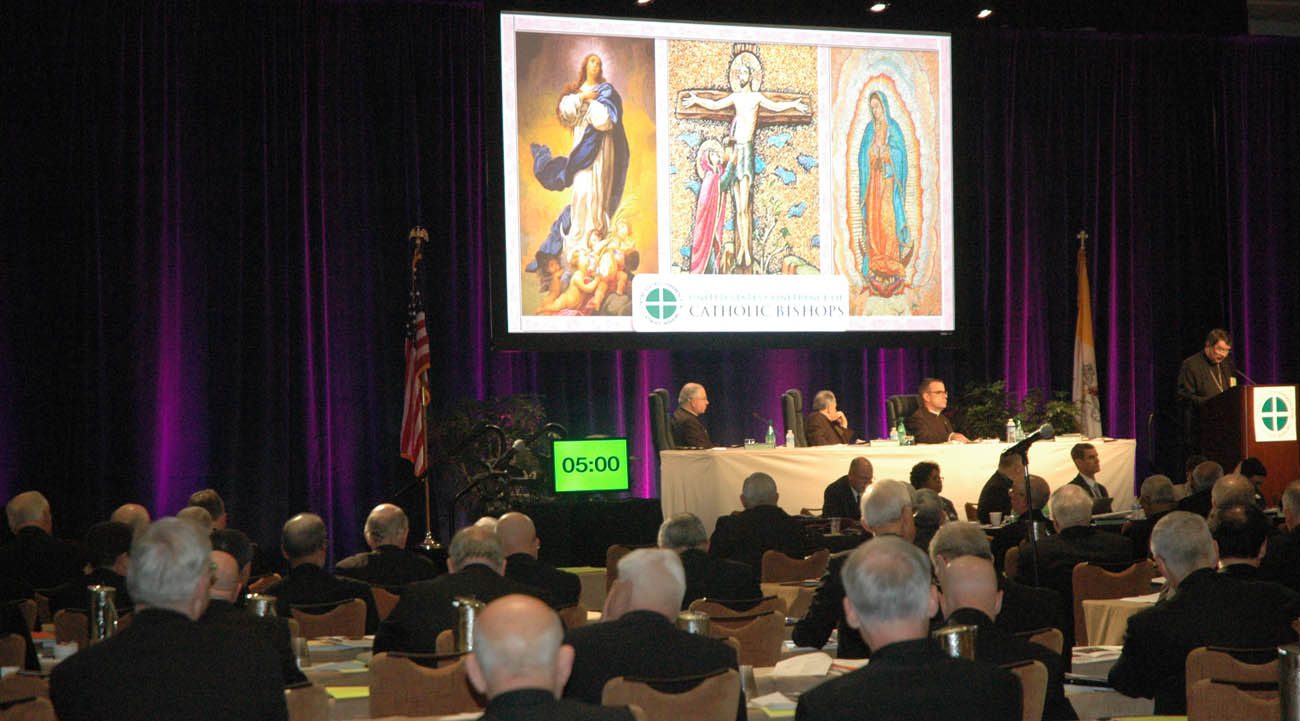 Prelates listen to a speaker June 15 during the U.S. Conference of Catholic Bishops' annual spring assembly in Indianapolis. (CNS photo/Sean Gallagher, The Criterion)

The 132-53 vote came on the second day of the bishops’ spring assembly in Indianapolis. There were five abstentions. A simple majority was required for approval.

The bishops’ action came less than a week before the start of the U.S. Conference of Catholic Bishops’ fifth annual Fortnight for Freedom June 21-July 4. It is a two-week period of prayer, advocacy and education on religious freedom.

Before the vote, Baltimore Archbishop William E. Lori, chairman of the committee since its creation in 2011, spoke in favor of making it permanent, arguing the need for the body stretches beyond the specific legal and public policy issues challenging religious freedom that continue to emerge.

“Rather, the very idea of religious freedom and its roots in human nature is challenged,” he said, “along with the right of religious people and institutions to raise their voices in the public square and to perform ministries that serve the common good in accordance with their religious and moral convictions.”

Archbishop Lori also expressed his hope the ad hoc committee’s work up to now and in the future would help “plant the seeds of a movement for religious freedom, which will take years of watering and weeding in order for it to grow, to grow strong and to bear fruit.”

“In the face of these challenges, our voice is vital,” he said. “Debates about religious freedom in our country are often, sadly, polarizing. In our tumultuous political culture, Catholic laity must be equipped to participate in conversations about the future direction of our country.”

Archbishop Lori will celebrate the fortnight’s opening Mass the evening of July 21 at the Basilica of the National Shrine of the Assumption of the Blessed Virgin Mary in Baltimore. The archbishop will celebrate a special closing Mass July 4 in Orlando, Florida, during the Convocation of Catholic Leaders.

In the discussion that followed Archbishop Lori’s presentation, some bishops spoke in favor of establishing a standing committee on religious freedom. Among them was Washington Cardinal Donald W. Wuerl.

“The challenge to religious liberty is a growing one,” he said. “The dominant culture increasingly now finds that it’s not just a matter of disagreeing with religious principles and positions. But there’s a certain level of hostility becoming more and more evident. … This problem is not going to go away.”

Cardinal Timothy M. Dolan of New York, who was USCCB president when the ad hoc committee was created, also spoke in favor of making it permanent.

He noted that bishops around the world “look to us in the United States (as) real quarterbacks when it comes to the defense of religious freedom” and added that “ecumenical partners how deeply they cherish our leadership on this issue.”

“I think it’s enhanced the cause of interreligious and ecumenical dialogue, because we’re not the only ones concerned,” Cardinal Dolan said. “So, we need some permanence. We need some stability. And I think this is the way to go.”

Some bishops felt the ad hoc committee did not need to become permanent because they felt religious liberty could be addressed by existing standing committees.

Cardinal Joseph W. Tobin of Newark, New Jersey, also noted that it was “very unfortunate” that the vote on the committee was taking place a day after the bishops allowed its working group on immigration to cease to exist.

However, after the vote on the committee, Cardinal Daniel N. DiNardo announced he would allow the working group to continue its efforts, prompting applause from the bishops.

In a news conference after the meeting session, Archbishop Lori said he was grateful “it was not a pro forma discussion, but rather an opportunity for bishops in a wonderfully respectful and dialogic way, to express their views about” religious liberty.

“It’s a big step to establish a standing committee,” he said. “And so no one would expect it to be a walk in the park.”

NEXT: Bishop Cantu reports on unrest, religious persecution around globe