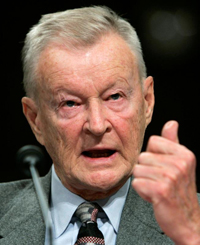 WASHINGTON (CNS) — Zbigniew Brzezinski, who served as national security adviser to President Jimmy Carter and was a noted author, lector and statesman, was remembered at his June 9 funeral Mass as brilliant political strategist who was deeply committed to his Catholic faith.

“Dr. Brzezinski was indeed a man of faith. His faith influenced his whole life,” said Msgr. W. Ronald Jameson, rector of the Cathedral of St. Matthew the Apostle. “We celebrate the life Dr. Brzezinski had for many years … and we celebrate his new life, his eternal life.”

Brzezinski, 89, died May 26 at Inova Fairfax Hospital in Falls Church, Virginia. The cause of death was not reported.

Msgr. Jameson was the principal celebrant of Brzezinksi’s funeral Mass at the cathedral. More than 500 people -­- including former President Jimmy Carter and former Secretary of State Madeleine Albright ­– attended the liturgy.

Carter, who referred to Brzezinski by his nickname “Zbig,” said his former national security adviser “was a man of wisdom and sound judgment shaped by his faith.”

“He was always provocative, always entertaining and always funny,” Carter said at the end of the funeral Mass. “He shaped events of the world in a profound way.”

The former president said that the late statesman was instrumental in crafting many of his administration’s foreign policy efforts, including: normalizing U.S. relations with China; nuclear disarmament; working for peace in the Middle East; entering into a Strategic Arms Limitation Treaty, or SALT II, with the then-Soviet Union; handing over control of the Panama Canal to that Central American country; and championing human rights around the globe.

Zbigniew Kazimierz Brzezinski was born in Warsaw, Poland, March 28, 1928. In 1938, he moved with his family to Canada when his father, Tadeusz Brzezinski, was appointed as Poland’s consul general to that country. The family remained there after Germany invaded Poland.

Brzezinski earned a master’s degree in political science from Montreal’s McGill University, and a doctorate degree in government from Harvard University. He taught at Harvard and Columbia universities.

Cable television personality Mika Brzezinski called Brzezinski “the most inspiring, loving and devoted father any girl could ever have.”

Brzezinski became an American citizen in 1958. As Carter’s foreign policy adviser, he was instrumental in brokering the 1978 Camp David Accords. Those accords — signed by Egyptian President Anwar Sadat and Israeli Prime Menachem Begin — led to a peace treaty between the two countries.

After Carter left the White House, he and Brzezinski kept a close relationship over the years.

“He was an important part of our lives for more than four decades and was a superb public servant,” Carter said in a statement. “He was brilliant, dedicated, and loyal, and remained a close adviser. I will miss him.”

In 1981, Brzezinski was awarded the Presidential Medal of Freedom, the nation’s highest civilian honor. The award recognizes “especially meritorious contribution to the security or national interests of the United States, or world peace, or cultural or other significant public or private endeavors.”

Albright, who was a student of Brzezinski when the statesman taught at Columbia University and who served under him as a member of the National Security Council from 1978 to 1981, recalled that “my mentor, boss and friend” was “a brilliant man and an intellectual tour de force.”

“Zbig was truly remarkable. He embraced the idea that support of human rights served America’s interests,” Albright said. “He was unflappable.”

She added that “Zbig did more to shape my view of the world than anyone besides my father.”

Brzezinski is survived by his wife, his children, several grandchildren and his brother, Lech, who served as a lector at the funeral Mass.

He was cremated and his inurnment was private.