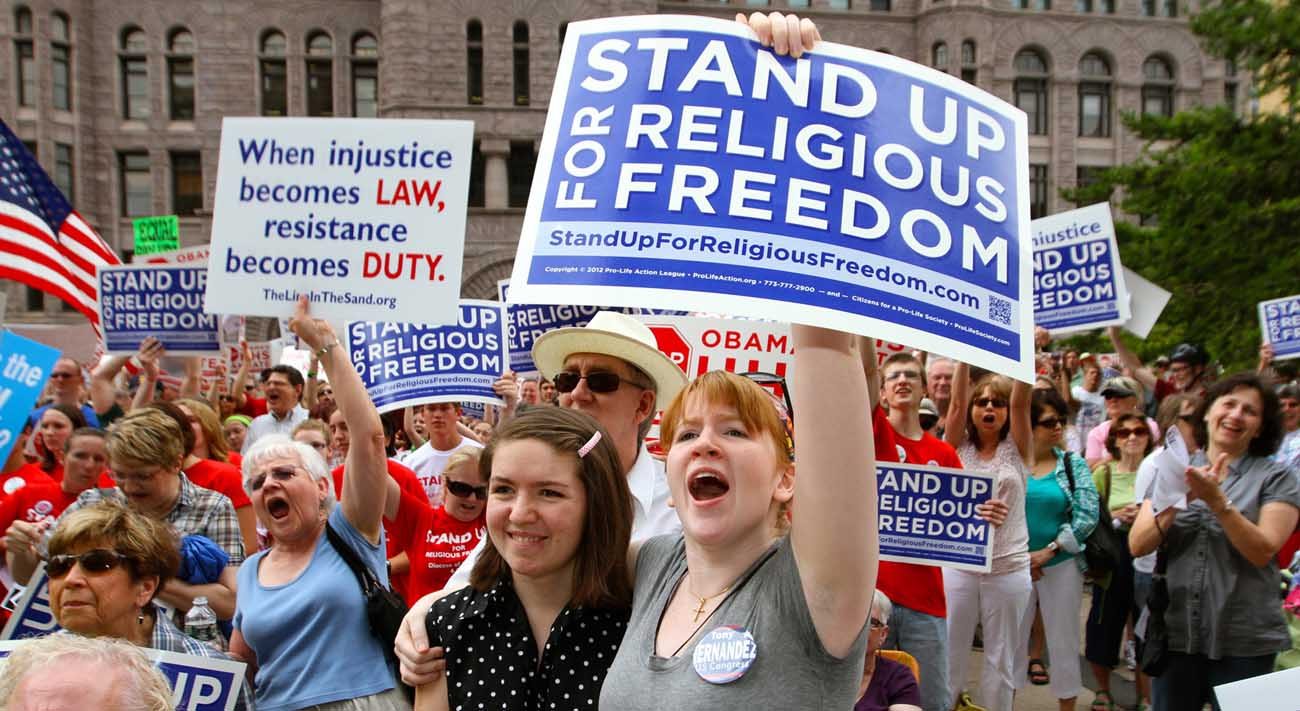 People display signs showing their support for religious freedom during a 2012 rally in downtown Minneapolis. It has been 20 years since the International Religious Freedom Act was passed by Congress and became law. (CNS photo/Dave Hrbacek, The Catholic Spirit)

WASHINGTON (CNS) — It has been nearly 20 years since the International Religious Freedom Act became law. Organizers of a forum at Georgetown University thought it a good time to see how the religious freedom landscape worldwide has changed since 1998.

Passed by overwhelming majorities in both houses of Congress and signed into law by President Bill Clinton that year, the U.S. law created a multifacted system for promoting religious freedom as part of U.S. foreign policy, monitoring religious persecution in foreign countries and advocating on behalf of individuals persecuted in other countries for their religion.

At the forum, while the view wasn’t always encouraging, speakers professed hope for the future — along with a side dish of skepticism.

Andrew Bennett said those concerned about the issue should ask whether they ought to be similarly concerned about protecting religious beliefs of someone in another country as they are about fighting political discrimination against individuals overseas. He had been the first ambassador for religious freedom within Canada’s foreign ministry, from 2013 to 2016 — until the Cabinet position created by the Conservative Party was abolished by the Liberal Party government of Prime Minister Justin Trudeau.

“We in Canada are increasingly vague as to what those answers should be,” said Bennett, now a research fellow at the Religious Freedom Research Project of Georgetown’s Berkley Center for Religion, Peace & World Affairs, which sponsored the forum.

Canada’s founding story, he noted, is quite different from that of the United States, whose first refugees were those who fled England because of religious persecution, Bennett said at the forum, “Best Practices in International Religious Freedom Policy.”

Bennett cited “ignorance of religious faith and tradition” for liberal Western democracies being diplomatically tone-deaf on the matter. A “narrowing of our understanding of human rights” that may leave religious freedom out of the picture can result, he said. “We should not be equating freedom of expression with freedom of religion,” Bennett added.

Kristina Arriaga de Bucholz, a Cuban-American who is a member of the U.S. Commission on International Religious Freedom — created as a result of the 1998 law — said her experience working in the Reagan-era State Department led her to believe that “giving a religious freedom speech was a career-killer — and still is.”

Religious freedom does not always get the high priority it deserves, according to Arriaga, who noted that women’s rights trump religious freedom among key decision-makers.

In other cases, countries enforce restrictions based on religion. In Saudi Arabia, she said, “women cannot get surgery unless they have permission from a (male) guardian,” which Arriaga held as an interpretation of religious codes in the predominantly Muslim nation. Americans looking to make trade deals in that country, she added, may look askance at its “open for business” sign because of these and similar religion-based restrictions.

Tom Farr, director of the Religious Freedom Research Project and forum moderator, noted that nations that give greater religious freedom to its people are both more stable and more attractive trading partners.

Arriaga outlined several suggestions for improving U.S. analysis of religious freedom issues in other nations. One was to develop an “international balancing test” for the issues involve to avoid the dangers of missteps on religious freedom, calling for more comprehensive education for diplomats and others receiving foreign postings.

“We should all be principled” in international dealings, Arriaga said, such as taking Iran to task for its treatment of Baha’is living there despite the lifting of U.N. sanctions against Iran in 2015. And “raise religious freedom to the seventh floor always,” where the secretary of state’s office is in the State Department building in Washington, she added.

Rabbi David Saperstein, now a senior fellow at the Religious Freedom Research Project after his term ended earlier this year as U.S. ambassador at large for religious freedom — another outgrowth of the 1998 law — said he had then-Secretary of State John Kerry’s ear on religious freedom issues during his tenure.

He said one reason he accepted the appointment was because he was promised “structural access” to Kerry, adding Kerry would get back to him within 30 minutes on notes he had written.

Kerry set up the office on global religious freedom and that it had worked well. But “it’s not enough to talk theoretically about the role of religious freedom in statecraft,” Rabbi Saperstein said. “These issues really had to be woven in at the macro level.”

No replacement for Rabbi Saperstein has been nominated yet, but rumors were circulating aloud during the forum, and Arriaga even gave the initials of who she believed would be President Donald Trump’s nominee.

Rabbi Saperstein cautioned that diplomats have to avoid being seen as “Western imperialists” by extremists in any one country by the mere giving of assent to an event or initiative in that country that promises to expand religious freedom within that country which would win approval by its moderates. Even so, he said, “I was encouraged by how many people wanted our support, our stamp of approval.”

He added, “There are times when the tools that we have really make a difference,” referring to sanctions or the threat to apply them. “I don’t think we use the tools nearly as well as we can.”

“We feel that the problem is too large and it’s impossible to do well. That’s not true,” Arriaga said. “It is our right to live according to our deeply heal convictions. It’s our duty to defend those to others.”