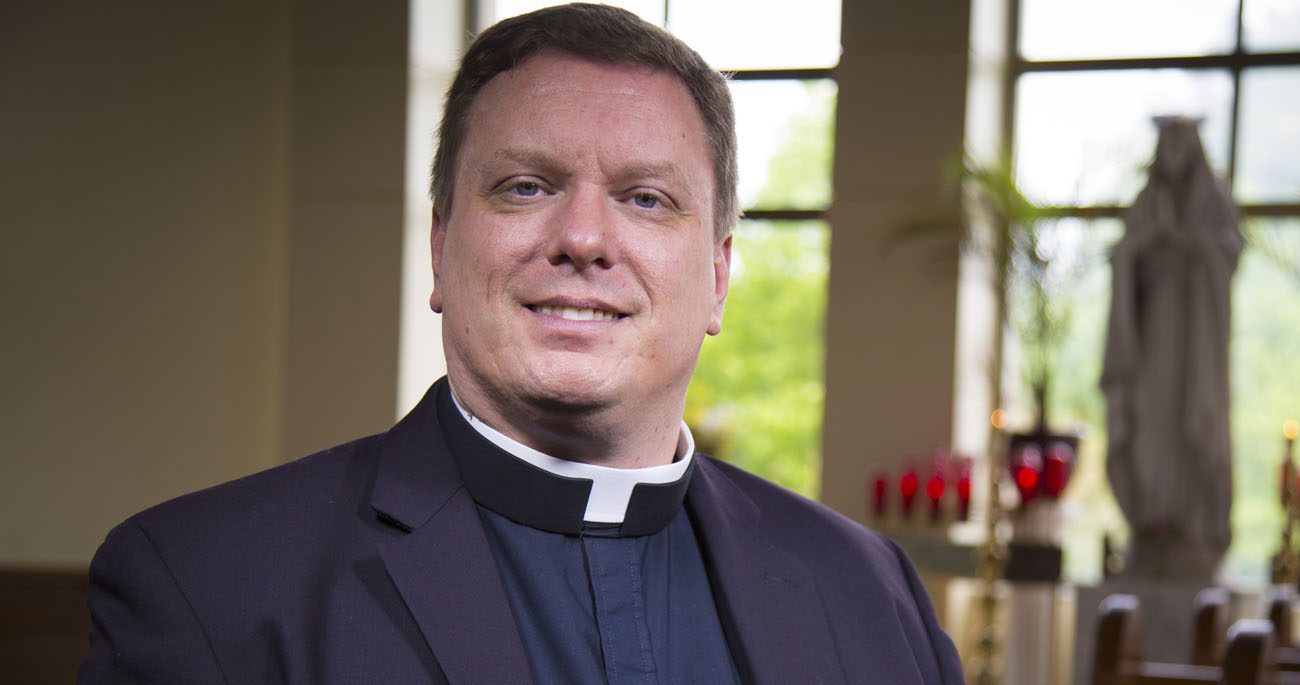 Father Mark S. Bialek is pictured after Mass May 23 at St. John Catholic Church in Westminster, Md., a parish where he is pastor. Father Bialek has been chosen as one of the Archdiocese of Baltimore's delegates to the Convocation of Catholic Leaders being held in Orlando, Fla., July 1-4. (CNS photo/Chaz Muth)

WESTMINSTER, Md. (CNS) — For Father Mark Bialek, being a priest means enabling his parishioners to evangelize in new ways.

“We can’t just sit comfortably anymore in our parishes and our chanceries and in our homes, but we have to actually go to where the sheep are,” Father Bialek said, comparing the church to a flock.

Father Bialek will attend the “Convocation of Catholic Leaders: The Joy of the Gospel in America,” a national gathering in Orlando, Florida, from July 1-4, to learn about evangelization and share ideas with other Catholic leaders.

The invitation-only convocation aims to equip attendees with strategies and best practices for preaching the Gospel in a way that reaches today’s culture. It is based on Pope Francis’ apostolic exhortation “Evangelii Gaudium” (“The Joy of the Gospel.”)

Father Bialek told Catholic News Service he has high hopes for the convocation.

“I think it’s going to be a time of renewal where we go from maintenance to mission,” Father Bialek said. “It’s no longer business as usual within our parishes and within our dioceses. We have to respond to the call of the Gospel in our own day and in our own age and find a way of proclaiming the Gospel in a way that people hear.”

In his 11 years as a priest in the Archdiocese of Baltimore, Father Bialek said he has learned that it’s important to be vulnerable and courageous and continually to evaluate his parish’s work as a missionary vehicle.

He hopes to share this knowledge with the other participants at the convocation.

“Pope Francis said that he wants pastors that have the smell of the sheep, so I’m hoping that I’d be able to bring the experience of working in the parish, ministering every day,” Father Bialek said.

The convocation will include several sessions dedicated to healing the wounds left by the clergy sex abuse scandal that gained international attention in 2002.

Healing these wounds has always been part of Father Bialek’s ministry: He was entering the seminary just as the revelations began to come out.

“I think it was a very unsettling time where there seemed to be more questions than answers. There was a lot of anger that was coming, too, from all directions,” he said. “To understand where those emotions were coming from, to understand the experiences that some people had unfortunately gone through, the hurt and pain that people had experienced, there was no getting away from it.”

The priest said it gave him hope to see that even as the scandal continued to be uncovered in different cities, men continued to come to the seminary.

“I think the discussion was, how can we bring healing and comfort to those who have been affected and be agents of change within our ministry? And we kind of realized that this was going to take a lifetime,” Father Bialek said.

He said it comforted him to think of the priests who had impacted him positively when he was young, like Father David Leary, who had talked with Father Bialek and the other altar servers about the faith and his different ministries.

“As I grew up and as I got more involved in the life of the parish, I wanted to be more like Father Dave,” Father Bialek said.

Now, Father Bialek wants to provide that same kind of nurturing environment in his own parish.

“I truly feel a mission and a call to be a witness of joy, to proclaim the Gospel and to make sure the parish is an environment where all are protected, where dignity is upheld from the youngest to the most seasoned parishioner,” Father Bialek said.

He said Pope Francis is leading a renewal in how the public views the church.

Since the pope’s election in 2013, Father Bialek said he has seen more people returning to Mass and the sacraments, a change he attributes to Pope Francis’ example.

“I think that if we can just get a glimpse, a glimmer, just a spark from his apostolic ministry and we can translate that back to our own dioceses and our own parishes, I think the church is going to be alive and well,” Father Bialek said.

NEXT: Medieval traditions used by Luther to form his stance on justification