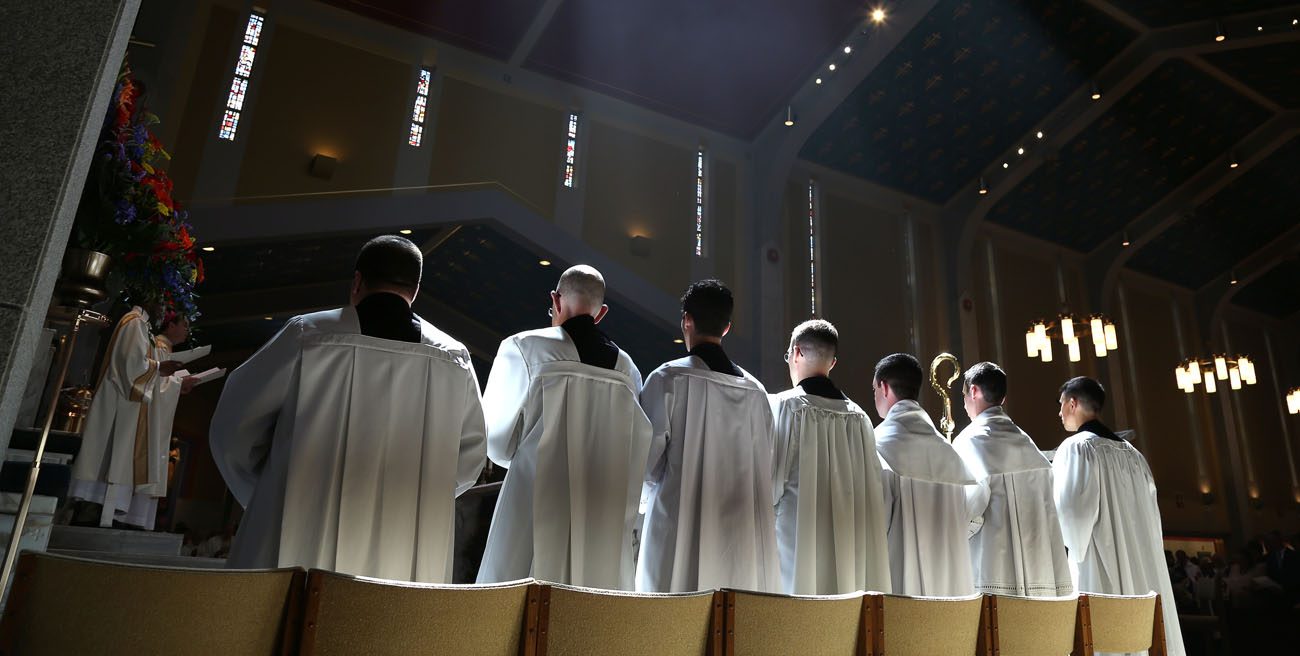 Alter servers are seen during an ordination Mass at the Cathedral of St. Thomas More in Arlington, Va., June 10. (CNS photo/Tyler Orsburn)

WASHINGTON (CNS) — After almost 12 years as an Episcopal priest, Deacon Jonathan Erdman entered into full communion with the Catholic Church along with his family in 2016 and a year later, he is becoming a Catholic priest.

He will be ordained a priest of the Personal Ordinariate of the Chair of St. Peter June 29.

This spring, 590 men entered the priesthood in dioceses throughout the United States, according to a report released by the U.S. Conference of Catholic Bishops in Washington. The report is based on an annual study that the Center for Applied Research in the Apostolate conducted for the USCCB.

Leading to his joining the Catholic Church, Deacon Erdman felt something in the background repeatedly calling him to the church, but he said he continually found new ways to distract himself.

“I think often when one hears God calling, a response can be thinking of an excuse,” Deacon Erdman said in a phone interview with Catholic News Service June 14. “Moses said he didn’t have the ability to speak, Jeremiah claimed he was too young, and even Peter asked Jesus to depart because he felt unworthy. I distracted myself with my work in ministry. I told myself that I was needed where I was.”

He recalls teaching a yearly presentation on “What Is the Episcopal Church?” at St. Meinrad Archabbey and Seminary in Indiana. “One of my students joked that it seemed I wanted to be a bit more Catholic with each passing year,” Deacon Erdman said.

Events such as the election of Pope Francis allowed Deacon Erdman to see the unity of the Catholic Church through devotion and prayer, gradually leading him to the doors of the Catholic faith.

The first time Deacon Erdman attended Mass while beginning the discernment process, it happened to be on the feast of the Chair of St. Peter, the namesake feast of the ordinariate of which he will soon become a part.

Based in Houston, the Personal Ordinariate of the Chair of St. Peter is similar to a diocese, but national in scope. It was established in 2012 by the Vatican earlier this year to facilitate and shepherd communities of former Anglicans wishing to join the Catholic faith while retaining elements of their Anglican heritage and traditions.

After his priestly ordination, he will serve the Community of Our Lady and St. John in Louisville, Kentucky.

Six months after Father Andrew Dawson entered the Catholic Church at Easter 2006, people began to ask him if he had thought about joining the priesthood.

According to the USCCB report on the ordinand class of 2017, 87 percent of men were encouraged by an average of four people to enter the priesthood.

“I remember very vividly sitting up in bed one night, bolt upright, thinking to myself, ‘All these people have said these things and not one time have I ever said no,'” Father Dawson said to CNS June 14. “All I’ve done is make a joke of it, and just dismiss it. I realized that the reason that I hadn’t been able to say no to anyone is because I was asking myself the same question.”

The priesthood eventually became all that Father Dawson would think of in his free time.

Before entering the seminary, Father Dawson worked as an associate director at a Catholic youth camp, Sancta Maria, in Gaylord, Michigan. His experience working at the camp drastically influenced his faith life, as the camp began his intellectual conversion to the Catholic Church.

It was in the chapel at Sancta Maria that he truly came to experience the reality of the presence of Christ in the Eucharist. “I didn’t know what was happening, but I knew that what I was looking at was not what I had believed it to be previously,” Father Dawson said. “I needed to go and investigate that…it was so powerful to me.”

Being in the Archdiocese of Detroit also has brought Father Dawson close to the late Capuchin Father Solanus Casey, who will be beatified in Detroit in 2017. Father Dawson wore a relic of Father Casey during his ordination and will serve at St. Fabian Parish in Farmington Hills, Michigan.

Father Steven Oetjen’s parents, along with those of 80 percent of the new ordinands, were both Catholic.

They raised Father Oetjen and his siblings in the church, sending them to Catholic schools and Mass every Sunday. But it wasn’t until Father Oetjen went off to study engineering at Carnegie Mellon University in Pittsburgh that he began to feel the call to the priesthood.

“Basically, I found myself thrown into this really competitive environment and a very demanding environment, with all the work of engineering it was very busy, very hard to find time for prayer,” Father Oetjen said. “It was also the first time that I was on my own without my family and I knew that I needed to really start to make the faith my own and if I wanted to take the faith seriously, my parents weren’t going to be there anymore to make me.”

Desiring to make his faith his own, Father Oetjen became involved actively with the Newman Center at Carnegie Mellon and he saw in his friends a joy in living a life of virtue that he, too, wanted for himself. It was in the chapel at the Newman Center that he encountered the Blessed Sacrament.

“I found that there in the chapel with the Blessed Sacrament exposed on the altar in the monstrance, it was the perfect place for me to go every day to encounter our Lord Jesus Christ and to just spend time with him in silence and to pray to him, telling him about all my struggles and challenges, asking him for grace,” Father Oetjen said. “That helped me immensely.”

This devotion to the Blessed Sacrament eventually revealed a little tug on his heart that Father Oetjen felt and discovered to be God calling him to the priesthood.

“Seeking the Lord out in silence and in prayer really filled a gap that was much needed in my life at the time, and it is always there, I always need to pray,” Father Oetjen said. “But I also think it’s a joy that is always going to be growing and it’s a joy that doesn’t mean that everything is always happy go lucky, all the time but even through ups and downs, its an underlying joy, it’s a peace.”

Like 43 percent of those ordained this year, Father Oejten finished his undergraduate degree before entering the seminary.

“I’ve really been in awe now that I’m able to celebrate Mass every day,” Father Oejten said. “I’m looking forward to every day for the rest of my life, God willing, to being able to celebrate the holy sacrifice of the Mass, to preach and teach God people to help them receive the sacraments as fruitfully as they can so that all the grace that God wants to give them can flourish in their lives.”

Father Oejten was ordained June 10 in the Diocese of Arlington, and he will serve at St. James Catholic Church in Falls Church, Virginia.

PREVIOUS: Catholic church leaders call for dialogue between the U.S. and Cuba

NEXT: Consecrating FOCUS to Mary is ‘all grace,’ says apostolate’s CEO