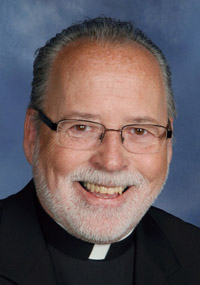 Born in Philadelphia, he was the son of the late John J. and the late Katherine C. (Granahan) Kelly.

He attended Epiphany of Our Lord School in Plymouth Meeting, Bishop Kenrick High School in Norristown and the Philadelphia College of Textiles and Science (now Philadelphia University).

After working in the secular world in several industries including his own company, “Plants by Kelly,” which supplied and maintained greenery in offices, he discerned his religious calling and entered St. Charles Borromeo Seminary in 1996.

He was ordained May 18, 2002 at the Cathedral Basilica of SS. Peter and Paul by Cardinal Anthony Bevilacqua.

“He came to realize God was calling him to the priesthood,” said his cousin, Father Sean Bransfield, also a priest of the Philadelphia Archdiocese. “He was in the same class as I was when he came in, pre-theology. I think his decision was really out of the blue to us in the extended family.”

Father Kelly loved his various assignments, according to Father Bransfield, and in turn he was loved by the students he taught and in the parishes where he served.

Within his immediate family he enjoyed golfing with his brothers. “He was probably the worst golfer among them, but he loved it and he had a good hearty laugh,” Father Bransfield recalls.

While he was only at St. Andrew’s for a year, he made a strong impression, according to the pastor, Msgr. Michael Picard.

“He was a good guy and he got close to all of us. He fit in very quickly and the people loved him,” he said.

“He was sensitive and compassionate with the people especially those in a difficult position. His homilies would always end with, ‘Just think about that.’ It was his trademark.”

At Epiphany, “He was only here two years but he made his mark,” said Gerri DelGiorno, a parish worker at Epiphany. “He was good with people and easy to get along with,” she remembers.

Father Kelly undertook needed upgrades to the parish and church, for example renovating the baptistery, but always conscious of cost and always finishing a task on budget.

“He was that kind of guy,” she said. “He was only here for two years and it is painful to lose him.”

A  viewing will be held for Father Kelly at Epiphany Church beginning at  4 p.m. on Monday, June 19, followed by a 7 p.m. Mass. There will also be a viewing on Tuesday, June 20 beginning at 9 a.m., followed by his funeral Mass celebrated by Bishop Timothy C. Senior.

Concelebrants will include Msgr. J. Brian Bransfield, Msgr. Picard, Father James Casey and Father Sean Bransfield, who will be the homilist.

NEXT: Father Luke Chow, Phila. priest and native of China, dies at 90