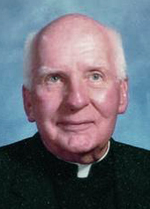 Msgr. Francis J. Statkus, 95, pastor emeritus of St. Colman Parish in Ardmore and a former chancellor for the Archdiocese of Philadelphia, died May 5.

He was then loaned to the Diocese of Little Rock where he served as judicial vicar for two years.

In 1959 he was sent to New York where he served as vice chancellor of the Military Ordinariate until 1971 when he was named chancellor for the Philadelphia Archdiocese. In 1984 he was named pastor of St. Colman.

Father Scott Brockson was ordained from St. Colman Parish and he remembers Msgr. Statkus as a good confessor who was faithful to the sick.

“He encouraged me to say the breviary in church in order to serve as an example to parishioners and motivate them to pray,” Father Brockson said.

He also remembers Msgr. Statkus as kind to others, for example the parish cook who was not Catholic. He or one of the other priests would drop her off at her Baptist church or drive her to doctor’s appointments.

“He was a true priest and servant of God,” Father Brockson said.

Msgr. Statkus was named pastor emeritus of St. Colman in 1996 and in his retired years he lived at St. Ignatius, Yardley, with the then-pastor Msgr. Samuel Shoemaker, a friend and successor to him as archdiocesan chancellor.

Father Andrew Brownholtz, currently the pastor of St. Ignatius and Father Anthony DiGuglielmo, the parochial vicar, only knew Msgr. Statkus for the past 11 months but they agree he was very much loved and he helped people quietly behind the scenes and was very prayerful. He continued to hear confessions regularly up to a few months before he died. And while he could not celebrate Mass he concelebrated with them.

Maria LaMantia, the parish secretary, remembers Msgr. Statkus for his kindness when she was pregnant. He would pray for her baby daughter and loved her after she was born 16 months ago. “He would give her a blessing every time he saw her,” LaMantia said.

Father Jonathan Dalin, who was stationed at St. Ignatius for four years, remembers how gracious and solicitous Msgr. Statkus was to him.

“He was concerned about everything, asking if it was going well,” he said. “No matter what his suffering he was always ready to serve the people. He had wonderful stories, and he always went wherever he was asked.”

There will also be a viewing at St. Ignatius at 10 a.m. Thursday, May 11, followed by his 11 a.m. funeral Mass celebrated by Bishop Timothy Senior. Concelebrants will include Fathers Brownholtz, DiGuglielmo, James Grant and Alan Okon, and Father Dalin, who will be the homilist.

NEXT: Father Kevin Kelly, pastor in South Phila., dies at 58