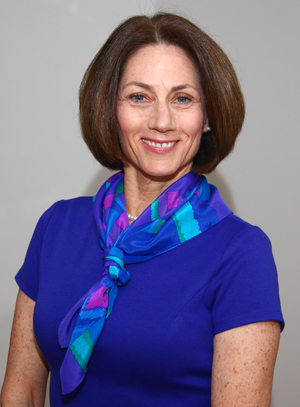 When Lizanne F. Hagedorn succeeds Lorraine M. Knight as executive director of archdiocesan Nutritional Development Services on July 1, she won’t need employee orientation. She started there as a college intern in 1979 and never left. Her current position is director of finance and administration.

NDS is best known for its work in serving children and others in need with healthy food-related resources. It does this mostly through the administration of federally funded nutrition programs but also through private donations.

It is clearly a happy shop and Hagedorn is not alone in her longevity – she will be just the third executive director, succeeding the deceased Patrick Temple-West and the retiring Knight.

A native Philadelphian from Immaculate Heart of Mary Parish, she grew up in Roxborough, the sixth of the seven children of Lavene and Paul Franzen.

Her sense of social justice was nurtured at the former Ravenhill Academy which was conducted by the Religious of the Assumption, and she represented her school at the 1975 beatification of now St. Marie-Eugenie Milleret, the congregation’s foundress.

“My inspiration is especially from the Religious of the Assumption,” Hagedorn said. “The thing that they imprinted on us as young women was to look beyond ourselves and see the needs and do something about it, using our talents, whether it is in the back room or up front.”

After Ravenhill, she entered then St. Joseph’s College, now University, in its Food Marketing Program. Although the emphasis of the program is preparing its students for careers in the corporate food industry that was never really her goal. “I was bucking the system,” she said.

When Patrick Temple-West offered her an internship at the very young Nutritional Development Services, she jumped at the chance. NDS is best known for its administration of school lunch programs and summer feeding programs funded by the U.S. Department of Agriculture throughout the area, not just for Catholic institutions and schools. Its mission goes much further than that.

“It was providence that I responded to the opportunity,” Hagedorn said. “Pat Temple-West had such a can-do spirit. There was something about Pat, he was so unassuming and never made judgments when people needed food.

“I also credit Bishop (Martin) Lohmuller. He has a lot to do with NDS getting started and Cardinal John Krol did much behind the scenes.” Most recently, Archbishop Charles Chaput has been a generous supporter, she explained, especially through arranging for additional funding that enables NDS to expand into areas that would not be covered by federal funding.

Although over the years Hagedorn ran a few programs at NDS, her role has mostly been behind the scenes in such necessary matters as administration, accounting and regulatory compliance.

“It is really making sure those who run programs have the tools needed to do their job,” she said. “We attract people who have generous hearts and want to do something. We are asking them to do what Christ directed, ‘Feed my Sheep.’”

In addition to her degree from St. Joseph’s, Hagedorn holds an MBA in finance from Drexel University and she is a senior fellow at the University of Pennsylvania’s Program for Research on Religion and Urban Civil Society.

On the personal side she is married to her husband, Ted, and they are the parents of three now adult daughters, Katie, Elle and Genevieve. The family has membership in St. Anthony Parish, Ambler, and over the years she has been an active volunteer in CYO and other youth and community service programs.

Patrick Temple-West, the founder and leader of NDS, died in 2009, and the work was taken up by Lorraine Knight, also a long-time veteran in administrative offices of the archdiocese.

“Lorraine has been fabulous,” Hagedorn said. “She advanced NDS and got us back on track after Pat’s death. When people talk about the lunch program they think of the archdiocese, not the federal government.”

For Liz Hagedorn the challenge remains the same at a time when it is estimated one out of four children in the Philadelphia area has insufficient food. She and her team at NDS believe it is the duty of all Christians, all people of good will, to do something to change that.

“Our goal is to carry out our mission effectively and efficiently,” she said. “We must use the resources we are given to answer people’s needs. Using what we have for the greater good is what it is all about.”

NEXT: David Ripsom believes in the product he leads: Catholic Charities