David Ripsom believes in the product he leads: Catholic Charities 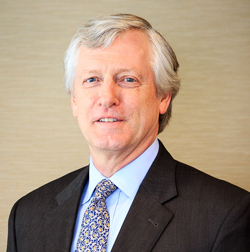 David B. Ripsom, board president of the Catholic Charities Appeal of the Archdiocese of Philadelphia.

David (Dave) B. Ripsom recently took the helm as board president of the Catholic Charities Appeal of the Archdiocese of Philadelphia, succeeding James P. Quindlan who served capably in that post for six years.

Ripsom brings with him a very important prerequisite for leading the appeal – a solid belief in the product.

Truly it is a matter of simply doing what Christ taught us to do, Ripsom maintains. “It gives us the blessing of sharing our blessings,” he said.

Currently a member of St. Cornelius Parish in Chadds Ford, Ripsom is originally from Long Island and has lived in this area since 1974. A lawyer by training, he was in private practice for 20 years with his eight years as a partner at the firm of Duane, Morris & Heckscher.

His most recent career was in industry with Nuclear Electric Insurance Ltd., a firm that specializes in insuring all nuclear power plants in the U.S. and many others around the world. He was president and CEO of Nuclear Electric when he retired two years ago.

He and Alice, his first wife, now deceased, were parents of three children, Meg, Matthew and Maureen. He now has four grandchildren. Alice died 11 years ago and Dave now co-facilitates a bereavement group he started at St. Cornelius. Six years ago he married his wife, Patricia.

“I have been twice blessed by two wonderful women,” Dave said.

He is also a lector and an extraordinary minster of holy Communion at the parish as well as a member of the Stewardship and Development Committee.

Although Alice and their children were Catholic, Dave, who was raised Episcopalian, did not became Catholic until 20 years ago and since then has actively embraced the faith.

Last year he started a project where 44,000 meals were packaged for refugee families in Africa. He has volunteered with Operating Base Cecilia, a Coatesville-based support program that with Catholic Social Services helps military veterans with their needs, and participated in three pilgrimages to Lourdes as a volunteer assisting pilgrims who have difficulty walking.

In addition to his work with the Catholic Charities Appeal he has been active in fundraising with Ursuline Academy where his daughters attended and also Cranaleith Spirituality Center in Philadelphia, among others.

The habit of personal charity was ingrained in Dave Ripsom and his family long before his conversion to Catholicism. For the past 30 plus years he and his spouses have practiced tithing.

“We felt this was important and as our good fortune increased our giving increased,” he said. “As you know it is biblical and it is a great Christian approach.”

While charity should be an important ongoing part of everyone’s life, it doesn’t have to stop there. One of the important factors in the Catholic Charities Appeal’s quest for achieving its goals is the inclusion of bequests, and several large bequests have been received so far this year.

Recent innovations in the appeal have been the promotion of the “Dollar a Day” donation plan as well as recognition of major donors through “giving societies,” which are listed in the 2016 annual report.

(Read more about the history of the appeal and innovations for 2016, here.)

But every donation, great or small, is important, Dave Ripsom believes. It is really doing God’s work.

NEXT: Phila.’s new D.A. relies on Catholic education to serve, not to judge